One on One: Natalia Almada and Dana Perry 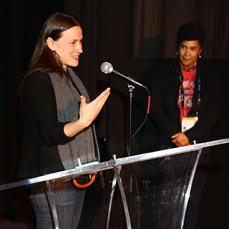 What makes a person want to reveal private family history to a wide public? What makes us want to watch a movie that accomplishes that act? Natalia Almada (El General) and Dana Perry’s Boy Interrupted) documentaries are unflinching, brooding, unapologetically dark, and personal. Almada, who won the Festival’s Directing Award: U.S. Documentary for El General, is the great-grandaughter of Plutarco Elías Calles, a controversial general during the Mexican Revolution and president of Mexico from 1924-1928. Calles’ daughter (the filmmaker’s grandmother) left behind audio tapes of her thoughts about Calles, tapes Almada uses as a beckoning, hypnotic narrative frame for the range of questions she articulates in the film about her family’s memory of Calles and Mexico’s collective memory of him. Boy Interrupted is Perry’s reconciliation with her 15-year-old bipolar son’s suicide. The film achieves closure not just for Perry, but for her audience as well. The Insider asked Almada and Perry to watch one another’s films and then talk to each other about making personal documentaries.

Insider: You both had a limited amount of archival material you could use in your documentaries. Was that frustrating?

Almada: It’s a different question I think I ask myself: I like having a limitation.

Almada: There’s something very interesting about absence and especially when you’re making a film about someone who’s not there, absence is what the film is about in the end. And how we live with a limited memory or a fractured memory or an absence of images. How do we either create new ones for ourselves or how do we live with the absence of what’s there? It’s not a lack of something; it’s actually a kind of content.

Perry: Absolutely. I totally agree that having restricted material is often more conducive to creativity because you have to solve problems, you have to box your way out of it, as it were. My film is very much about absence, of course, although the images of my son are all over it. You’re piecing together a portrait from a limited palette, really; you don’t necessarily have all the colors. I think in both films we’ve created a memory now by putting in a context and applying a narrative to somewhat random images. Everyone who sees El General will have an image of her great-grandfather now that they didn’t have before and people who did not know my son, [Boy Interrupted] will be their image of him, because this is all there is, and it’s been put in a storytelling form so you can digest it in under 100 minutes.

Insider: Was it always the plan that you would put yourselves in your documentaries?

Perry: I had no intention of being in my film, absolutely not. I was definitely never going to do that and that became a little bit of a problem pretty early on when it was apparent that we had everyone except for the mother in the story and I guess I knew on some level that I was going to have to be interviewed and that was an awkward situation because I’m the filmmaker as well. For me, because the basis of the film is honesty, I really couldn’t leave myself out, because that would have been short-changing the story.

Almada: I never thought I’d have a narration in the film. That was a hard thing for me to do, inserting myself that way.

Insider: How did you get over that?

Almada: I’m not sure I did. It’s more like trying to get each word out. There were parts of my grandmother’s tapes that were really hard to let go of, to edit out of the film for narration. It’s a hard process to evaluate the difference between what I think she should say and what she might have wanted to say.

Perry: I struggle with this a lot. In all honesty, I feel like my son’s right to privacy went away when he chose to kill himself. But obviously, if I was not willing to show him in his illness, then why make the film? That would just be a memorial, a mere puff piece. And one wrestles with that danger of falling into a puff piece or a biography as opposed to a portrait of the illness and the person. I didn’t want to portray him as only sick because he wasn’t like that all the time. I’m still nervous about showing it to audiences and possibly betraying his privacy, but he was pretty dramatic and I feel in a way that he would have loved this.

Insider: Do you think of the mother we see onscreen in Boy Interrupted or the person narrating El General as being yourselves or a construction of yourselves?

Perry: You can’t reduce a life to 90 minutes or reduce an experience as profound as this. What you see in the film is a grieving mother and that is me, but it’s not all of me. I’m not just that. And part of the process of making the film is providing me the ability to be more than the suicide survivor and the grieving mother, because I feel that’s very much been my whole self for these past three years.

Almada: Watching Dana’s film and my film, it’s easy to say when you’re the narrator or when you’re visibly in the film that that’s who you are in the film, but I would say more that the whole film itself is a reflection of who one is. In my case, my interactions with people on the street, or the way the film moves, or the way it’s structured, is where I am. It’s not just in the words I say in the film.