One on One: Najwa Najjar and Cherien Dabis 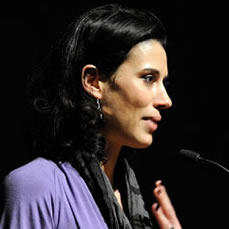 Palestinian filmmakers Najwa Najjar and Cherien Dabis met at Sundance Institute’s 2005 Middle East Screenwriters Lab in Jordan. Najjar, who is based in Ramallah, was working on her first feature project Pomegranates and Myrrh, about Kamar, a dancer whose husband is imprisoned soon after they are married because he refuses to give up his land. Dabis, who is based in Brooklyn, was also at the Lab writing a first feature, Amreeka, the story of Muna Farah, a Palestinian single mom fighting to maintain hope amidst the daily grind of life in the West Bank. When she receives a letter informing her that her family has been granted a U.S. green card, she visits her relatives in Illinois to see what life in a new land would be like. The Insider recently asked the two filmmakers to watch one another’s films and talk to one another about them. They had the following discussion, which took place over crackly phone lines due to the current bombing in Gaza.

Cherien Dabis: I loved Pomegranates and Myrrh; I was watching it and I felt like I’d seen it before. There was such familiarity, partly because I knew the script, but also because we shared some actors.

I really liked the way you portrayed the family; It’s like Kamar [Yasmine Elmasari] becomes the wife of a prisoner, and she’s really just trying to live her life despite that. And the pressure from the family to be a certain way felt so real. You really did a great job of capturing the daily frustrations and we don’t see that often enough. You’ve also done a great job telling a story of the land, of land confiscation. It’s such a powerful scene when the Israeli soldiers show up at the house, and then the scene that follows it where the family is looking through all the paperwork to prove that they’re the rightful owners. It’s so matter-of-fact.

NN: With Amreeka, I thought you captured the essence of Arab American life, as well as the gritty realism of the new immigrant’s life, but at the same time with affection and dignity; it was unbelievable. It was exactly it, as it is. And similarly the frustrations here, at home, Muna’s [Nisreen Faour] worry about her son, and then the breaking point. It was really well done.

CD: Thank you. A lot of love went into it, because it’s inspired by my family. And it’s definitely a world that I know.

NN: This was kind of your story, right?

CD: Yes. I grew up in Ohio, and we’d go back to Jordan for three months every year, so I moved back and forth all my life. And I felt like I was never American enough for Americans, and never Arab enough for the Arabs, and the question of who I was really haunted me for a long time. Where do I fit in? But I think you get to a place where you realize that you’re lucky to have these two very different perspectives.

Tell me what it was like to bring in your lead, Yasmine [Elmasri].

NN: She was born in Beirut.

CD: I know. So how were you able to bring her in to Palestine?

NN: She had a French passport. But still it was very dramatic when she arrived. We were crossing the bridge, and the Israeli soldiers came on the bus, so here it was her first time on Palestinian soil, and I said, “Yasmine, don’t cry.” I was worried that if she broke down we would be forced to go back to Amman. I couldn’t let her break down – it was very hard on me to do this to her. But despite the risks I felt she could do the role even better because she had never been to her country, because of this firstness for herself and for the film because she is a bride, coming to a new city, and I wanted her to have this experience.

For you, I wanted to ask, how was the relationship between the Canadian and Palestinian crew members?

CD: It was pretty incredible, actually. We shot in Winnipeg, Canada for rural Illinois. I wanted to find a Palestinian community in Winnipeg, but it was a challenge because it’s almost nonexistent. We found two Middle Eastern bakeries, but they were Lebanese. After some more searching, we found out about one Palestinian family originally from Ramallah – they and their relatives made up the whole community in Winnipeg! We ended up shooting in one of their homes – the idea was that this would be the most authentic and cost-effective way of creating the Palestinian home interior that we needed for the film.

And the crew in Canada was great. Overall, they just wanted to know more, and many of them wanted to come to the Palestinian part of the shoot. Production had a lot of concerns about shooting in Palestine, but to me as a Palestinian, I wanted to help create a film community there. And I wanted to spend money there, where it’s needed most. When we got there, it was such a victory for me, because all the non-Palestinians on the crew fell in love with it. So that was amazing.

I wanted to ask you a question that I get asked a lot: Who do you make movies for? Yourself or an audience?

NN: For both, I suppose. For me, making movies only for yourself could become very self-centered. And making a film only for an audience, adhering only to their needs could deplete the story of its passion, and I don’t think that works either. So a combination – a kind of dialogue between art and society – being driven to tell a story that you feel needs to be told as honestly and passionately as possible, but in a way that is accessible to audiences.