Sundance-Supported New Releases to Watch This March, from ‘Violation’ to ‘The Courier’ 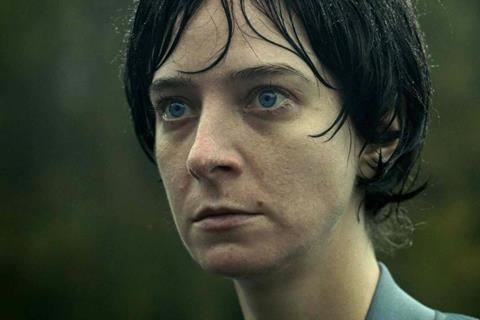 Growing up, Madeleine Sims-Fewer and Dusty Mancinelli were fascinated by iconic male anti-heroes like Taxi Driver’s Travis Bickle and Harvey Keitel’s titular character from Bad Lieutenant. “These were the films that made us want to make movies, and we realized we weren’t really seeing the same number of female antiheroes,” they explained to us before the U.S. premiere of their feminist thriller, Violation, at the 2021 Sundance Film Festival. On March 25, audiences are invited to meet Miriam, the antihero at the center of the pair’s debut feature, when it begins streaming on Shudder.

March will also see the anticipated release of the 2020 Sundance Film Festival feature The Courier (formerly known as Ironbark), directed by Dominic Cook, and starring Benedict Cumberbach, Merab Ninidze, Jessie Buckley, Rachel Brosnahan. Don’t miss it when it begins playing select theaters on March 19. We also threw in a few classic picks from Sundance Film Festival history—a quartet of must-see features that have premiered in Park City over the years and are now celebrating milestone anniversaries. Keep reading to learn more (and see where you can stream or rent them). Now, onto the titles…

Businessman Greville Wynne and prim but warm housewife Sheila lead a properly quiet English life. When rumblings of a mole in the Soviet Union government reach British intelligence agent Dickie Franks and CIA official Emily Donovan, Greville is called upon by his country precisely for his ordinariness. He is thrown into the political conflict, and as his efforts to end the Cuban Missile Crisis deepen, he forges an unbreakable bond with his informant, Oleg, that will be put to the ultimate test. Pressured by Sheila’s suspicion of his secrecy and as the Soviets close in on the plot, Greville proves himself not to be ordinary at all.

Unhappily married Miriam and Caleb join Miriam’s somewhat-estranged sister Greta and husband Dylan at a lakeside cabin for a weekend of relaxation and reconciliation. Feeling spurned in attempts to connect with both Greta and Caleb, Miriam increasingly retreats to the easy comfort of her friendship with the affable Dylan. After a transgressive act of sexual violence, the film’s narrative vividly fractures, disorienting audiences while inextricably tying their experience to Miriam’s as she embarks on a vicious crusade of revenge.

…PLUS A FEW CLASSIC STREAMING PICKS

Donna Dietch’s romantic drama won a Special Jury Prize in the Dramatic Competition at the 1986 Sundance Film Festival, where audiences and jury members alike hailed it for its nuanced portrait of two women who meet and fall in love in Reno, Nevada, in the late 1950s. The film was released in theaters 35 years ago this month, and it continues to connect with new viewers—celebrate its anniversary by renting or streaming it now.

It’s hard to believe it’s been 20 years this month since Christopher Nolan’s psychological thriller first hit theaters. The film played the 2001 Sundance Film Festival after premiering at Venice the previous fall, and it has since gone on to become a cult classic, thanks in part to Guy Pierce’s riveting performance and its intricately crafted puzzle of a script. (In fact, Christopher and Jonathan Nolan’s script was awarded the Waldo Salt Screenwriting Award in Park City the year it premiered.) Stream or rent it now to celebrate the film’s milestone anniversary.

Mario Van Peebles’ unforgettable 1991 Sundance Film Festival action crime film features an all-star cast (Wesley Snipes, Chris Rock, Ice-T, and Judd Nelson, among others), an iconic soundtrack, and an unforgettable script by Barry Michael Cooper (who would go on to scribe Sugar Hill and Above the Rim)—what’s not to love? The film hit theaters 30 years ago this month, and you can stream or rent it now.

Paris Is Burning also made a splash at the 1991 Festival, where it won a Grand Jury Prize in the Documentary Competition. Director Jennie Livingston spent several years in the late 1980s filming this vivid portrait of New York City’s ball culture and the Black and Latinx artists at the center of it, including Venus Xtravaganza, Dorian Corey, and Paris Dupree (for whom the film takes its name). Stream or rent the project—which began a theatrical run in New York City in 30 years ago this month—now.