15 Sundance-Supported New Releases to Watch in December, from “Minari” to “The Truffle Hunters” 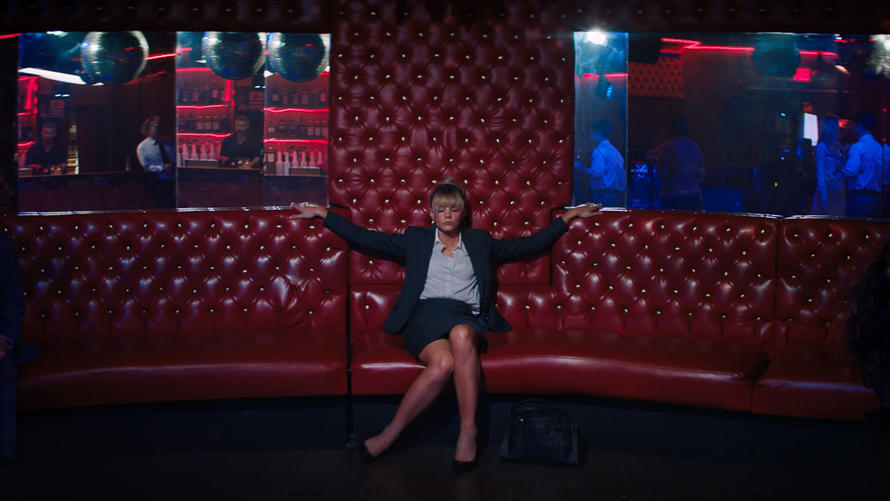 How do you like your holiday-season films? Heartwarming? Romantic? Perhaps complex and a bit disturbing? December’s giant crop of Sundance-supported new releases have all your bases covered, providing fodder for every kind of moviegoer as we wrap up 2020 and look ahead to our next crop of Festival selections.

On the heartwarming tip, keep an eye out for the opening of Lee Isaac Chung’s sweet family drama Minari, which will roll out to select theaters in L.A. and New York on December 11 before receiving a wider release in February of next year. You also can’t go wrong with The Truffle Hunters, Michael Dweck and Gregory Kershaw’s charming documentary about the old men and their animal companions who search for expensive, delicious white Alba truffles deep in the forests of Piedmont, Italy.

If it’s romance you seek, beginning December 4, you won’t want to miss Zeina Durra’s Luxor, a tale of two former lovers (played by Andrea Riseborough and Karim Saleh) who rekindle their romance after a chance encounter. Later on in the month, on December 23, Eugene Ashe’s Sylvie’s Love—a ’50s-set New York love story starring Tessa Thompson and Nnamdi Asomugha—begins streaming on Amazon’s Prime Video in all of its Technicolor glory.

And finally, prepare yourself for a pair of inventive thrillers that had their debuts in Park City earlier this year. Lawrence Michael Levine’s Black Bear, an intricate puzzle of a film, opens December 4, while Emerald Fennell’s provocative, wickedly smart Promising Young Woman—featuring a fearless performance from Carey Mulligan—makes its bow on Christmas Day.

Read on for all the details.

Mayor, a documentary by David Osit, begins playing in virtual cinemas nationwide on December 2. The project received support via a Sundance Institute Documentary Film Grant and a Nonfiction Director’s Residency in 2018.

About the Film: “Mayor follows Musa Hadid, the Christian mayor of Ramallah, during his second term in office. His immediate goals: repave the sidewalks, attract more tourism, and plan the city’s Christmas celebrations. His ultimate mission: to end the occupation of Palestine. Rich with detailed observation and humor, Mayor offers a portrait of dignity amidst the madness and absurdity of endless occupation while posing a question: how do you run a city when you don’t have a country?”

This 2020 NEXT selection by Lawrence Michael Levine stars Aubrey Plaza, Christopher Abbott, and Sarah Gadon. Catch it in select theaters and on demand beginning December 4.

From the Catalog: “At a remote lake house in the Adirondack Mountains, a couple entertains an out-of-town guest looking for inspiration in her filmmaking. The group quickly falls into a calculated game of desire, manipulation, and jealousy, unaware of how dangerously convoluted their lives will soon become in the filmmaker’s pursuit of a work of art, which blurs the boundaries between autobiography and invention.”

From the Catalog: “Teenage Aleteia has just transferred to a new high school in Compton and struggles to make friends. As a Salvadoran immigrant who has grown up in the United States, Aleteia has made underground activism her foundation for making her voice heard, but everything is thrown into jeopardy when her temporary protection status is compromised and her future becomes uncertain.”

From the Catalog: “Hana is seeking mental peace and physical respite after an overwhelming period spent working at a clinic in Ramtha, on the Jordanian-Syrian border, where she specialised in treating victims wounded in the war in Syria. She finds solace in majestic Luxor, Egypt, where she lived in her 20s and dated a handsome archeologist, Sultan, who was also studying there. On this nostalgic solo trip, she lingers through memory-filled hotel lobbies and ancient sites as she begins to grapple with her grief and her emotions from the war—but when she runs into Sultan on a ferry crossing unexpectedly, the chemistry is undeniable.”

Filmmaker Ryan White (The Case Against 8, Ask Dr. Ruth) returned to the 2020 Festival with another suspenseful, heart-wrenching exploration of a vital story of the moment. Catch the film in select theaters when it is released on December 11.

From the Catalog: “The mysterious murder of North Korean royal family member Kim Jong-nam in Malaysia sparks a captivating global investigation. At the center of the story, two women are on trial for the murder. Are the women ruthless assassins or political pawns in a twisted game? The investigation goes far beyond the headlines, probing further into each woman’s upbringing, one in rural Indonesia and one in Vietnam, and, ultimately, what led them to participate in an alleged prank show that ended with Kim Jong-nam dead.”

From the Catalog: “It’s been 17 years since Walter was forced to leave his family in Angola. Now he is picking up his wife, Esther, and daughter, Sylvia, from the airport to bring them home to his one-bedroom Brooklyn apartment. The reunion isn’t seamless. Walter cooks a welcome dinner, and Esther wonders who taught him how to cook. Before they eat, Esther says grace, revealing her thunderous new passion for Jesus. And later, Walter realizes that he has not moved on from Linda, his lover who moved out of his apartment to make way for the family. When young Sylvia starts to explore the city and takes part in a dance competition, she unexpectedly opens up a pathway of muscle memory for the family to rediscover one another.”

From the Catalog: “August Wilson, Pulitzer Prize–winning writer of Fences, The Piano Lesson, and Joe Turner’s Come and Gone, is one of America’s preeminent playwrights, chronicling the African American experience with 10 plays, each set in a different decade of the twentieth century. Now, every year, thousands of high school students from across the country gather in New York City to perform one of his monologues in a riveting, high-stakes competition on Broadway. Giving Voice closely follows the lives of six of these vibrant students as they meticulously develop their individual performances with the hopes of embodying Wilson’s legacy.”

From the Catalog: “It’s the 1980s, and David, a seven-year-old Korean American boy, is faced with new surroundings and a different way of life when his father, Jacob, moves their family from the West Coast to rural Arkansas. His mother, Monica, is aghast that they live in a mobile home in the middle of nowhere, and naughty little David and his sister are bored and aimless. When his equally mischievous grandmother arrives from Korea to live with them, her unfamiliar ways arouse David’s curiosity. Meanwhile, Jacob, hell-bent on creating a farm on untapped soil, throws their finances, his marriage, and the stability of the family into jeopardy.”

Loira Limbal’s documentary went through the 2019 Documentary Edit and Story Lab as well as the Creative Producing Documentary Lab. After premiering at the 2020 Tribeca Film Festival earlier this year, the project will open in theaters on December 11.

About the Film: “To make ends meet, Americans are working longer hours across multiple jobs. This modern reality of non-stop work has resulted in an unexpected phenomenon: the flourishing of 24-hour daycare centers. Through the Night is a vérité documentary that explores the personal cost of our modern economy through the stories of two working mothers and a childcare provider whose lives intersect at a 24-hour daycare center.”

Sienna Miller and Diego Luna star in Tara Miele’s new drama, which premiered at the 2020 Festival as part of the U.S. Dramatic Competition. Find it streaming on demand beginning December 11.

From the Catalog: “In the aftermath of a traumatic incident, Adrienne finds herself in a disorienting state of limbo, unstuck in time and witnessing life from a distance. Forced to confront her troubled relationship with her longtime partner, Matteo, and the future of their infant daughter, Adrienne must relive and renegotiate the events of the recent past—and solve the mystery of the accident. Stepping into the shadows with Matteo, Adrienne looks for clues about what went wrong between them.”

Bryan Fogel—who brought Icarus to Park City in 2017—returned to the Sundance Film Festival earlier this year to screen The Dissident in the Premieres section. The Dissident will begin playing select theaters on December 18.

From the Catalog: “Washington Post journalist Jamal Khashoggi was critical of his beloved Saudi Arabia and of Crown Prince Mohammed bin Salman’s policies. On October 2, 2018, Khashoggi entered the Saudi Arabian consulate in Istanbul and never came out. His fiancée and dissidents around the world are left to piece together clues to his brutal murder—and in their dogged quest for truth, they expose a global cover-up perpetrated by the very country he loved. With exclusive access to the Turkish government’s evidence; to Khashoggi’s fiancée, Hatice Cengiz; and to Khashoggi’s close friend and fellow Saudi insurgent, Omar Abdulaziz, Academy Award–winning filmmaker Bryan Fogel unearths hidden secrets in this real-life international thriller that will continue to rock the world long after the headlines have faded away.”

From the Catalog: “Almost 80, mischievous, caustic, and defiantly living alone, Anthony rejects each and every hired caretaker that his daughter, Anne, lovingly introduces. Anne is desperate for help. She can’t make daily visits anymore, and Anthony’s grip on reality is unraveling. Given the ebb and flow of his memory, how much of his own identity and past can he cling to? Anne grieves the loss of her father as he lives and breathes before her—but doesn’t she have the right to live her own life?”

From the Catalog: “The jazz is smooth and the air sultry in the New York summer of 1957. Sylvie helps around her father’s record store as she waits for her fiancé to return from war—until sweet saxophonist Robert walks in looking for a day job to subsidize his residency at the Blue Morocco lounge. This chance meeting kindles a deep passion in each of them unlike anything they’ve felt before. Sylvie’s mother immediately disapproves and reminds Sylvie of her engagement, while Robert’s band books their first big gig overseas. As time passes, the sexual revolution begins, and Motown becomes king, the two fall in and out of each other’s arms, but never out of love.”

From the Catalog: “Suspiciously unambitious Cassie leads a quiet existence as a barista who lives in her parents’ house since dropping out of medical school. She and her friendly boss, Gail, gab away days at the cafe. The way she spends her evenings, however, reveals a boiling vendetta. Men who cross her path are in serious danger, as beautiful and brutal Cassie seeks to heal from past trauma by doling out scathing lessons. When Ryan, a former classmate, re-enters her life, so does the possibility of healing—until new details about the death of her best friend infuriate Cassie and inspire her most potent confrontation yet.”

Michael Dweck and Gregory Kershaw’s charming documentary premiered in the World Cinema Documentary Competition at the 2020 Festival. The project will begin screening in select theaters on Christmas Day.

From the Catalog: “Deep in the forests of Northern Italy resides the prized white Alba truffle. Desired by the wealthiest patrons in the world, it remains a pungent but rarified mystery. It cannot be cultivated or found, even by the most resourceful of modern excavators. The only souls on Earth who know how to dig it up are a tiny circle of canines and their silver-haired human companions—Italian elders with walking sticks and devilish senses of humor—who only scour for the truffle at night so as not to leave any clues for others.”