Sundance-Supported Releases to Watch in October, for the Horror Fan and Otherwise 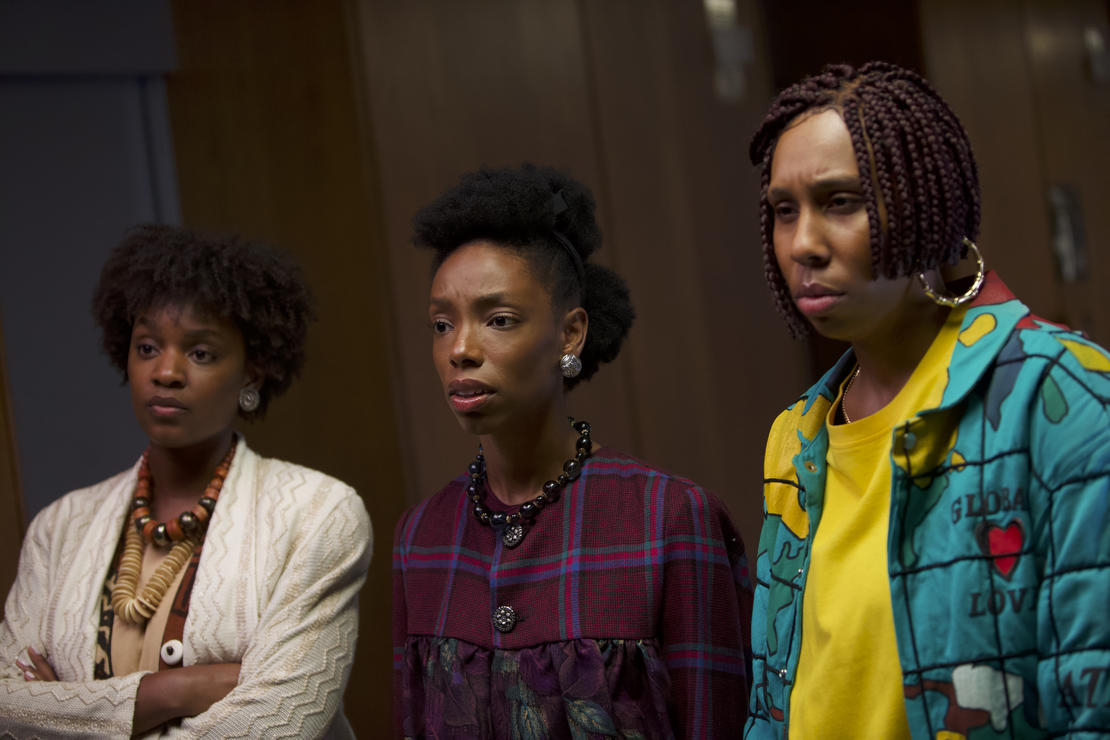 If you can use some levity in your Halloween movie nights this year, check out three picks from the 2020 Sundance Film Festival that infuse a bit of comedy into the traditional horror genre. In Justin Simien’s satirical, ’80s-set Bad Hair, a weave takes on a mind of its own as an ambitious young woman tries everything to succeed in the image-obsessed world of music television.

For more laughs than scares, watch Josh Ruben’s cabin-fire storytelling romp Scare Me, or catch Alex Huston Fischer and Eleanor Wilson’s Save Yourselves!, an apocalyptic satire in which a decidedly nonsurvivalist millennial couple face an invasion from an otherworldly force.

Switching gears to this month’s eye-opening lineup of documentaries, two films look at the deep-seated issue of incarceration. Garrett Bradley’s Time explores the human cost for one affected family, while Catherine Gund’s Aggie follows the eponymous philanthropist who used millions of dollars in sales from her art collection to create an anti-incarceration fund for large-scale change.

If you’re looking for an inspiring story, watch the chuckle-inducing, relatable pick-me-up The 40-Year-Old Version, which was supported by Sundance Institute labs and won Radha Blank the Directing Award at the 2020 Festival. Blank stars as a once-promising playwright who, wondering if she’s past her peak as she approaches a milestone birthday, aims to reinvent herself as a rapper—with all the clumsiness and self-doubt that you’d expect, wrapped in undeniable charm.

Explore the full list of new Sundance Institute–supported releases below.

During a power outage, two strangers tell scary stories. The more Fred and Fanny commit to their tales, the more the stories come to life in the dark of a Catskills cabin. The horrors of reality manifest when Fred confronts his ultimate fear: Fanny may be the better storyteller.

With this inventive portrait, a cameraperson seeks a way to keep her 86-year-old father alive forever. Utilizing moviemaking magic and her family’s dark humor, she celebrates Dr. Dick Johnson’s last years by staging fantasies of death and beyond. Together, they confront the great inevitability awaiting us all.

In this sci-fi thriller, elite corporate assassin Tasya Vos uses brain-implant technology to take control of other people’s bodies and execute high-profile targets. As she sinks deeper into her latest assignment, Vos becomes trapped inside a mind that threatens to obliterate her.

Save Yourselves! (Theatrical 10/2, VOD 10/6)
Directed by Alex Huston Fischer and Eleanor Wilson

A young Brooklyn couple heads upstate to disconnect from their phones and reconnect with themselves. Cut off from their devices, they miss the news that the planet is under attack.

An exploration of the nexus of art, race, and justice through the story of art collector and philanthropist Agnes Gund, who sold Roy Lichtenstein’s painting Masterpiece in 2017 for $165 million to start the Art for Justice Fund to end mass incarceration.

Mouse desperately wants to join the Midnight Clique, the infamous Baltimore dirt-bike riders who rule the summertime streets. When Midnight’s leader, Blax, takes 14-year-old Mouse under his wing, Mouse soon finds himself torn between the straight and narrow and a road filled with fast money and violence.

Radha is a down-on-her-luck New York playwright who is desperate for a breakthrough before 40. Reinventing herself as rapper RadhaMUSPrime, she vacillates between the worlds of hip hop and theater in order to find her true voice.

Fox Rich is a fighter. The entrepreneur, abolitionist and mother of six boys has spent the last two decades campaigning for the release of her husband, Rob G. Rich, who is serving a 60-year sentence for a robbery they both committed in the early 90s in a moment of desperation.

In this horror satire set in 1989, Bad Hair follows an ambitious young woman who gets a weave in order to succeed in the image-obsessed world of music television. However, her flourishing career comes at a great cost when she realizes that her new hair may have a mind of its own.

After making a harrowing escape from war-torn South Sudan, a young refugee couple struggle to adjust to their new life in a small English town that has an unspeakable evil lurking beneath the surface.

What Else We’re Watching

Thank You and Good Night, 1991 (Criterion)
Directed by Jan Oxenberg

Blurring the line between fiction and fantasy, Jan Oxenberg follows her hilarious, messy, Jewish family in the wake of a loss through the highs and lows with absurdist humor and stream-of-consciousness reflection. Newly restored after almost three decades since its premiere at the 1991 Sundance Film Festival, the poignant film is now streaming on the Criterion Channel, along with a new introduction by the director as well as two of her rarely screened shorts: Home Movie (1973) and A Comedy in Six Unnatural Acts (1975).