‘Spree’ Director on the Link between Attention Culture and Violence 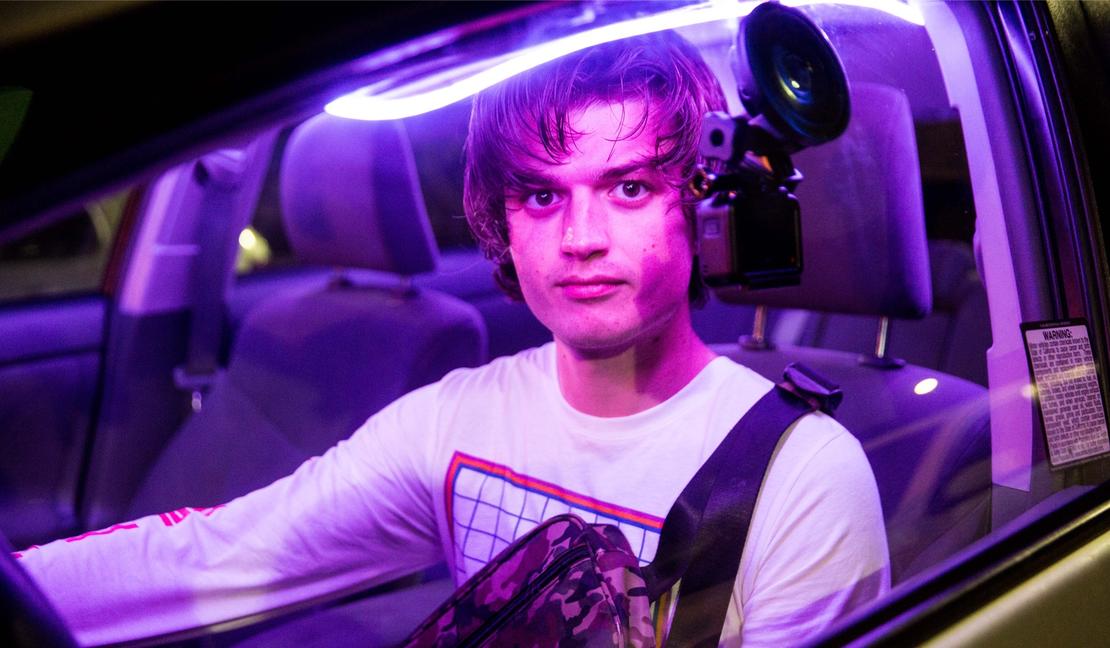 Eugene Kotlyarenko’s thriller Spree is now streaming after its premiere at the 2020 Sundance Film Festival. Equal parts horror and satire, the film plays out almost entirely through the device screens of its main character and villain, rideshare driver and wannabe influencer Kurt (Joe Keery). Desperate for the validation of strangers, Kurt turns his unsuccessful social media account into a livestream of deadly attacks on his passengers, which only gets more twisted as he amasses more followers.

Apart from pulling off an innovative thriller—co-starring SNL alum Sasheer Zamata and David Arquette—Kotlyarenko also hopes the film might help audiences view social media and our attention-seeking culture a little differently. We caught up with him to discuss the film’s release and the impact he hopes it will have.

Director Eugene Kotlyarenko at the premiere of ‘Spree’ at the 2020 Sundance Film Festival. © 2020 Sundance Institute | Photo by Caydie McCumber

I imagine that as you did research for the film, you went into some disturbing corners of the internet. Did anything surprise you about that world or change the way you thought about that realm?

I’ve been speaking about violence in America and the trend of white male mass murderers for a while. We as a country have attempted to grapple with it in different ways. Our former president made impassioned pleas about gun control and mental health, and that was met with lackluster reaction. And you look at journalists and they try to psychoanalyze or socioeconomically analyze the rationale behind these horrific acts, and at a certain point it just became really obvious to me that the people who were doing this by and large, beyond having mental health issues, were desperately seeking attention. They wanted to feel like the center of a narrative. …

And so it wasn’t very far of a leap to look for people who are wannabe influencers, who are on the fringes of a very normal internet, but that becomes inherently dark when you see people posting hundreds and hundreds of posts that are getting almost no interaction, no views, and they’re spinning their wheels trying to emulate the influencers that they look up to but without any sort of a personal brand or content that’s ever going to break through. And I found that to be really depressing but scary too. So I conflated these two trends in our culture: people who are desperately looking for attention and the scariest place that could go.

Tell me more about that darker side of influencers.

For every influencer you’ve heard of, there’s literally 10,000 people trying to do the exact same thing, trying to review products, do unboxing, try to show off an opulent lifestyle, and no one cares. They all present in this very scripted way; they think they’re being natural but they’re actually just mimicking the words and codes and rituals that they’ve seen before from people who do this successfully, for better or worse. And that sort of fake naturalism that is super transparent is scary. We align ourselves with our virtual identity so strongly, and then you just see people who aren’t even being real, they’re just emulating stuff for attention or financial gain. It’s a real disturbing trend in how we understand our society and ourselves.

Kurt is a crazed killer, but was there any intention of making audiences relate to him at all?

I want them to reflect on themselves. Kurt is monstrous, he is the villain of the film, what he’s doing is horrifying, so it takes it to a place of horror, but the film is also a satire, so Kurt is the vehicle to satirize the culture that we’ve all bought in to. So I hope that by the end of the film, people are able to reflect on their own relationship with social media, their own desperate desire for attention, their own complicitness in a sensational attention economy. I think Joe in his performance is able to really tease out the sadness and pathos of that sort of character. Obviously he makes it scary and cringey, which is what I was going for on the script level, but beyond that he was able to find the pathos that serves as a mirror for people to reflect and see a bit of Kurt in themselves, which is the scariest thing of all.

You touched on the complicity that we all have in our general culture. In the film, there are fringe characters who are complicit in the violence—do you also see the audience as sensing their own complicity?

The history of cinema is about the history of voyeurism and impotence in the face of suspense. So that is inherently built into a movie but also built into a livestream. You are a passenger in this car, a viewer of this stream, and I just thought that would be such a perfect landscape for a horror, where you lose your agency and you’re just stuck. So the first act of the movie is pure claustrophobia in the car with Kurt as you discover the horrible stuff he’s doing, and then as his audience grows, you have these comments that appear on screen, which are a different type of surrogate for the audience. They see themselves on the viewership that’s commenting and making fun of him and telling him to go on.

It’s sometimes unclear whether those viewers think the rampage is fake or if they think it’s real and are still egging him on. Do you think there are a lot of people out there that are dark enough to do something like that?

I don’t think people are inherently bad, but I do think that the framework for virtualizing our communication tends toward detachment. If you have a physical distance but a virtual closeness, and then you’re anonymous, that allows you for all sorts of immoral behavior, because we want to be satiated. Our desire for sensationalism and conflict can be satiated without any repercussions because we’re not there, we’re just viewing it. We find agency in encouraging the worst possible things to happen. … And the scariest end game of all of this is people engaging in violence for love.

Your film makes use of the screen life format, where we see everything through a device that is part of the story. What is it about that format that draws you to it?

For me it’s not even about just screen life; it’s the potential that cinema has to expand its language, just like in every era of cinema, whether it’s moving from silent to sound, Academy ratio to widescreen, or black and white to color. It’s these sorts of formal and technological changes to how general audiences experience screens and media that I want to explore and innovate with so that we can tell stories in a way that feels relevant and exciting and new. And I do think audiences want that, and I think they’re open to the language of cinema being exploded and explored in new ways.

What effect do you hope this project will have on people’s social media use or other behavior?

We’re promoting the film right now through an in-character Instagram account, @kurtsworld96, and I want to make sure that that account and the impact that it had on all the followers of the account is really similar to the message of the film, which is Please reexamine your relationship with social media. There’s a lot of engagement going on with that account, and there are kids who are interacting with that account who will be more impacted by that account than by the film, so obviously we have a lot of responsibility when we have a platform.

Obviously in the last few months especially, social media has been used for social justice, and I think that’s a really good turn for social media, but I also think that in time these mediums are built around attention, and we have been trained that attention can be gotten through salaciousness and violence and negativity. … I think everyone should be very thoughtful about how we approach social media because we’re only now really understanding the ramifications of the way it affects our self-worth and our identity and our morality and our goals as a society.

I hope that when people watch this film, they’ll find it funny and scary and entertaining, and then step away from it and have something to talk about and think about and reflect on in our very unique troubling times.