Release Rundown: What to Watch in October, from ‘Mayday’ to ‘Passing’ 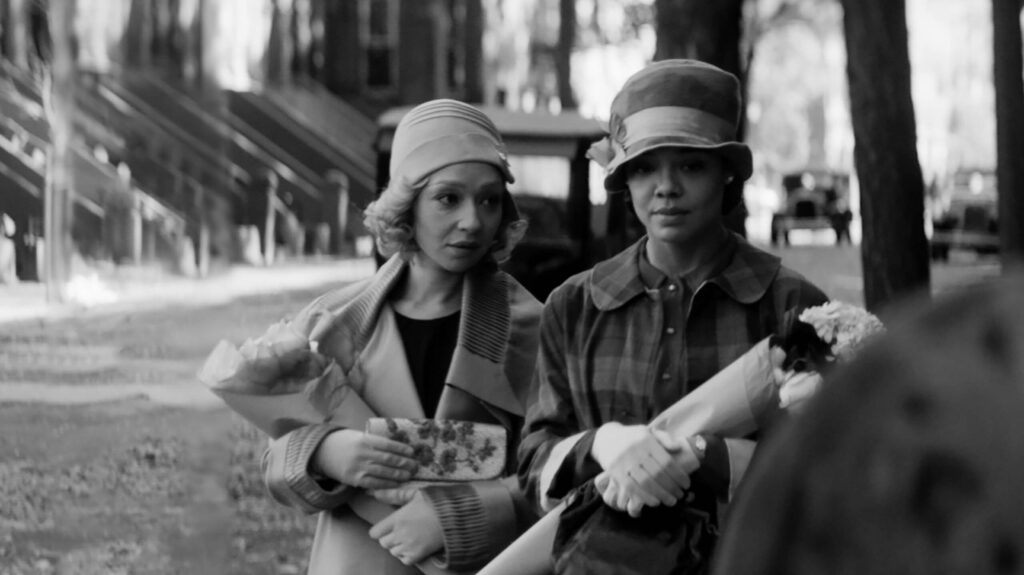 Five 2021 Sundance Film Festival alums released to wide audiences in October attest to the variety of independent cinema created in our times. A fantasy, a thriller, a fantasy thriller, a Harlem Renaissance–set period film, and a drama imagined in the distant aftermath of a mass shooting are among the films opening in theaters and/or on streaming services this month.

Perhaps the most unfathomable of these is the latter, Mass, which focuses on an event ripped from modern-day headlines — a tragic school shooting — without blasting images of gunfire and spattering blood across the landscape. We do see the pain — we’ll never escape that — etched on the faces of the parents of one who died that day and the parents of the one who was the shooter. Most of the film takes place in a single room where the parents (Jason Isaacs, Martha Plimpton, Ann Dowd, and Reed Birney) agree to meet several years removed from the violence.

The film was written and directed by actor Fran Kranz in his feature debut. “Kranz has made a quiet, contemplative film on a subject of ongoing national urgency,” wrote David Rooney in The Hollywood Reporter. “Mass is most notable for its refusal to indulge in breast-beating theatrics, instead favoring psychological complexity and human connection as it tests the boundaries of forgiveness and understanding.”

In addition to Mass, October releases include the revenge fantasy film Mayday, the New Zealand thriller Coming Home in the Dark, the fantasy horror entry The Blazing World, and Passing, a drama based on Nella Larsen’s 1929 novel about a light-skinned Black woman who passes as white in 1920s New York.

Inexplicably transported to a rocky coastal land where young women fight an all-consuming war against men — luring them to their deaths with a mayday signal, much like the mythological sirens called men to die on the rocks — Ana (Grace Van Patten) finds she doesn’t quite fit in. But was her old life any better? “Unafraid of pushing cinematic boundaries, writer-director Karen Cinorre stylishly blurs genres and draws us into the unique realm of her remarkable debut, where possibilities multiply and women take control of their own destinies,” wrote a Sundance programmer. Mia Goth also stars. Magnolia Pictures releases the film in theaters and on demand October 1.

COMING HOME IN THE DARK

A family’s road trip through the New Zealand countryside takes a violent turn when two mysterious men crash their picnic. The drifters’ intentions — and motivations — unspool over the tense, suspenseful course of the film, much of the action taking place inside the car. Daniel Gillies, Matthias Luafutu, Miriama McDowell, and Erik Thomson star. James Ashcroft’s film receives limited theatrical release and availability on video on demand October 1.

One student came to school with guns and explosives. Another student died that day. Now, years later, their parents are coming to a sterile community room in a church to talk this out. Two couples, four individuals, each looking for forgiveness, if only in their own hearts. Starring Jason Isaacs, Martha Plimpton, Ann Dowd and Reed Birney, it is powerful and heartbreaking, but viewers find it surprisingly cathartic as well. Fran Kranz’s directing and screenwriting debut opens theatrically October 8.

Haunted since she was 6 years old by the memory of watching her twin sister drown, Margaret falls into a troubled, self-destructive life marked by thoughts of suicide. Returning to the family home, she is drawn into an alternate reality where her sister may be alive. Texan filmmaker Carlson Young co-wrote and directed the film, as well as playing the lead role. The Blazing World opens in select theaters and is available on video on demand on October 15.

Irene (Tessa Thompson) and Clare (Ruth Negga) are mixed-race women who went to high school together. They run into each other years later in a New York City tearoom, and Clare initiates a friendship. Clare is married to a white man and lives the life of a white woman. Irene is married to a Black doctor and lives on that side of the color line. Based on the famous 1929 Harlem Renaissance novel by Nella Larsen, the film is a study of racial identity. Shot in elegant black and white, Rebecca Hall’s debut feature is scheduled for limited theatrical release October 27, followed by streaming on Netflix beginning November 10.