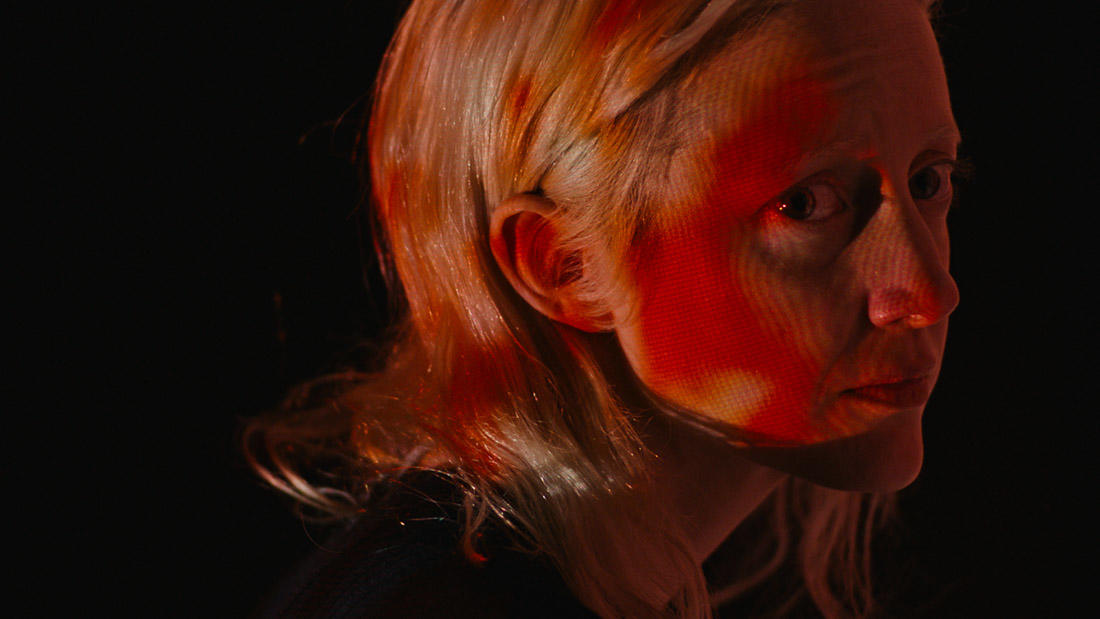 Back in January — before we all started stocking up on hand sanitizer, customizing reusable face masks, and becoming intimately acquainted with the many intricacies of Zoom — Brandon Cronenberg arrived in Park City for his first-ever Sundance Film Festival, where he was set to premiere his second-ever feature, Possessor.

Featuring a trio of deeply unsettling performances by Andrea Riseborough, Christopher Abbott, and Jennifer Jason Leigh, the film, retitled Possessor Uncut for its limited theatrical U.S. release this month, hits on the terrifying notion that as humans, some of us just might have a bit of difficulty separating our work lives from our personal lives — while others of us might be a little too good at it.

In the film, Riseborough plays a skilled but unraveling assassin named Tasya Vos who performs her job remotely, “cleanly” carrying out her missions before ending the lives of the corporeal hosts she’s inhabiting. Jason Leigh plays her mysterious boss at an unnamed Toronto corporation, and Abbott takes on the role of an at first-unwitting possessee who begins to fight back as Vos’s anxieties about her personal life begin to bleed into her professional life, and vice versa.

As the Toronto native — son of horror auteur David Cronenberg — recounted when we recently caught up with him over Zoom, it’s a story that’s been bouncing around in his head since 2012, when he was doing press for his debut feature, Antiviral, an equally stylish and shiver-inducing sci-fi horror film that premiered at Cannes. Keep reading to find out more about how the face-melting, mind-bending project came together and what it was like premiering the project at the 2020 Festival.

Tasya Vos (Andrea Riseborough) on the job in ‘Possessor.’

I understand you were working on Possessor while doing press for Antiviral, and that the script ended up being so long you had to cut it into two films. Can you talk about that process?

So yes, the initial idea came to me while I was doing press for Antiviral, my first film. It’s very strange traveling with a film for the first time, because you are really inventing this public persona and performing this new version of yourself — this media self — which then goes off and has its own life without you. So in between that and a few other things, I was finding that I sort of couldn’t see myself in my own life.

In a sense, I felt like I was sitting up in the morning and feeling like I was sitting up in someone else’s life and having to scramble to construct a character who could operate in that context. … The sci-fi/thriller elements kind of grew out of that, but the seed of the film was really in those dramatic scenes — the relationship scenes and the family scenes.

Do you see yourself making something out of the material that you cut out of this film?

I think so. It’s not a finished script exactly, or it’s not a polished script yet, and I have two other scripts that I wrote in the time when I was developing Possessor that are closer to going, but it is definitely something that I want to revisit.

You’d been working on the film for about eight years before it premiered at Sundance, it sounds like. What were the biggest challenges that came about in getting the film made?

I think it really came down to two things: First, I was essentially starting from scratch after Antiviral, because it was my first film. I didn’t have a career as a filmmaker back then, so I didn’t have multiple films in development; I was putting all my effort into just getting that one made. So then when we finished, I had to start a new script and develop it and get people interested in it and so on.

After that, it was just the usual problems with indie film development — it’s sometimes hard to get financing; it takes time. We went down the wrong path with the wrong financier for a little while, and then we had to come back. It was really that — there are always people giving you feedback (laughs) on your scripts, and everybody has their own ideas. Some you like, and some of them you don’t like, but that’s just the usual process. There wasn’t anything in the script that I was forced to cut, ultimately.

What it was like premiering the film at Sundance in January, and what has your journey with the film been like since then, with everything going on in the world?

It was really exciting to have the film at Sundance. I had never been to Sundance, actually, even as a festivalgoer, so to be able to show the film there and to get a warm response from the audience was really great. It was also very lucky because Sundance was sort of the last Festival in the world, or the last major Festival, to operate in any sort of normal capacity. Since then, obviously a lot has changed, but from the perspective of releasing the film, I’d say the strangest thing is just that I’m doing this over Zoom rather than going around and being in various hotel rooms doing press junkets in person.

Definitely. On that note, early on in the film, we see Vos struggle with the effects of bringing her work home with her — something that seems especially resonant now that so many of us are working from home offices and having more trouble setting boundaries. Can you talk a bit about that compartmentalization and how it begins to break down for the character?

Certainly. I think with Vos, there are two ways to look at her character. One is a sort of broad view of the character, which I feel is sort of universal where whether it’s our work or just who we are, there’s usually some kind of disconnect — and at times an extreme disconnect — between our interior sense of self, who we think we are in the sense of the character we build for our own self image and then who we are in the context of civilized life.

It’s especially strange I think because we’re apes — we’re animals — and yet in the context of very civilized domestic existence, there’s a certain rule set. Civilized society versus our interior ape self maybe causes some sort of general conflict for people.

More specifically to Vos, I think that issue is pronounced because of the type of work that she does and her own relationship with violence. On some level I think I was imagining her as a drone pilot who experiences PTSD. There are these drone pilots who despite not being physically at war are traumatized by the acts of violence that they’re involved in and take that home with them.

There’s also an element of her character that I think she could relate to which is that Vos is sort of like an actor and is sort of traveling around playing other people and then inhabiting all of these characters in a very thorough way and then having to come home and play herself.

What is it about the character’s personality that is so drawn to the work that she does, even as it threatens to destroy her life outside of it?

I wanted to ride the line with her between on the one hand having that relationship with violence be an inherent part of her, at the core of who she is, and so she has this violence in her that is at odds with civilized life and is pursuing this work because of it. And on the other hand this is something within her that’s being nurtured by this mentor figure, so we don’t completely know whether it’s just something she wants that was in her from the start or if that in and of itself is a kind of manipulation by the corporation to push her to shut out her life and to embrace this kind of lowly violent assassin existence.

There’s a lot of truly disturbing imagery in the film, but I think the part I found most disturbing was the sheer, visceral horror of literally being in someone else’s skin. Both Andrea Riseborough and Christopher Abbott do such a convincing job at communicating that sense of fundamental unease throughout the film — something that a lot of body-swap comedies will shallowly mine for laughs and quickly drop. Can you talk a bit about those performances and how they meshed together in such an unsettling way?

It was kind of, from my perspective at least, a fairly organic process. Early on, I was a bit concerned about how we would approach it and was trying to find a sort of formal process; we talked earlier in development about how we would go about it. Did they want to be on set watching each other play scenes, or would they pick one of them to sort of take the lead and then the other one would follow, or how would that work? It was a bit of a rabbit hole early on that we could go down, trying to find the right way to do it.

In practice, and I’m sure this speaks in part to just how wonderful Chris and Andrea are as actors, and how easy they made my job, it was very organic. I had certain thoughts initially about how the characters would overlap; they had their own thoughts that we discussed and integrated. I understand that they discussed behind the scenes quite a bit with each other, checking in to see how Vos would behave under certain circumstances, and of course on set as we were shooting, we talked, so the whole thing was kind of built out organically as we went in a collaborative way.

Ed. note: This conversation has been edited and condensed for clarity.