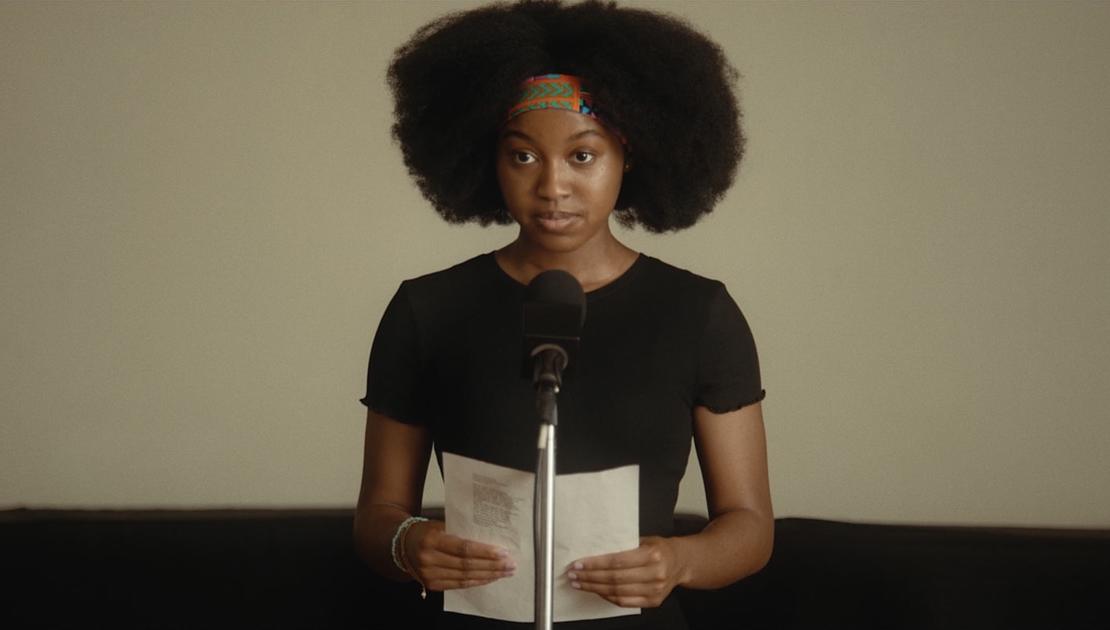 Peoples’s film highlights the community, beauty, and complexity surrounding Juneteenth, an Independence Day for Black Americans. Below, read about Miss Juneteenth and Peoples’s storytelling process. To learn more on the history and the significance of Juneteenth, check out Penguin Random House’s Juneteenth reading list. To support organizations that support the Black community, consider donating today to one of the following mutual aids.

After premiering at the 2020 Sundance Film Festival, Channing Godfrey Peoples’s debut feature is hitting digital platforms this Juneteenth — the day for which the film is named and which is very close to the director’s heart. “I feel like I’ve been living Miss Juneteenth my whole life,” she says.

The June 19 holiday — which commemorates the day slavery was finally abolished in Texas (more than two years after the 1863 Emancipation Proclamation was issued) — is celebrated in her hometown of Fort Worth with a deep sense of reverence and community, with barbecues, a parade, and a scholarship pageant for young Black women.

These pageants made a lasting impression on Peoples from a young age. “I saw these beautiful young African American women on stage that looked like me,” she says. “I saw them in their beauty, in their intelligence, in their talent — and what struck me the most was that they were hopeful. … I always wondered what happened to those women.”

Miss Juneteenth centers around Turquoise (Nicole Beharie), a former pageant queen and now single mom who struggles to make ends meet. As she works toward a better life, she pours renewed hopes into her daughter Kai’s chance at becoming the next pageant winner, and eventually Turquoise rekindles her own deferred dreams in a new way.

This beautifully nuanced, delicate story was supported through Sundance Institute’s Screenwriting Intensive, Creative Producing Program, and Women’s Financing Intensive before premiering at the Festival. We connected with Peoples ahead of the film’s release for her thoughts on the journey of this debut feature and the importance of amplifying Black stories.

<p “=””>Sundance: At the center of this film is a mother-daughter relationship. Was that inspired at all by your own life?

<p “=””>Peoples: I had this really tough-love version of Turquoise on paper, because I wrote it from the perspective of being a daughter. But we [got financing] right around the time I found out I was pregnant. And after having my daughter, it changed my perspective a bit about having hopes and dreams for another human being and wanting to protect them no matter what. And so it changed my direction in the sense that I was now looking for the joy as well. I thought, no matter what we do, we have to find the joy in Turquoise’s love for Kai.

Juneteenth is not just a backdrop for the story; you draw a parallel between the history of the holiday and the journey of the main character. Can you share your thought process on that?

Commemorating Juneteenth is about our ancestors who were slaves in Texas finally getting their freedom two and a half years after everyone else, and I wanted to portray that in Turquoise’s journey in finding her own sense of freedom by coming to terms with the past even though she finds it later in life. … Her dreams were rerouted, but they end up being reshaped into a new dream.

It’s interesting because [the enslaved people] were told they were free and there was a sense of “What’s next for us? What does freedom mean?” Turquoise is also navigating the “what’s next” in her life — not only for herself but for her daughter. The Miss Juneteenth pageant is something she sees as vital in her life. She’s holding on to it with both her hands because it’s a chance for her daughter to have a sense of what Turquoise perceives as freedom in this society that is not a place that can be supportive of young Black women.

You and your cast members have talked about how this story and its characters are both ordinary and extraordinary at the same time. What does that mean to you?

I see the beauty in these stories of ordinary folks. They’re extraordinary to me because they’re the people that I grew up with. They’re who have affirmed me and lifted me up and supported me and been pivotal in me being able to have the freedom to become a filmmaker. Because I see the beauty in the community I grew up in and these Black stories, those are the stories that I want to tell and I feel like haven’t been seen very much and should be told.

Speaking of inspiration, what other filmmakers or artists have inspired you?

I also love My Brother’s Wedding from Charles Burnett because it’s another story that’s about the ordinary becoming extraordinary. I love Julie Dash’s Daughters of the Dust, which was formative for me.

<p “=””>A big part of my cinematic education started in the literary world because there wasn’t a big infrastructure for young Black women in Texas for cinema. So I really started with community theatre and books. I love Toni Morrison, Alice Walker, Gloria Naylor, and Maya Angelou— all these writers whose work is so visual. I was also inspired by photography — I really love Gordon Parks’s Segregation series.

Another formative film for me was Steven Spielberg and Alice Walker’s The Color Purple. I loved Kasi Lemmons’s Eve’s Bayou, Jonathan Demme’s Rachel Getting Married, Richard Linklater’s Boyhood, and Gina Prince-Bythewood’s Love and Basketball. I could go on and on but I think one thing that all these films have in common is they take you to a specific place and let you live in the characters and in the world. They have a specificity and a lived-in, intimate feel that I would love to be able to translate to my films.

Can you share one of your biggest takeaways from this experience of making your first feature film?

When you start to conceive a story, there’s a kernel of it that makes you really want to tell the story. And I think it’s important that you hold on to that kernel no matter what, because for me as a first-time feature filmmaker, though I’ve been immersed in the film world for a while, there are a million decisions to make. And I think all those decisions have to come back to the deciding factor of “What is the reason that I wanted to tell this story? Why is it important to me?” I think that’s what I’ll continue to take with me. I want to hold on to the reason that I’m telling this story and let that be the guide.

This project received support through the Sundance Institute Creative Producing program and other organizations. How did that support shape your film?

With the kind of story that we were telling, I was grateful that it went through the Institute because I feel like we were protected in a way. We’re telling a story that’s radical in its own way because it’s about a Black woman with a dream deferred that just knows she wants something for herself, and it doesn’t seem like it should be radical but that’s a radical story to tell because we don’t see many of them.

I was also telling a more nuanced, sensitive, and delicate story, and that was protected by going through different development programs including the Institute, and I also felt affirmed in being able to tell the story in the way I wanted to tell it. Part of it is I’m just stubborn [laughs] and I’m going to do it my way, but I also feel like I had support to do that. The Institute guided us through many pitfalls, and they were there to offer ideas or watch or listen or advise, so they were very important for us.

What do you hope audiences feel while watching this film? Have your goals for the project changed since it premiered, particularly in the context of our nation’s current reckoning with its systemic racism?

I mean, we hope that there’s a reckoning. My goals haven’t changed in the sense that I feel a responsibility to tell our stories no matter what; that’s what made me excited about telling this story in the first place. I love Black people obviously and that translates to my work. Do I feel a sense of urgency to continue to tell stories? Absolutely. It’s a bittersweet time for the film to be coming out right now because there is a sadness at these tragedies that have happened and are happening in the world right now. But I also feel like it is absolutely important right now to have stories in existence about the humanity of Black people.

Black people are still navigating whether we have the right to exist. … It’s important right now that [we] put at the forefront the humanity of Black people. And that’s sad that that is even a debate, but it’s important.

We’re literally 155 years after the last slaves were told they were free in this country and Black people are still navigating whether we have the right to exist— the freedom to breathe, the freedom to not be slain in the streets. It’s difficult but at the same time it has made me more determined, especially when I look at my daughter. What I want for her is to be in a world where she has equity and where she’s not in fear for her life. I think it’s important right now that we amplify Black stories and we are able to put at the forefront the humanity of Black people. And that’s sad that that is even a debate, but it’s important.

How are you celebrating Juneteenth this year? It must be very different this year not only because of your film release but also in the current climate of racial justice, as well as the effects of COVID-19.

One of the interesting things about this community is it feels lived in, like everything feels past its expiration date. We live in the big city of Fort Worth but we filmed on the historic south side of Fort Worth, and it’s an African American community that feels like a little town because you know everybody. I wanted every aspect of the film to feel like that because it’s what I feel when I go into the community; I feel like I’m back home. Things have changed but they remain the same. It’s where I go every year to celebrate Juneteenth, and the sadness is that I’m not going to see my folks this year.

Folks are watching the film online and organizing their own watch parties and things like that, so I’m going to stay as close as possible to trying to have a connection. My little family and I will have our own commemoration for Juneteenth because I think it’s so important for us to commemorate our ancestors yearly who suffered through slavery and got their freedom later [gets emotional]. There is a sense of loss over not being able to connect over something that is so vital to the community and us connecting, and we have such a sense of respect and reverence for those people who got their freedom late. …

All in all, I’m excited about the film coming out. It’s a bittersweet time but I hope that the film will create some hope for folks at a time like this.