NEXT FEST: The Zellner Bros. Help Unearth Mysteries of Kumiko, the Treasure Hunter 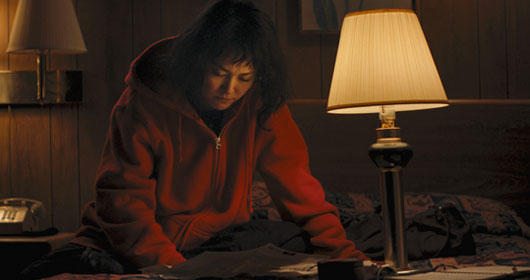 Kumiko, The Treasure Hunter will screen at the Theatre at Ace Hotel Downtown Los Angeles on Saturday, August 9, as part of Sundance NEXT FEST. Following the screening, the Zellner Brothers will be joined by a special guest for a lively conversation and Q&A. Click here to purchase tickets.

To this day, David and Nathan Zellner talk about epic odysseys and unexplored lands in a wistful tenor. It’s as if they lament losing their curiosity to GPS devices and Google Maps.

“There’s no real mystery left with the world anymore,” says Nathan Zellner. “Everything is mapped out.” So when the Sundance vets and filmmaking brothers came across a 2001 news story describing a Japanese woman on an intercontinental expedition to uncover a treasure in Minnesota, something sparked. “We started thinking about what would have led to that point and then that evolved into the script,” explains Nathan Zellner.

More than a decade later, the Zellners have fashioned the utter obscurity and mythical nature of that story into a U.S. Dramatic Competition selection at the 2014 Festival. Kumiko, the Treasure Hunter follows a young woman (Rinko Kikuchi) who ditches the austerity of Japanese work life and treks to Minnesota to discover the buried loot from the film Fargo. It’s a fascinating confluence of culture and era, forming into something of an ode to classic adventure tales while maintaining an impressive degree of cinematic and narrative expertise. Kumiko does its best work in the liminal spaces, where the Zellners are adept at giving the viewer just enough to chew on so that they’ll stick around. It is, on one hand, bashful storytelling, but more notably, a clever tactic that invites the imagination to take part in building the narrative.

Below, the co-writing duo talk about the origins of their script, writing roles for themselves to act in, and an unrelenting nostalgia for the age of exploration.

There’s a peculiar backstory to the conception of this film. Can you share how the story came about?

Nathan Zellner: There’s a story that came out in 2001 about this woman going from Japan to Minnesota on this search for a treasure, and there was no other information initially beyond that. It was so mysterious and fascinating to us, and we wanted more info than what was available. We started thinking about what would have led to that point and then that evolved into the script. As time went by, more details of the story came out, but we liked the urban legend and the way it took a life of its own and we did our version of that for the script.

We also thought that someone going on this treasure hunt across the globe kind of seemed like this antiquated thing or something that people did centuries ago in the age of exploration—going to foreign lands for physical fortunes. We liked applying that idea and logic to this setting.

Where did you discover that story?

David Zellner: This was before the days of Twitter, so it was just online somewhere when we were talking about it. The initial thing was that this woman was found in Minnesota looking for this treasure. That was the impetus for us to do something with it.

As a viewer, you don’t’ really know Kumiko’s story and how she arrived at this place in her life. Was the intention to allow the viewer to fill in those blanks?

David: We wanted it to be developed enough for the audience to be engaged with the character and want to go along with her on her journey, but at the same time we didn’t want to spell out every detail. There is a sense of mystery to her, but she’s developed enough for people to want to follow her on this journey.

What was the process for casting Rinko Kikuchi, who plays Kumiko?

Nathan: With Rinko, we had seen her in Babel, and she was so great in that. We had seen her in some other films as well—this Japanese film called Funky Forest, which we like a lot. Kumiko is a really challenging role both emotionally and physically, and we needed someone who would go all the way with that. At the same time, [we tried to] maintain this sense of control and subtlety that we wanted for the performance and the film tonally. We met with her several years ago and she got what we were going for with the film. It was pretty much as simple as that as far as knowing that she was perfect for the role.

You both appear in the film. In writing those characters, do you have yourselves in mind for the roles?

Nathan: We’ve always acted in our films when appropriate. I think if this was the first time or something we would be nervous about it, but it’s something we’ve done all along. It’s just kind of second nature to us. It was on our minds when we were writing, but it depends on the project. We like to do it, but we know our limitations.

There’s this contrast the develops between Kumiko’s austere existence in Japan and the nurturing that she receives when she gets to America. How intentional was that disparity?

David: It wasn’t a conscious decision in that way, it was what was appropriate for the story. There are a lot of contrasts that were built into these environments inherently because they are so different. We’re very particular about what we show and didn’t show, and there is obviously a stylization involved. But a lot of it unfolded on its own based on this dynamic that we set up in the beginning.

It has the sensibility of an epic odyssey, and Kumiko even refers to herself as a “Spanish Conquistador,” almost to the point of delusion or disconnectedness.

Nathan: Whether it’s a good idea or not, we liked this idea that she’s on this passion drive quest. We grew up being very interested in explorers and conquistadors and that kind of thing so it was easy for us to draw this parallel of this girl crossing the globe, going to America, and looking for this mythical fortune. Maybe that was self-imposed on our part, but we really liked the idea of applying it to this contemporary setting with a Japanese woman going to America. There’s no real mystery left with the world anymore, everything is mapped out. There are no mysterious foreign lands that are unexplored, so we liked the notion of someone approaching that sort of logic in this modern setting.