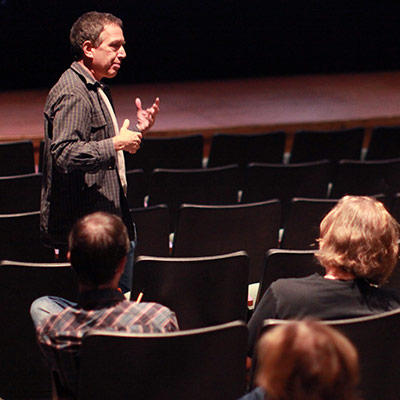 March 11, 2014 (Beverly Hills, CA) — The Wallis Annenberg Center for the Performing Arts and Sundance Institute are collaborating to present two events exploring the role of music in film: ComposersLab: LA On Stage with world-renowned composer Harry Gregson-Williams on Sunday, March 30 at 2:00pm; and ComposersLab: LA on Saturday, April 12 for composers working in film and television. Both programs will provide an intimate, behind-the-scenes look into the creative process of a film composer.

ComposersLab: LA On Stage – March 30
Peter Golub, Director of the Sundance Institute Film Music Program will lead a conversation with Gregson-Williams, one of the most successful and exciting film composers working today and the talent behind the film scores of the Shrek series, The Chronicles of Narnia, Kingdom of Heaven, Man on Fire, and Spy Game, among many others. The discussion will shed some insight into Gregson-Williams’ creative techniques, including a live demonstration of his work, with special guests Hugh Marsh and Martin Tillman.

Also at the event, a select group of Sundance Institute’s Composer Fellows will show their own scored version of a scene from an established film, offering the audience a unique chance to discover, firsthand, how music shapes and enhances the identity of a film and the experience of the viewer. In addition, directors Zal Batmanglij (The East, Sound of My Voice) and Andrew Adamson (The Chronicles of Narnia: Prince Caspian, The Lion The Witch and the Wardrobe, Shrek 2, Shrek, and Cirque du Soleil: Worlds Away) will be joining Harry Gregson-Williams for a discussion on their collaborations, delving into the intense and crucial partnership between director and composer.

ComposersLab: LA – April 12
Now in its fourth year, Composers Lab: LA is a day-long workshop for composers, filmmakers, students and other industry professionals looking to engage with music in film. The event will empower and connect the next wave of emerging artists by offering them access to some of the top composers working in film and television today.

Focusing on craft, process and tricks of the trade, the day, led by Peter Golub, Director of the Sundance Institute Film Music program, will be packed with panels and discussions with a diverse line up of presenters and industry veterans. Speakers and panelists will include Academy Award-nominated composer Thomas Newman (Skyfall, American Beauty, Saving Mr. Banks) and composers Jeff Beal (House of Cards, Pollock, Ugly Betty), John Frizzell (Ghost Ship, Legion, Cradle 2 Grave), Blake Neely (The Mentalist, The Last Samurai, Resurrection), Trevor Morris (The Tudors, The Hills Have Eyes, The Borgias) and others. In addition, a panel on career issues will be led by BMI’s Doreen Ringer Ross. The day will also include a complimentary lunch and will end with a reception to network with fellow composers and Sundance Institute staff.

Tickets priced at $125.00 are available at sundance.org/programs/composers-lab-la. Students and BMI members are eligible for a discount. All registrants for ComposersLab: LA receive a discount to ComposersLab: LA On Stage on March 30.

ComposersLab: LA is supported by BMI.

ABOUT THE SUNDANCE INSTITUTE FILM MUSIC PROGRAM — The Sundance Institute Film Music Program connects composers and directors, giving them first-hand experience of the collaborative process, with the goal of nurturing the development of music in film. Each summer, Sundance Institute holds two Labs for composers, one focusing on feature film, the other on documentaries. Both Labs provide a group of talented composers with valuable first-hand experience composing for film. By pairing participating composers with emerging filmmakers supported by the Institute’s Feature Film Program and Documentary Film Program, the Lab’s two segments aim to enhance the role of music in independent film. With leading film composers, directors, music editors, and music supervisors serving as Creative Advisors, Lab Fellows work closely with filmmakers in a supportive atmosphere designed to promote experimentation and collaboration. The Sundance Institute Film Music Program is supported by Time Warner Foundation and the Film Music Foundation. sundance.org/filmmusic

ABOUT SUNDANCE INSTITUTE — Sundance Institute is a global nonprofit organization founded by Robert Redford in 1981. Through its artistic development programs for directors, screenwriters, producers, composers and playwrights, the Institute seeks to discover and support independent film and theatre artists from the United States and around the world, and to introduce audiences to their new work. The Institute promotes independent storytelling to inform, inspire, and unite diverse populations around the globe. Internationally recognized for its annual Sundance Film Festival, Sundance Institute has nurtured such projects as Beasts of the Southern Wild, Fruitvale Station, Sin Nombre, An Inconvenient Truth, Spring Awakening, Born into Brothels, Trouble the Water, Light in the Piazza and Angels in America. sundance.org

ABOUT THE WALLIS — Located in the heart of Beverly Hills, the Wallis Annenberg Center for the Performing Arts (The Wallis) has transformed a Beverly Hills city block, facing Santa Monica Boulevard, between Crescent and Canon Drives, into a vibrant new cultural destination with two distinct, elegant buildings: the historic 1933 Italianate-style Beverly Hills Post Office (now the Paula Kent Meehan Historic Building) and the new, contemporary 500-seat, state-of-the-art Bram Goldsmith Theater. Together these two structures embrace the city’s history and future, creating a new cultural landmark. Within the treasured Post Office, existing spaces are re-imagined into the 150-seat Lovelace Studio Theater, a theater school for young people, a café (both opening in 2014), and gift shop. The Wallis, the first performing arts center to be built in Beverly Hills, is now a home for artists from around the world and audiences of every age. The Wallis produces and presents outstanding theater, music, opera and dance, as well as exciting programming for the family audience.