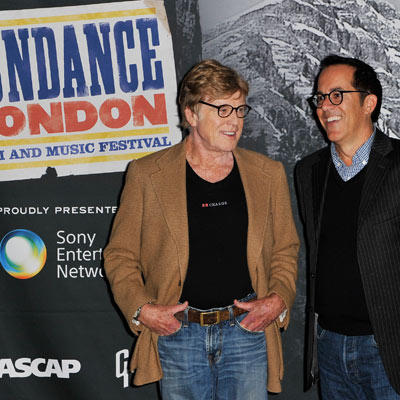 The O2, London, 22 October 2012 — Robert Redford, Sundance Institute and AEG Europe announced today that following the success of the first-ever Sundance London film and music festival in April 2012, the event will return to the world famous London venue, The O2, for a further two years, in 2013 and 2014. Passes and ticket packages for the 2013 event will go on general sale on 9 November online.

The first Sundance London featured screenings of 27 films, including many European premieres, and performances by 17 musical acts. Highlights included the Royal Premiere of HARMONY: A New Way of Looking at Our World attended by HRH, The Prince of Wales; an intimate performance by Rufus and Martha Wainwright following the world premiere of Lian Lunson’s film about the music of their mother; the Opening Night event An Evening With Robert Redford And T Bone Burnett; Tricky and Martina Topley-Bird performing Maxinquaye; and screenings of 14 feature-length and eight short films from the 2012 Sundance Film Festival.  Audiences were also treated to several thought-provoking panels featuring industry experts and artists discussing topical film and music issues.

Robert Redford, President & Founder of Sundance Institute, said: “Sundance was warmly welcomed to London last year, by engaged and adventurous audiences eager to take a chance on independent film, and this makes a second year all the more exciting for us.”

“The vibrant arts community in London has informed this decision as much as anything,” continued Redford. “Seeing what comes of nurturing a broader global community for new voices and varied perspectives in American independent film and music, seems a worthy 21st Century endeavour.”

Alex Hill, Chief Finance and Strategy Officer at AEG Europe said: “The O2 has long been known for hosting some of the world’s most exciting music acts and sports spectacles, and our growth into film with the hugely successful Sundance London film and music festival is a perfect complement to our current calendar. We’re thrilled to be hosting Sundance London again in 2013 and 2014, building even further on the achievements of our inaugural year.”

John Cooper, Director of the Sundance Film Festival, said: “In addition to exposing European audiences to American film and music, we will continue connecting with the UK and European filmmaking community through workshops, panels and conversations designed to create a forum for identifying commonalities of independent filmmaking as well an exchange of best practices and new ideas.”

Sundance London
The Sundance London film and music festival is a partnership between Robert Redford, Sundance Enterprises, Sundance Institute and AEG Europe. The second Sundance London will take place from 25-28 April, 2013 at The O2 and will host the international and UK premieres of films fresh from the 2013 Sundance Film Festival in Park City, Utah, U.S.A., as well as live music performances, panels and events. Programming announcements for the 2013 event are forthcoming, and passes and ticket packages will be on sale from 9 November 2012.