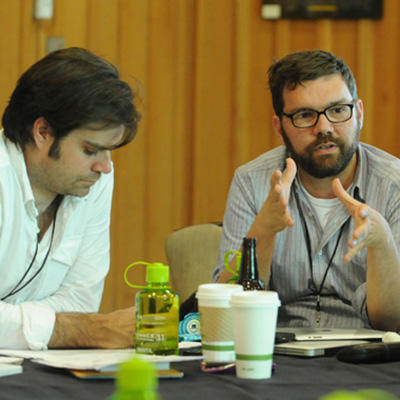 Eleven projects will participate in the Labs (July 29 – August 2), where they will work with an accomplished group of Creative Advisors to advance their creative, communication and problem-solving skills in all stages of a film’s journey from script development to distribution. These Producing Fellows will also receive ongoing creative and strategic support throughout the year, as well as direct granting for further development and production. This year’s Fellows represent eleven projects identified by the Institute’s Feature Film Program and Documentary Film Program and Fund.

Immediately following the Labs, the Summit (August 2-4) takes place. The Summit is an invitation-only gathering that connects 42 producers and directors, including the Producing Fellows, with more than 40 top independent film industry leaders for three days of case study sessions, panels, roundtable discussions, one-on-one meetings and pitching sessions. Multimedia artist Doug Aitken, whose installation Sleepwalkers was featured in New Frontier at the Sundance Film Festival, will deliver a keynote opening address on storytelling and the creative process.

Keri Putnam, Executive Director of Sundance Institute, said, “Independent producers play a crucial role in finding, championing and shaping original cinematic voices. We look forward to gathering with mentors and colleagues to support these talented Producing Fellows at our Lab and Summit.

The Fellows and projects selected for the 2013 Feature Film Creative Producing Fellowship are:

Adelaide
Mark Silverman Honoree & Producer: Rowan Riley
Adelaide Aldridge is cunning, charming, and so obsessed with attention that she’s willing to shoot herself with a BB gun. When she meets a troubled young paramedic who seems capable of giving her the attention she so craves, the two form a flirtatious relationship based on staging fake medical emergencies. Told through an unapologetically comedic lens, Adelaide is about human connection, self-discovery, and the dangerous nature of first love. (Writer/Director: Liliana Greenfield-Sanders)

Originally from New York, Rowan Riley is an LA-based producer who works at Anonymous Content. Prior to arriving at Anonymous, she worked in the Film Finance Department at CAA and the Lynn Pleshette Literary Agency. In her spare time, she programs the Wassaic Film Festival with Liliana Greenfield-Sanders and occasionally blogs for The Huffington Post.

King Jack
Producer: Gabrielle Nadig
When shouldered with the responsibility of watching his younger cousin for the weekend, a delinquent 15 year-old finds himself stumbling towards maturity while struggling against the neighborhood bully. (Writer/Director: Felix Thompson)

Gabrielle Nadig is a New York-based producer and co-founder of the Brooklyn-based production company, Buffalo Picture House. As Head of Production at Buffalo, Gabrielle has helmed projects for clients such as Gucci, Volvo, Etsy.com and the New York City Ballet. She has produced multiple short films that have gone on to screen at festivals including SXSW, Tribeca, and the London Film Festival. Prior to Buffalo, Gabrielle worked for legendary independent producers Christine Vachon and Pamela Koffler at Killer Films.

Papaw Easy
Producer: Brett Potter
Under the watch of his vain, ‘Modern Christian’ uncle, a shy boy forges an unlikely partnership with a foul-mouthed, down and out playboy. (Director: Martha Stephens, Writers: Martha Stephens and Karrie Crouse)

Brett Potter is a co-founder of Calavera USA, a New York-based production company. As a narrative producer, he’s shown features and shorts at festivals all over the world including Sundance, Cannes and SXSW. As a commercial producer, his work has been featured on MTV, Pitchfork, SPIN and more. His recent credits include Martha Marcy May Marlene (Sundance 2011), The Fort (Sundance 2012), Burma (SXSW 2013)and The Places Where We Lived (SXSW 2013). Brett grew up in Indianapolis, Indiana.

Pardon My Downfall
Producer: Chris Ohlson
Pardon My Downfall tells the story of The Jibcutters, a country-western band as infamous for their debauchery as their musical talents, as they try to recapture their previous magic on one final tour through the American South. (Writers: David Zellner & Nathan Zellner, Director: David Zellner)

Chris Ohlson is an Austin-based producer whose first narrative feature, The Overbrook Brothers,directed by John Bryant, premiered in competition at the 2009 SXSW Film Festival and was released by IFC Films. Ohlson also exec produced Paul Gordon’s award-winning The Happy Poet, which screened at more than 40 festivals worldwide, including The Venice Film Festival’s independently run Venice Days section and was a co-producer of Bryan Poyser’s Lovers of Hate, which world premiered in the Dramatic Competition at the 2010 Sundance Film Festival. Ohlson has also won numerous advertising awards for his commercial work and has created a handful of experimental narrative shorts that have screened at galleries and museums around the world.

Solitaire King
Producer: Shrihari Sathe
Newly released Palestinian political prisoner, Ziad, does not feel he is the hero everyone hails him to be. Unable to relive past basketball glory, nor attain the girl of his future; Solitaire King follows a hallucinating Ziad determined to become the champion he believes is expected of him. (Writer/Director: Bassam Jarbawi)

Shrihari Sathe has an MFA-Film Degree from Columbia University and has received fellowships from the PGA, HFPA, IFP and Film Independent to name a few. Sathe’s feature productions have premiered at prestigious film festivals – Pervertigo (2012 Warsaw & Mumbai) and It Felt Like Love (2013 Sundance & Rotterdam). He is currently in post-production on his feature directorial debut Ek Hazarachi Note (1000 Rupee Note).

Tramontane
Producer: Caroline Oliveira
Rabih, a young blind man, searches for a record of his own birth after discovering that his identity card is a forgery. He travels across Lebanon and gradually descends into a Kafkaesque encounter with a nation unable to retell his or its own past. (Writer/Director: Vatche Boulghourjian)

Caroline Oliveira produced the short film The Chair, which was part of the 2012 Cannes Film Festival Official Selection’s Short Film Competition and won several awards including Best Narrative short at SXSW’12 and at LAFF’12. Caroline is currently developing Tramontane with the support of the Venice Biennale College Cinema and the Doha Film Institute. Oliveira was born in São Paulo, Brazil, and holds an MFA from New York University’s Graduate Film Program.

The Fellows and projects selected for the 2013 Documentary Film Creative Producing Fellowship are:

An African Spring
Director: Chai Vasarhelyi
In the Spring of 2011, Senegal was pitched into crisis when President Abdoulaye Wade decided to change the constitution to allow for a third term. An artist-led youth movement erupted to protect one of Africa’s oldest and most stable democracies.

Chai Vasarhelyi is an award-winning director and producer. Her first film, A Normal Life, won Best Documentary at the Tribeca Film Festival in 2003. Her second film, Youssou N’Dour: I Bring What I Love was released in theaters in the U.S. and internationally.

Chicago Boys
Director: Carola Fuentes
The film tells how a group of Milton Friedman’s disciples – backed by a military dictatorship in the ’70s – managed to turn Chile into the first and most extreme model of neoliberalism in the world.

Native Chilean Carola Fuentes has worked in investigative television journalism since 1993 as an on-camera reporter for the news department. She worked for six years in the investigative unit of Teletrece, the main news program for Canal 13. In 1999 she became Canal 13′s correspondent in New York and Washington, D.C.

The Hand That Feeds
Directors: Rachel Lears and Robin Blotnick
Twelve undocumented immigrant workers take on a well-known New York City restaurant chain owned by powerful investors. This David and Goliath story explores what it takes for ordinary people to stand up for their dignity, and win.

Rachel Lears is a freelance shooter/producer and as a director of independent film and video projects, With Robin Blotnick, she recently wrapped post-production as writer/producer on a new feature documentary, Gods and Kings. She has also reported on U.S. politics and culture for Telesur and In These Times magazine, and completed a PhD in Cultural Anthropology in 2012.

Robin Blotnick has worked in film for over ten years, in motion picture development, and as a professional film and video editor. His third feature documentary just won the “Intangible Culture Prize” at the RAI International Festival of Ethnographic Films (Scotland, June 2013). He has also worked on creative activism projects with the Yes Men.

Hillevi Loven is a filmmaker, producer and still photographer based in Brooklyn. In collaboration with MIT anthropologist Natasha Scholl, she co- directed the documentary, Buffet: All You Can Eat Las Vegas, She has produced collaborative work with the Brooklyn art collectives Uniondocs and OVO, and is a member of the Brooklyn Filmmakers’ Collective.

Chris Talbott is a writer, director, producer and president of Cause Effect Agency (www.causeeffectagency.com), mobilizing celebrities and media-makers to further excellent causes.

Street Fighting Man
Producer: Sara Archambault
In a new America where the promise of education, safety and shelter are in jeopardy, three Detroit men fight to build something lasting for themselves and future generations. (Director: Andrew James)

Sara Archambault is Program Director at the LEF Foundation, and Programmer/Co-founder of the award-winning documentary film series The DocYard. She was the Executive Director of the Rhode Island Council for the Humanities and is also frequently an advisor, juror, moderator, and panelist with a number of film festivals.