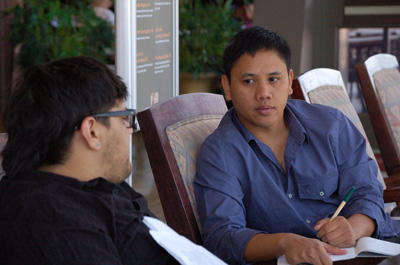 Los Angeles, CA — Sundance Institute today announced that its Native American & Indigenous Program will host its first Native Producers Workshop, August 17 and 18 in Santa Fe, NM. The invitation-only event builds on the Institute’s 30-year tradition of supporting Native American cinema through its Labs and Festival and will focus on the opportunities and challenges unique to producing Native American film, as well as independent cinema in general. The workshop is an extension of Sundance Institute’s offerings for producers, including its annual Creative Producing Labs and Creative Producing Summit.

Among the topics to be addressed are the current climate of producing independent feature films, tax credits and incentives for filming on Native American land, and strategies for getting more Native American films produced and seen. Featured participants include producer Heather Rae (The Dry Land, Frozen River), Chad Burris (Four Sheets to the Wind, Barking Water) and Cara Marcous (Sikumi, On the Ice). The workshop will kick off with a private screening of Andrew Okpeaha MacLean’s On the Ice.

“The legacy of Native American cinema proves that these films can be embraced by wider audiences,” said N. Bird Runningwater, Director of the Sundance Institute Native American & Indigenous Program. “The participants we’ve secured have produced outstanding feature films, and we are enormously grateful that they have agreed to share with attendees the valuable lessons they learned along the way.”

The Native Producers Workshop is in collaboration with Robert Redford’s Milagro at Los Luceros, an initiative that focuses on arts as an economic driver and jobs creator in New Mexico.