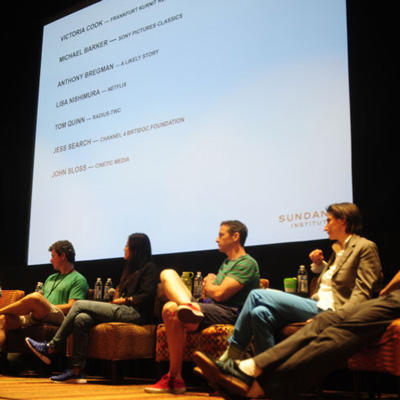 Nine films, both documentary and narrative, will participate in the Labs (July 28 – August 1), where they will work with an accomplished group of Creative Advisors to develop their creative producing, communication and problem-solving skills in all stages of film production. These Producing Fellows will also receive ongoing creative and strategic support throughout the year, as well as direct granting for further development and production. This year’s Fellows represent nine projects identified by Sundance Institute’s Feature Film Program and Documentary Film Program.

The Fellows and projects selected for the 2014 Feature Film Creative Producing Fellowship are:

Black Bats
Producing Fellows: Adam Hendricks and John Lang
Feeling cast out from society, two teens form a romantic relationship under the belief that they’re transforming into monsters. What begins as fantasy ends with horrific consequences as they both lose touch with reality. (Writer/Director: Rick Spears)

Adam Hendricks has had over a decade of experience in the entertainment industry, including development positions at The Jinks/Cohen Company and Macari Edelstein Entertainment. Adam left development to raise financing and produce the independent feature film Caroline and Jackie (Tribeca FF 2012). He developed and produced a variety of web series for Fourth Wall Studios, including Dirty Work, winner of the 2012 Emmy for Original Interactive Programming. In 2013, Adam partnered with John Lang to form Divide & Conquer, a production company specializing in independent films, as well as commercials for clients including Ford, EA Sports and Victory Motorcycles.

John Lang began his career in Austin, Texas, working with the Austin Cinemathéque and South by Southwest Film Festival. Since relocating to Los Angeles in 2008, John has worked in a variety of fields within the film industry including production, development, festivals, and sales. In 2011, John joined Rough & Tumble Films as a development and production executive, where he co-produced We Gotta Get Outta this Place (TIFF 2013). In 2013, John partnered with Adam Hendricks to form the commercial and feature film production company, Divide & Conquer.

I’m No Longer Here
Producing Fellows: Gerry Kim and Mayuran Tiruchelvam
Following the death of his older brother, a teenage Mexican boy is forced to migrate to New York City. When he arrives, he quickly realizes that the violence plaguing his home is no match for the feelings of alienation and loneliness he experiences in America. (Writer/Director: Fernando Frias)

Gerry Kim & Mayuran Tiruchelvam formed Dodgeville Films to produce humanistic narrative and documentary films. Their most recent documentary, To Be Takei, a portrait of actor/activist GeorgeTakei, premiered at the 2014 Sundance Film Festival and was acquired by Starz Digital Media. Gerry produced House of Suh, a feature documentary that premiered at HotDocs in 2010 and aired on MSNBC. Mayuran wrote and co-produced The Girl is in Trouble, executive produced by Spike Lee, and line-produced The Mend, which premiered at SXSW in 2014. In addition to I’m No Longer Here, Gerry and Mayuran are developing Christina Choeʼs Nancy, which was selected for the 2013 IFP Emerging Storytellers Lab, the 2013 Venice Film Festivalʼs Biennale College Cinema Program, and Film Independentʼs Fast Track. They are in post-production on the documentary Farewell, Ferris Wheel, a participant in the 2014 Film Independent Documentary Lab. They received their MFAs from Columbia University in New York City.

Microchip Blues
Producing Fellow: Riel Roch Decter
Fed up with his mundane existence working at the microchip factory, Jimmy teams up with a washed up mystic scientist to build the world’s fastest microchip, win back his ex-girlfriend and save his factory from going quantum.
(Writer/Director: Aaron Beckum)

Riel Roch Decter is a Canadian-born, Los Angeles-based producer and the Co-Founder of Memory, a new media and film company. Riel began his career as the Director of Production for the independent production company Olympus Pictures working on such films as Rabbit Hole and Beginners. He has produced numerous awarding-winning films including the short Night Giant and the feature film The Wait, starring Jena Malone and Chloë Sevigny which premiered at SXSW 2013.

Tracktown, USA
Producing Fellow: Laura Wagner
In a small American town obsessed with competitive running, a famous but sheltered and lonely young runner rebels against her parents, coach and everything she’s ever known in the midst of her first Olympic Trials. (Co-Writer/Director: Jeremy Teicher, Co-Writer: Alexi Pappas)

Laura Wagner is an independent producer, founder of Bay Bridge Productions and current resident at San Francisco Film Society’s FilmHouse. She recently produced the feature film It Felt Like Love by Eliza Hittman, which premiered at Sundance in 2013 and opened in theaters in 2014. She also produced the film Memorial Day by Josh Fox, and she was Associate Producer of the documentary John Leguizamo: Tales from a Ghetto Klown, which premiered on PBS and Pulse: A Stomp Odyssey, the award-winning Imax film directed by the creators of Stomp.

We the Animals
Mark Silverman Honoree & Producing Fellow: Jeremy Yaches
Based on the bestselling novel by Justin Torres, We the Animals is about the brutal yet loving dynamic of a mixed-race working class family, seen through the eyes of the youngest son, as he discovers his heritage, his sexuality and his madness. (Co-Writer/Director: Jeremiah Zagar, Co-Writer: Dan Kitrosser)

Jeremy Yaches is an Emmy-nominated producer and co-founder of Public Record, a production company that specializes in film, TV, branded content, and commercials. He produced the award-winning documentary In A Dream which has screened all over the world and was broadcast on HBO. A graduate of Boston University, Jeremy lives and works in Brooklyn.

The Fellows and projects selected for the 2014 Documentary Film Creative Producing Fellowship are:

Transgender Youth Documentary
Director: Eric Juhola
Producer: Jeremy Stulberg
The Mathis Family in Colorado Springs struggle when their 6-year-old transgender daughter, Coy, is banned from the girl’s bathroom at her elementary school. Coy’s parents hire a lawyer to fight back and the family is thrust into the media spotlight, causing their lives to change forever.

Eric Juhola founded the film and television production company Still Point Pictures and produced the Gotham Award nominated documentary Off the Grid: Life on the Mesa, winning 8 best documentary prizes at festivals around the world, followed by a theatrical release and US broadcast on the Sundance Channel. Eric has additionally directed and produced documentaries and specials for ITVS/PBS, Discovery Channel, MTV, TLC, and TruTV, and has been featured at many film festivals including Tribeca.

Jeremy Stulberg is a documentary filmmaker, writer, and motion picture editor. His feature documentary, Off the Grid: Life on the Mesa, co-directed with his sister Randy, screened at over 40 film festivals in the US and Europe Jeremy has produced and edited award winning documentaries and feature films such as My Mother’s Garden (HotDocs, MSNBC) and White Horse (Berlin FF 2008, HBO).

(T)error
Co-Directors/Producers: Lyric R. Cabral & David Felix Sutcliffe
(T)error is the inside story of  ▓▓▓▓▓▓▓, an active counterterrorism informant for the FBI. Filmed on the ground, it captures the dramatic unraveling of the informant’s 20-year career with the Bureau after the target of his investigation realizes that he’s been set up.

Named one of Filmmaker Magazine’s 25 New Faces of Independent Film, Lyric R. Cabral is an independent documentary filmmaker and photojournalist based in New York City. Cabral’s photography has been recently published through the Gordon Parks Foundation, the Aperture Foundation, the Smithsonian Institution Photography Initiative, and National Geographic Channel UK.

David Felix Sutcliffe is an independent documentary filmmaker recently named one of the “25 New Faces of Independent Film.” His first film, ADAMA, was broadcast on PBS in November 2011. Sutcliffe has worked as a cinematographer on films in Paris, Indonesia, Kenya, and Kansas, and has taught documentary film for the Harlem Children’s Zone, the Tribeca Film Institute, and the Brooklyn Arts Council since 2003.

Uncertain
Co-Directors/Co-Producers: Anna Sandilands & Ewan McNicol
On the shores of a dying lake, neighbors in the once outlaw town of Uncertain, Texas, are haunted by their pasts and battling demons for a future more certain—a tender, humorous southern gothic tale.

Anna Sandilands is a documentary filmmaker and founder of Lucid Inc. a communications company that makes work for clients based in real stories and documentary films. With Ewan McNicol she has made the short films The Roper, Missing, Ufologist, Dirt Racer, and Oil Man and make TV commercials and communications for clients including Google, Apple, Nike, Nokia and BlackBerry. Anna was named Filmmaker Magazine’s “25 Fresh Faces To Watch” in 2013.

Ewan McNicol is a documentary filmmaker, cinematographer, photographer and partner of Lucid Inc. a communications company that makes work for clients based in real stories and documentary films. With Anna Sandilands, his work has received awards including the Webby for Best Documentary, The One Club’s One Screen award for Best Documentary, an Effie and been nominated for a Cinema Eye award. Their films have been screened at film festivals including Sundance, BFI London International Film Festival, Edinburgh, SXSW, True/False, Seattle, Hot Docs, Silverdocs, Visions du Reel and IDFA. Ewan was named Filmmaker Magazine’s “25 Fresh Faces To Watch” in 2013.

Speed Sisters
Producer: Avi Goldstein
The Middle East’s first all-women motor racing team has come together in Palestine. What will it take to go further and faster than anyone thought they could? Speed Sisters captures the drive to follow your dreams against the odds, leaving in its trail shattered stereotypes about gender and the Arab world.

Avi Goldstein co-founded SocDoc Studios to produce story-driven films that engage audiences with social issues. He recently completed the documentary film Fire Lines (to be distributed by Journeyman Pictures) with the Ma’an Network in Bethlehem and Common Ground Productions. Avi received an BA in Psychology from Princeton University and was previously a consultant at Vantage Partners, a Boston-based negotiation and relationship management consulting firm spun out of the Harvard Negotiation Project. He recently completed an MA in Non-Profit Management and Leadership, and facilitates interest-based negotiation and problem-solving skills workshops for high schools students. Speed Sisters is his first feature-length documentary.