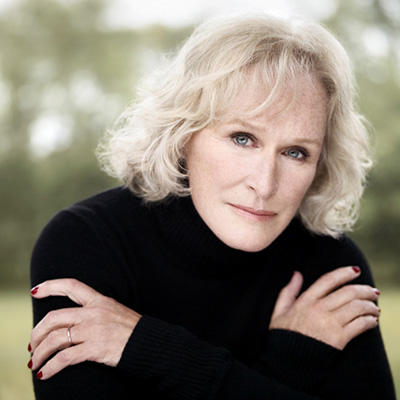 Los Angeles, CA — Sundance Institute today announced that it will present actress and arts advocate Glenn Close with its Vanguard Leadership Award in recognition of her distinguished career in entertainment and advocacy of independent film. The award presentation will take place at the fourth annual ‘Celebrate Sundance Institute’ benefit, chaired by Institute Trustees Jeanne Donovan Fisher and Pat Mitchell, on June 4, 2014 in New York.

Emmy, Golden Globe and Tony Award winner and six-time Academy Award acting nominee Glenn Close has had a distinguished career in film, with prominent roles in The Big Chill, The Natural, Fatal Attraction and Dangerous Liaisons. Close produced and co-wrote the screenplay for last year’s feature film Albert Nobbs, in which she also held the lead role. Also in 2012, Close headlined the fifth and final season of the critically acclaimed original legal thriller, Damages. She is an Emeritus Trustee of the Institute and has served as a Creative Advisor at  its Labs for emerging independent filmmakers. She has appeared in several films at the Sundance Film Festival, including Cookie’s Fortune, Things You Can Tell Just by Looking at Her, Heights, The Chumscrubber and Nine Lives.

Robert Redford, President & Founder of Sundance Institute, said, “Glenn recognized early the need to support independent artists, and she brought to our Board her vision and dedication for doing so. Her contributions to independent film are remarkable and varied, and she continues to build a body of work that inspires other artists.”

Keri Putnam, Executive Director of Sundance Institute, said, “Glenn is among the great champions of independent film, making her a fitting recipient of our Vanguard Leadership Award. We look forward to bringing our creative community together with our friends and supporters in New York to celebrate her many achievements and contributions.”

Glenn Close said, “I am deeply honored to be receiving the Vanguard Leadership Award from Sundance Institute. The Institute is like none other in the world and continues to have a profound impact on all aspects of independent storytelling. Filmmakers who create astounding and original movies against the odds continue to inspire me and give me the courage to believe in what I think is worth the fight.”

Close will be the third recipient of the Vanguard Leadership Award, joining philanthropist and former Institute Trustee George Gund and journalist and film critic Roger Ebert. In addition to the Vanguard Leadership Award, the Institute presents the Vanguard Award, including a cash grant and mentorship from industry professionals and Institute staff, to an emerging artist with creative independence. Benh Zeitlin (Beasts of the Southern Wild) and Ryan Coogler (Fruitvale Station) are past recipients, and the 2014 recipient will be announced in the spring. The Vanguard Awards were founded in 2011 to mark the 30th anniversary of the Sundance Institute Feature Film Program and its founding director, Michelle Satter.

Sundance Institute relies on the generosity of supporters who share a commitment to nurturing new artists, supporting unique and diverse creative voices, and furthering the reach of independent feature and documentary films around the world. The benefit will raise crucial funds to offset the non-profit Institute’s year-round programs for artists, including Labs, grants and the Sundance Film Festival.

For information on event tickets and tables or sponsorship opportunities, visit http://www.sundance.org/support-us/celebrate-sundance-2014/ or contact celebrate@sundance.org.

Founded by Robert Redford in 1981, Sundance Institute is a global, nonprofit cultural organization dedicated to nurturing artistic expression in film and theater, and to supporting intercultural dialogue between artists and audiences. The Institute promotes independent storytelling to unite, inform and inspire, regardless of geo-political, social, religious or cultural differences. Internationally recognized for its annual Sundance Film Festival and its artistic development programs for directors, screenwriters, producers, film composers, playwrights and theatre artists, Sundance Institute has nurtured such projects as Beasts of the Southern Wild, Fruitvale Station, Sin Nombre, An Inconvenient Truth, Spring Awakening, Born into Brothels, Trouble the Water, Light in the Piazza and Angels in America. Join Sundance Institute on Facebook, Instagram, Twitter and YouTube.