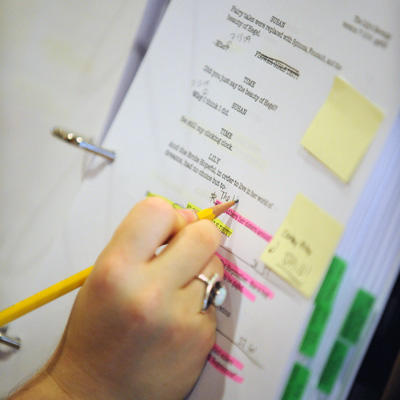 New York, NY — The Sundance Institute Theatre Program is now accepting submissions for the 2012 Sundance Institute Theatre Lab, which will return to the Sundance Resort in Sundance, Utah for the first time since 2009. Under the supervision of Philip Himberg, Producing Artistic Director, and Associate Director Christopher Hibma, the three-week Lab (July 9-29, 2012) is the centerpiece of the Theatre Program’s year-round work and is designed to develop emerging and established artists and to create a place where their original work can be effectively mentored and challenged.

“Returning to the Sundance Resort follows exciting renovations to our familiar and beloved environment in Utah,” said Producing Artistic Director Philip Himberg. “We have had two dynamic years off-site, creating labs in partnership with The Banff Centre, MASS MoCA and Governors Island in New York Harbor. We now look forward to bringing what we’ve learned ‘on the road’ back to our home at Sundance.”

The Theatre Lab provides rehearsal space, dramaturgical support, an acting company, stage management and accommodations/meals for playwrights, directors, choreographers, composers, solo performers and ensembles. The Lab’s unique day-on, day-off rehearsal structure provides Fellows the time to explore revising their work, without the pressure of daily rehearsals, as well as freedom from commercial attention. Fellows are supported by a team of creative advisors, dramaturgs and other colleagues who provide feedback on the material and process. The three-week residency culminates in a closed presentation of each project for Lab participants, followed by a collaborative feedback session.

“Our Theatre Program has established a rich legacy of identifying promising new projects and contributing to their success in immeasurable ways at a critical time in their development,” said Keri Putnam, Executive Director of Sundance Institute. “We look forward to providing a creative and collaborative environment for the artists and projects at the 2012 Theatre Lab and to providing continued support for them as they make their way to the stage.”

Submission guidelines and the application are available at www.sundance.org/theatreapp. The deadline for submission is November 15, 2011. Applicants will be notified on or after April 1, 2012. A maximum of eight projects will be selected to participate.