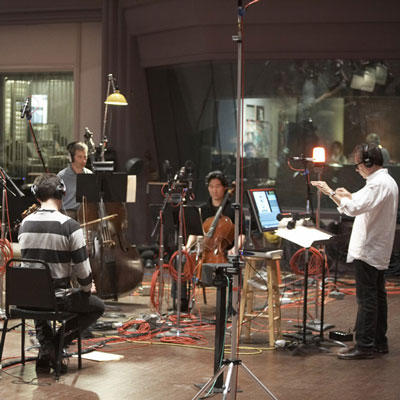 At the Music and Sound Design Lab, a joint initiative of the Institute’s Film Music Program and Documentary Film Program, composers, sound designers and directors will explore the collaborative process of designing a soundtrack for film. Fellows also participate in workshops and creative exercises under the guidance of leading film composers and film music professionals acting as Creative Advisors and who this year will include: composers Todd Boekelheide and Miriam Cutler; re-recording mixer Lora Hirschberg; and editor Vivien Hillgrove. The Composers Lab for narrative films took place in July and was hosted by the Film Music Program and Feature Film Program.

In addition to the Music and Sound Design Labs, the Institute offers labs throughout the year and around the world for independent directors, screenwriters, documentary editors, composers, playwrights, producers and New Frontier artists.

Artists and projects selected for the 2014 Sundance Institute Music and Sound Design Lab – Documentary (Sept. 15-23) are:

Filmmakers:
All filmmakers selected for this Lab have been supported by the Sundance Institute Documentary Film Program.

Marc Silver (director) / 3 1/2 Minutes: 3 1⁄2 Minutes dissects the shooting death of 17-year-old Jordan Davis, the aftermath of this tragedy and contradictions within the American criminal justice system.

Mike Day (director) / The Island and the Whales: The pilot whale hunters of the Nordic Faroe Islands believe that hunting is vital to their way of life, but when a local doctor makes a grim discovery about the effects of marine pollution, environmental changes threaten to end the controversial tradition and change the community forever.

Anna Sandilands and Ewan McNicol (co-directors) / Uncertain: On the shores of a dying lake, neighbors in the once outlaw town of Uncertain, Texas, are haunted by their pasts and battling for their future—a tender, humorous southern gothic tale.

Bill Ross and Turner Ross (co-directors) / Western: Eagle Pass, Texas, and Piedras Negras, Mexico are border towns and a harmonious vision of the modern frontier. Cowboys and lawmen share the desert landscape while international business and multicultural bonds flourish across the Rio Grande. But when darkness descends, two men in Eagle Pass face a new reality that threatens their way of life.

Linda Oh is a bassist from Perth, Australia, based in New York City. She performs with Dave Douglas, Joe Lovano, Kenny Barron and has released three albums to critical acclaim. She received an ASCAP Jazz Composer’s award, 2nd place at the BASS2010 Competition and was the 2012 Downbeat Critic’s Poll “Rising Star.”

Ross Garren is a Los Angeles-based pianist, harmonicist, and composer. He received his B.M. from the University of Southern California where he was named Outstanding Graduate in Composition. In addition to an active freelance career, he has released numerous solo records, has written music featured on a number of television shows, and has served on staff at the Musician’s Institute.

Sage Lewis is a Los Angeles-based composer who has frequently been writing music for US productions filmed in foreign countries including India, Cuba, Pakistan, Haiti, Iran, Italy, Indonesia, Peru and Colombia. His scores have been presented by Havana Film Festival, LA Film Festival, Palm Springs, Telluride, and Slamdance. He also composes for the NYC fashion brand Maiyet.