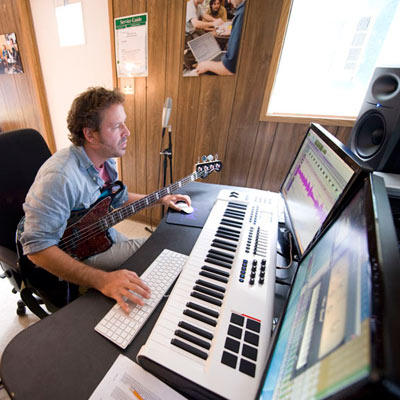 During the Lab, Fellows participate in workshops and creative exercises under the guidance of leading film composers and film music professionals. Fellows also collaborate with filmmakers from the Feature Film Program to explore the process of writing music for film and to create accompanying scores for the filmmakers’ scenes. The program aims to give the composers first-hand experience working on film music, as well as to give the directors insight into the process.

Keri Putnam, Executive Director of Sundance Institute, said, “The Feature Film Composers Lab is an example of how our programs collaborate, for the benefit of artists. By working together, our Film Music Program and Feature Film Program are filling a void in educational and creative opportunities to support emerging artists, especially in the field of film music composition.”

Peter Golub, Director of the Sundance Institute Film Music Program, said, “Our committee had a very exacting job in selecting these six visionary artists from the many applications we received. The diversity of artists selected promises to build an exciting community in the retreat-like setting of our Lab – a community that will shine through in the work produced here.”

The six composers selected for the 2012 Sundance Institute Feature Film Composers Lab are:

Mike Raznick is a Los Angeles based composer with hundreds of credits spanning video games, film, television as well as theatrical trailers.Over the past five years, Mike has been employed and mentored as a lead composer for SomaTone Interactive, where he has scored games from clients including EA, Ubisoft, Atari, Disney, Zynga, Sega and THQ, among others. Recent film composing credits include the multi award-winning environmental documentary Rock the Boat, directed by Thea Mercouffer.

In only six years since landing in New York , internationally-acclaimed guitarist/composer Yotam Silberstein has earned a well deserved spot among the Jazz elite by recording and performing with legendary musicians such as James Moody, The Heath Brothers, Paquito D’Rivera, Monty Alexander, Roy Hargrove, and the Dizzy Gillespie Alumni All-Stars to name a few.

Jason Staczek is a Seattle-based composer, producer and Hammond organ player. His scores for the films of director Guy Maddin have been called “swirling and adventurous” and their latest work together, Keyhole, is currently in theaters worldwide. Jason also collaborates with musical inventor Ela Lamblin writing for experimental instruments like the Shrimp Platter and the Koola, a Styrofoam harp. He plays with ATO artist Lindsay Fuller and has conducted orchestras on three continents.

Karen Tanaka is a versatile composer and pianist. Her works have been performed by distinguished ensembles and orchestras worldwide including the BBC Symphony Orchestra, LosAngeles Philharmonic and Orchestre Philharmonique de Radio France. Various dance companies, including the Nederlands Dans Theater, have often featured her music. She has also composed for documentary films and short animations. She lives in Los Angeles and teaches composition at California Institute of the Arts.

Philip White was born and raised in Madrid, Spain. His recent credits include the feature documentary Speak and the psychological thriller The Somnambulist. He writes additional music for the CW series Supernatural and co-composed the score to the videogame James Bond: Quantum of Solace. His choral piece, Hong Kong Harbor 1984, recently received its world premiere by the Angel City Chorale.