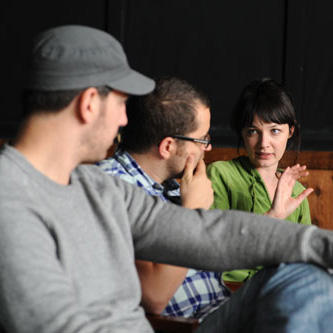 The New Frontier Story Lab is an intensive, residential retreat focused on creative support, which includes individualized story sessions, conversations about key artistic, design and technology issues, and case study presentations. Drawing talent and expertise from all of Sundance Institute’s creative programs, including Feature Film, Documentary Film, and the Sundance Film Festival, the Lab has been planned under the supervision of Michelle Satter, Founding Director of the Sundance Institute Feature Film Program.

Robert Redford, President & Founder of Sundance Institute, said, “The lines between previously distinct forms of personal expression are blurring at an ever-accelerating pace with the hybrid of art and technology, and as artists drive this evolution, we continue to look for new ways to support and advance their work. The New Frontier Story Lab is a rare opportunity for these artists to explore their concepts and consider the impact they may have on how stories are experienced in the future.”

Satter said, “Our establishment of the New Frontier Story Lab last year was a significant milestone. Supporting projects that are immersive, interactive and tell stories across multiple platforms is one of the ways that we are providing new opportunities for audiences. The guidance of our Creative Advisors is particularly critical, as it brings together experts from diverse disciplines, all of whom share a unique understanding of the importance of story in art, film, gaming and new media.”

Projects supported at the inaugural New Frontier Story Lab in 2011 include Rome, a multiplatform interactive narrative experience from Director/Creator Chris Milk, inspired by the music produced by Danger Mouse and Daniele Luppi; Question Bridge: Black Males, a transmedia art project that seeks to represent and redefine Black male identity in America, which premiered in the New Frontier exhibition at the 2012 Sundance Film Festival; and Jigar Mehta and Yasmin Elayat’s interactive documentary project 18 Days in Egypt, telling the story of the first 18 days of the Egyptian revolution through crowd-sourced media.

The creative teams and projects selected for the 2012 New Frontier Story Lab are:

Reflecting the global collaboration that fuels its production, The Great American Funeral takes us on the 1,654-mile journey that carried the body of President Abraham Lincoln from Washington D.C. to its final resting place in Springfield, Ill. This procession, meant to reunite our war-torn nation, quickly becomes fraught with trouble as the soldiers and embalming surgeons tasked with this quest find themselves soon battling the elements, the press, a weary public and each other as they endeavor to keep the President’s remains intact.

Cory McAbee (writer/director) is best known as writer/director of the feature films, The American Astronaut (2001), Stingray Sam (2009) and as singer/songwriter for the musical group The Billy Nayer Show (1989-2011). McAbee is developing a feature-length opera that is being produced by Justin Lin in association with Barnstorm Pictures and Perfect Storm Entertainment. He is currently touring in support of his recent non-budget mini-feature Crazy and Thief (2012) while performing music live for Captain Ahab’s Motorcycle Club.

Gregory Bayne (producer) is a filmmaker living and working in Idaho. A veteran editor and cinematographer on numerous feature and documentary films, he has produced and directed two feature films since 2009 – the narrative thriller Person of Interest and the intimate fan-funded documentary Jens Pulver | DRIVEN, released by Warner Brothers in 2011. Currently, Bayne is in production on his second feature documentary, BLOODSWORTH: An Innocent Man, about Kirk Noble Bloodsworth, the first death row inmate exonerated by DNA evidence in the United States.

Kickstarder
Yung Jake & Vince McKelvie
U.S.A.
Kickstarder is a self-funding web series slash video mixtape that chronicles the rising career of Yung Jake. The project’s narrative progression will be informed by both incoming donations and audience participation as Yung Jake hustles for fame and fortune.

Yung Jake (performer) was born on the Internet in 2011, making quirky rap videos on YouTube. Most recently, Jake broke though the third wall of internet user experience with E.m-bed.de/d, a zeitgeisty, self-aware web video experience laced with pop-culture references, inside art jokes and editing tricks, then dozed with swag. A very recent Cal Arts alum, Jake continues to make videos about the Internet, of the Internet, for the Internet.

A graduate of Cal Art’s School of Experimental Animation, Vince McKelvie (programmer) has worked in film, web, performance, stills, games, and interactive installations. Recently, McKelvie spent a year and a half abroad in South Korea writing custom interactive music visualizers and real-time video editing software for live collaborative audio visual performances. The lack of gallery space abroad led him to increase accessibility to his work by developing websites and games with a particular focus on mobile devices and applications, eventually leading to his collaboration with Yung Jake.

Reinvention Stories is a transmedia project telling stories of people from a hard-hit post-industrial Ohio town as they struggle to start over in the wake of economic collapse. The project, part of the national Localore initiative sponsored by AIR includes radio, documentary cinema and online interactive nonfiction storytelling.

The Silent History is a serialized novel written and designed specifically for the iPhone and iPad that uses collaboration and physical exploration to tell the story of a generation of children born without language.

Eli Horowitz (Co-Creator) was the managing editor and then publisher of McSweeney’s for eight years. He is the coauthor of The Clock Without a Face, a treasure-hunt mystery, and Everything You Know Is Pong, an illustrated cultural history of ping pong. He was born in Virginia and now lives in San Francisco.

Russell Quinn (Co-Creator) is a software developer, digital designer, and cofounder of the multinational digital agency Spoiled Milk. He began his career making tools for game consoles at Sony, and was most recently employed as McSweeney’s Digital Media Director where he developed and implemented their e-book strategy and relaunched their popular humor website and store. A native Englishman, Russell left the UK in 2005, eventually settling in California after periods in Denmark and Switzerland.

What happens to us when our culture moves behind glass? A first-person interactive documentary for tablet devices, Touch examines the demise of print and other forms of tangible culture.

The Goggles – Paul Shoebridge and Michael Simons – are award-winning authors, artists and directors who have spent their professional lives telling stories in compelling new ways. They have produced magazines (Adbusters), books, television spots, and major advocacy campaigns for TV Turnoff Week, Buy Nothing Day and the Blackspot Sneaker, which was listed as one of The New York Times’ “Best Ideas” of 2004. Their interactive documentary, Welcome to Pine Point, produced by the National Film Board of Canada, received more than a dozen international awards, including two Webbys, and was featured at numerous festivals and competitions. Shoebridge and Simons have given talks around the world on the confluence of politics, art, design and storytelling.

Through the use of documentary film, collaborative storytelling, digital cultural mapping, and a role-playing interactive game, Traveling While Black bridges the gap between the past and the present by raising critical empathy about the harrowing landscapes African-Americans traversed during the pre-civil rights era and facilitating a dialogue about the challenges contemporary minority travelers still face today.

Roger Ross Williams (director/producer) directed and produced Music by Prudence, which won the 2010 Academy Award for documentary short subject and was broadcast on HBO. He is the first African American to win an Oscar® for directing and producing a film, short or feature. His latest feature-length documentary, God Loves Uganda, is currently in post-production and will premiere on PBS in 2013.

In her various roles as producer, distribution consultant and attorney, Woo Jung Cho (producer) has worked on over 20 award-winning documentary features and is the Head of Production at Lovett Stories + Strategies. She produced Twelve Disciples of Nelson Mandela with director Thomas Allen Harris, which premiered at the Toronto International Film Festival and broadcast on PBS’s POV and Global Voices series. Her latest documentary feature, Fragments of Theresa Hak Kyung Cha, is currently in post-production.

For more information about the New Frontier Story Lab go to http://www.sundance.org/video/new-frontier-story-lab/