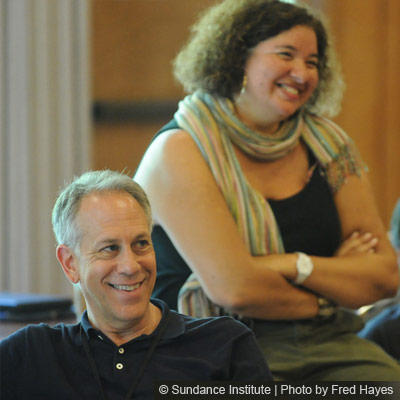 New York, NY — Sundance Institute today announced the nine projects selected to participate in its 2014 Theatre Lab, July 7-27 at the Sundance Resort in Utah. The Lab is the centerpiece of the Institute’s year-round work with the theatre community and is one of 10 residential labs the Institute will host for artists this summer, collectively representing the most promising new independent theatre and film projects.

The projects selected for the 2014 Sundance Institute Theatre Lab are (project descriptions below):

Under the supervision of Theatre Program Artistic Director Philip Himberg and Producing Director Christopher Hibma, the three-week Lab supports emerging and established playwrights and directors developing new work for the stage. For the Lab, the Institute provides rehearsal space, dramaturgical support, and an acting company, creating an immersive environment where artists can experiment, see their work take shape and collaborate with Creative Advisors, dramaturgs, actors and Institute staff to address the compelling needs of their text. The Lab’s unique day-on, day-off rehearsal structure provides Fellows additional time to explore revisions and new writing between rehearsals. The Lab culminates in a closed presentation of each project for Lab participants, followed by a collaborative feedback session.

Keri Putnam, Executive Director of Sundance Institute, said, “Developmental opportunities for independent artists are exceedingly rare and yet critical to the success of their projects and careers. Our Lab model offers an independent-minded environment for artists to engage with their work, ask questions, build text and take risks, ultimately helping these artists achieve their unique vision.”

Himberg said, “Our Theatre Lab draws on the strengths and generosity of the theatre community to encourage risk-taking and to develop networks of support that will extend throughout each project’s journey to the stage. This year’s Fellows, bring wildly innovative stories and approaches.  It heralds an exciting and productive gathering of new talent and alumni returning “home” and much that audiences can anticipate experiencing onstage soon.”

In addition to the Theatre Lab, the Institute offers labs throughout the year and around the world for independent directors, screenwriters, documentary editors, composers, playwrights, producers and New Frontier artists.

Caught
Written by Christopher Chen
Directed by TBA
An art gallery hosts a retrospective of the work of a legendary Chinese dissident artist who was imprisoned in a Chinese detention center for a single work of art. Recently profiled in The New Yorker, the artist himself is present, and shares with patrons the details of an ordeal that defies belief. A labyrinthine exploration of truth, art, social justice and cultural appropriation, where nothing is as it first appears.

The Good Book
Written by Denis O’Hare & Lisa Peterson
Directed by Lisa Peterson
The Good Book tells the story of how the Christian Bible became the most powerful collection of texts in human history. Through the lens of two contemporary characters and their struggles with faith, The Good Book examines how and why belief becomes organized, and how the document known as the Bible grew from oral history into the powerful, even dangerous text that American fundamentalists use today.

Posterity
Written and directed by Doug Wright
Norway’s most celebrated sculpture is commissioned to create the last official portrait of her most famous writer, but Henrik Ibsen proves to be an irascible, contentious sitter, as the two men wage war over his legacy and his likeness.

Skeleton Crew
Written by Dominique Morisseau
Directed by Kamilah Forbes
In this third and final installment of a three-play Detroit cycle, a makeshift family of workers at the last exporting auto plant in the city navigates shifting power dynamics, foreclosure and inevitability as they are pushed to the limits of survival. When the barrier between blue collar and white collar gets blurred, how far over the lines are they willing to step?

So Go the Ghosts of Mexico, Part Two
Written by Matthew Paul Olmos
Directed by Lee Sunday Evans
Composer/Sound Designer Marios Aristopoulos
The second of a three-play cycle about the U.S./México drug wars focuses on the ridiculous and machismo world of the Mexican drug cartels, as played by a cast of all women. The play, with songs, involves two warring cartels where the reins of power are always shifting as the draw of excess and the money of America presides over loyalty.

T.
Written by Dan Aibel
Directed by James MacDonald
A meditation on the hunger for a quintessentially American sort of success, T. tells the story of an elite figure skater and her manager-husband as they navigate toward the most important competition of their lives.

Bed by Sheila Callaghan
Artist-in-Residence
A piece-in-progress exploring the ten-year relationship of a loving couple headed for implosion and the man who comes between them, all set in one giant bed.

Sundance Institute Theatre Program
The Theatre Program has been a core component of Sundance Institute since Robert Redford founded the Institute in 1981. The Theatre Program identifies and assists emerging theatre artists, contributes to the creative growth of established artists, and encourages and supports the development of new work for the stage. Under the guidance of Artistic Director Philip Himberg and Producing Director Christopher Hibma, the Theatre Program is one of the leading play development programs in the United States. Titles such as Appropriate, Fun Home, A Gentleman’s Guide to Love and Murder, Circle Mirror Transformation, An Iliad, The Lily’s Revenge, The Good Negro, The Light in the Piazza, Passing Strange, Stuck Elevator, Spring Awakening, The Laramie Project and I Am My Own Wife have gone from Theatre Program Labs to production from coast to coast and internationally, garnering multiple Pulitzers, Tonys, OBIEs and other recognition. The Theatre Program’s East Africa initiative is the only professional program of its type on the continent, offering Labs, cross-cultural exchange, mentorship and exposure to artists in six African countries. The Theatre Program’s newest initiative is the Theatre Directors Retreat in France. sundance.org/theatre