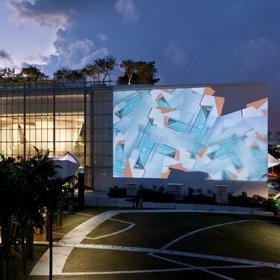 Sundance Institute and Miami Filmmakers Collective are collaborating to bring New Frontier programming to Miami’s creative community to cultivate and encourage story innovation at the convergence of art and technology. This is the first-ever Sundance Institute New Frontier Flash Lab in a location outside of its annual fall program in the mountains of Utah. The effort is being funded by the John S. and James L. Knight Foundation.

Since 2007, Sundance Institute’s New Frontier program has fostered exciting independent artists pushing the boundaries of story at the convergence of art and technology. New Frontier artists, creative technologists, advisors and audiences are experimenting with language, forms, tools and methodologies that will become the standard for future storytellers.

On February 15, 2014, from 4pm to 6pm, the Miami arts community is invited to attend the New Frontier Flash Lab’s Public Forum, designed to share learning from New Frontier project’s experiments in fiction, non-fiction, and visual storytelling; to encourage the expansion of artist’s creative practice; and to challenge them to contribute to the evolution of story. Panelist include: Scott Snibbe (Bijork’s Biophila & Philip Glass’ Rework), Jonathan Harris (Cowbird & We Feel Fine), Jigar Mehta (18 Days in Egypt) and Susan Bonds (CEO, 42 Entertainment). For tickets http://bit.ly/19OgaVh

Earlier that day, a select group of artists working in this convergence space will participate in a series of intensive sessions with these New Frontier advisors and alumni artists to dive more deeply into the lessons learned and best practices gained by the presenters.

Additional support for this collaboration is provided by the New World Symphony, America’s Orchestral Academy, Borscht Corp and The Betsy-South Beach.

About Sundance Institute:
Founded by Robert Redford in 1981, Sundance Institute is a global, nonprofit cultural organization dedicated to nurturing artistic expression in film and theater, and to supporting intercultural dialogue between artists and audiences. The Institute promotes independent storytelling to unite, inform and inspire, regardless of geo-political, social, religious or cultural differences. Internationally recognized for its annual Sundance Film Festival and its artistic development programs for directors, screenwriters, producers, film composers, playwrights and theatre artists, Sundance Institute has nurtured such projects as Beasts of the Southern Wild, Fruitvale Station, Sin Nombre, An Inconvenient Truth, Spring Awakening, Born into Brothels, Trouble the Water, Light in the Piazza and Angels in America. Join Sundance Institute on Facebook, Instagram, Twitter and YouTube.