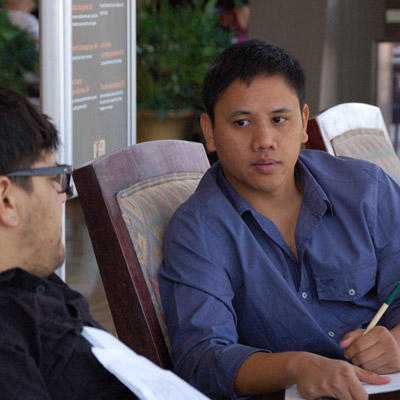 Los Angeles, CA — Sundance Institute today announced the four fellows and projects selected for the 2012 NativeLab Fellowship, a two-stage development program that provides continuous and direct support to Native American, Native Hawaiian, and Alaskan Native film artists. For the first stage, filmmakers participate in an intensive five-day workshop (May 23-27) on the homelands of the Mescalero Apache Tribe, where they receive guidance from seasoned artists including Fenton Bailey (Inside Deep Throat; Party Monster, The Eyes of Tammy Faye), Adam Bala Lough (Bomb The System, The Carter), Billy Luther (Miss Navajo, Grab) and Zach Sklar (JFK, The Feast of the Goat). The second stage brings Fellows to the Native Forum during the 2013 Sundance Film Festival and provides opportunities networking with film professionals who advise them on the business of cinema.

Bird Runningwater, Director of the Sundance Institute Native American and Indigenous Program, said, “Key to the success of our NativeLab Fellowship is the holistic support it provides on an ongoing basis. Our time at the May workshop will mark the beginning of our relationship with these artists and projects.”

Keri Putnam, Executive Director of Sundance Institute, said, “Across many of our programs, we continue to be committed to supporting emerging Native American artists and helping their voice and vision be shared with the world. The artists and projects announced today hold great promise for continuing a rich legacy of Native American storytelling.”

The projects and participants selected for the 2012 Sundance Institute NativeLab Fellowship are:

I Am Thy Weapon / Razelle Benally (Oglala Lakota/Navajo) – Shortfilm/Multimedia
I Am Thy Weapon is the hard-edged fictional account about a dispirited seventeen year-old young woman and her precocious eight year-old sister, as they search for light in the heavy shadows of life cast by poverty and apathy on the San Carlos Reservation in Arizona.

Razelle Benally was born in 1988, of Oglala Lakota and Navajo blood. Her firsthand experience while filming and traveling with renowned skateboard company Apache Skateboards has helped her hone a self-developed style of editing and directing. She most notably gained acclaim for her short documentary The Humble, and six-minute experimental piece Love is a Losing Game. Benally is one of five young women featured in the 2011 documentary, Apache Chronicle. She has shown in galleries in Long Beach, CA and in Phoenix, AZ. Her films have been shown nationally and internationally at select screenings in Portland, Winnipeg Manitoba Canada, and Sweden. She earned a third place award in the 2007 AIHEC Film Festival, and is the 2010 Santa Fe Indian Market jury-awarded winner for Best Documentary in SWAIA’s Classification X.

Out of State / Ciara Leina’Ala Lacy (Hawaiian) – Feature Documentary
In an Arizona prison, why have a group of native Hawaiian career criminals—incarcerated thousands of miles from their families and home—formed their own weekly hula club?

Ciara Lacy has worked as a producer and writer of both nonfiction and scripted programming. She has produced and written for nonfiction television shows airing on PBS (Science Investigators), ABC (Wife Swap), TLC (Little People, Big World), Discovery (To Catch a Thief), Bravo (The Real Housewives of New Jersey) and A&E (Jackpot Diaries). As a production supervisor, production manager, and assistant on scripted features, Ciara has worked with talent like Joseph Gordon Levitt, Elijah Wood, Vince Vaughn and Kristen Wiig on films including Uncertainty and Revenge for Jolly! Ciara has produced music videos and concert DVDs for various recording artists including the Dave Matthews Band, John Mayer, My Morning Jacket, the Format, Cindy Lauper and Martina McBride. She has also produced feature documentaries for Dave Matthews, My Morning Jacket and Teddy Geiger. Ciara is currently in partnership with F5 Productions to develop a slate of documentary films that use both strong characters and investigative journalism to challenge the creative and political status quo. She holds a B.A. in psychology from Yale University and is a graduate of the Kamehameha Schools in Hawaii.

Honor Beats: Singers of the Four Directions / Jeffrey Patrick Palmer (Kiowa) – Feature Documentary
Enter the sacred circle of Native drum groups and follow them from the quiet corners of Indian Country, to the spectacle of competitive powwow arenas, and on to hero status

Jeffrey Palmer is a burgeoning Kiowa filmmaker and media artist. Academically and professionally, he received his B.A. in Anthropology from the University of Oklahoma in 2000, focusing on cultural and media representations of Native American society in the 20th century. In 2006, he received his M.A. in Native American Studies from the University of Oklahoma, focusing on Native American exploitation in early and Hollywood cinema. In 2008, he was the Director of Education for the Native American Journalists Association. He received his M.F.A. in Film and Video Production at the University of Iowa in 2012, with an emphasis in documentary film and video installation. Over the last three years, he worked extensively on projects highlighting Native culture in the state of Iowa. In 2012, he returned to Kiowa Country to work on his M.F.A. thesis titled: “Origins: Digital Reclamation of Kiowa Storyscapes”.

Circle / Brooke Swaney (Blackfeet/Salish) – Feature Film
Auralee wants a kid, Frankie wants love, and only one knows it is each other.

Brooke Pepion Swaney (Blackfeet & Salish) is a film director and writer, who received her M.F.A. in Film and Television from Tisch School of the Arts, New York University. She has made several short films while at NYU, including Continental Divide (2008 ImagineNATIVE Film + Media Arts Festival and 2008 Winnipeg Aboriginal Film Festival). Prior to NYU, she worked in at a non-profit, the Indian Law Resource Center, a legal organization dedicated to protecting the land and culture of Indigenous people throughout the Western Hemisphere. In 2003, she graduated with honors from Stanford in psychology, writing an honors thesis on the media’s effect on American Indians. Brooke, a curious and observant child, has cultivated her inquisitive nature in her work. Her first film, The Indigenoid, showed a young Native man awakening to the Native stereotypes in everyday life. It was nominated for Best Live Short at the 2005 American Indian Film Festival in San Francisco. Brooke was accepted to the Montana Artists Refuge during their 2009 American Indian Artists Residency and their October Writers Residency. In 2009,she was also a finalist in a time sensitive short film competition for the Madrid tourism board. In 2011, Ok Breathe Auralee, premiered at the Sundance Film Festival in Park City, Utah.

Sundance Institute Native American and Indigenous Program
Rooted in the recognition of a rich tradition of storytelling and artistic expression by Native American and Indigenous peoples, Sundance Institute’s Native American and Indigenous Program operates the NativeLab Film Fellowship established for emerging Native American/Alaska Native/Native Hawaiian filmmakers. The program has also established filmmaker labs in New Zealand and Australia which have spawned such projects as The Strength of Water (New Zealand), Samson and Delilah (Australia), Bran Nue Dae (Australia) and Here I Am (Australia). The program also collaborates with the other artist programs of the Institute and scouts worldwide and across the United States for Indigenous artists with projects that can be supported through the Institute’s Feature Film Program, Creative Producers Summit/Creative Producing Fellowship and Sundance Film Festival. Filmmakers and projects identified for support include Sterlin Harjo, his Spirit Award–nominated Four Sheets to the Wind, and his follow-up feature Barking Water; Academy Award nominee Taika Waititi, his feature debut Eagle vs Shark, and his follow-up feature Boy; Billy Luther’s award-winning Miss Navajo and his second feature documentary Grab; and Andrew Okpeaha MacLean’s Sundance Film Festival Jury Prize–winning Sikumi and his feature debut On the Ice, which was awarded the Crystal Bear Award and the Best First Feature Prize at the 61st Berlinale; and Aurora Guerrero’s Mosquita y Mari, which premiered at the 2012 Sundance Film Festival. Forthcoming projects include Sydney Freeland’s Drunktown’s Finest and Yolanda Cruz’s La Raya. www.sundance.org/native