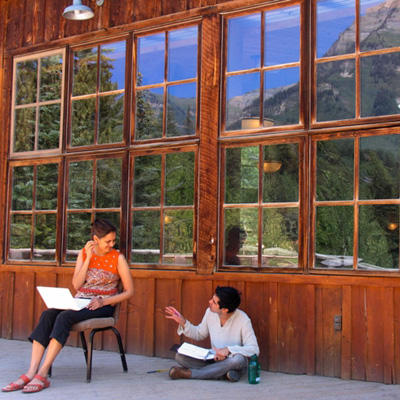 New York, NY — Sundance Institute today announced the eight projects selected from nearly 900 submissions to participate in the 2012 Theatre Lab, July 9-29 at the Sundance Mountain Resort. Under the supervision of Philip Himberg, Producing Artistic Director, and Associate Director Christopher Hibma, the Lab is the centerpiece of the Theatre Program’s year-round work and is designed to support emerging and established artists and to create a place where their original work can be effectively mentored and challenged.

“The eight projects we’ve selected for 2012 are diverse in every sense,” said Himberg.”We have had the pleasure of discovering the work of writers not known to us prior to this submission process. Our slate includes an NYU undergraduate student, as well as seasoned Sundance Institute alumni that we are welcoming home. Artists hail from Hawaii, New York, Chicago, Nigeria and Tanzania. We look forward to working with these artists to realize their visions for the unique and indelible worlds they seek to create on stage.”

The Theatre Lab provides rehearsal space, dramaturgical support, an acting company, stage management and accommodations/meals for playwrights, directors, choreographers, composers, solo performers and ensembles. The Lab’s unique day-on, day-off rehearsal structure provides Fellows the time to explore revising their work, without the pressure of daily rehearsals, as well as freedom from commercial attention. The three-week residency culminates in a closed presentation of each project for Lab participants, followed by a collaborative feedback session.

Fellows at the Lab will be supported by a team of advisors and colleagues who provide feedback on the material and process. Dramaturgs for the Lab are: Janice Paran, Artistic Associate; Roberta Levitow, Artistic Associate; Mame Hunt, Artistic Associate; and Jocelyn Clarke (Ireland). Artists in Residence are: Eric Wainaina, composer and bookwriter from Nairobi, Kenya; and Zainabu Wallo, playwright from Ikeja, Nigeria. The eight projects were selected with input from an Advisory Committee including Lydia Diamond, David Henry Hwang, Stephen Wadsworth, Mame Hunt and Janice Paran.

Keri Putnam, Executive Director of Sundance Institute, said, “That four of the eight projects selected are written by artists who participated in the 2011 Sundance Institute Playwrights Retreat at Ucross Foundation is of particular significance to us. We value our relationships with these artists and projects, as well as all of those we support, from development to production.”

Projects for the 2012 Sundance Institute Theatre Lab are:

Appropriate
By Branden Jacobs-Jenkins
Director TBD
The Lafayette family patriarch (and compulsive hoarder) is long dead, and it’s time to deal with the deserted and heavily mortgaged Arkansan homestead. When his three adult children descend upon the former plantation to liquidate the estate, a gruesome discovery among his many belongings become just the first in a serious of treacherous surprises. A play about family secrets, memory loss and the art of repression.

Hands
By Ken Greller
Director TBD
Set in a suburban Baltimore diner, Hands charts the friendship between Alex and Ray over 22 years. As Alex begins the process of gender transition, Ray treads the dangerous waters of a potentially misguided spiritual revelation. The friends grow further apart until their only commonality is a shared disconnect over the town they’re from and can’t seem to escape.

ToasT
By Lemon Andersen
Directed by Elise Thoron
Willie Green a.k.a. “Dolomite,” the famous Folklore hero from the old Black Narratives, is still known as the baddest badass out of San Antone, but he’s aged and has been locked up for murder in Attica’s D-Block for the last 27 years. Word is brewing throughout Attica that a riot is coming, but Dolomite and his cellmates would rather not get involved until the youngest inmate in D-Block gets a vicious beating by the officers for talking like a liberal about the prison conditions. Does Dolomite join the riots and take vengeance upon the officers for what they did – or lock himself in his cell and hope for a promised parole date and the chance to taste freedom? ToasT is a commission of the Public Theater/UTR.