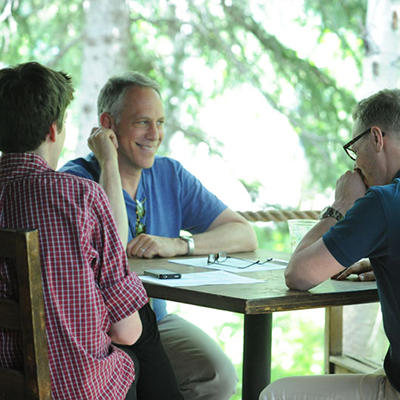 New York, NY — Sundance Institute today announced the acting company, artists-in-residence and creative advisors for the seven projects being developed at its 2013 Theatre Lab, July 8-28 at the Sundance Resort in Utah. Under the supervision of Artistic Director Philip Himberg and Producing Director Christopher Hibma, the Lab is the centerpiece of the Theatre Program’s year-round work and is designed to support both emerging and established artists and to create a place where their original work can be effectively mentored and challenged free from commercial pressure.

Himberg said, “The 2013 Theatre Lab Fellows have stories to tell, stories about African immigrants, and gay heroes, and Yiddish authors and Palestinian teachers: stories which throw new lenses on our diverse and complicated world. By providing the necessary resources and freedom for these artists to explore, each playwright both contributes to and benefits from an engaging and productive creative environment.”

ARTISTS-IN-RESIDENCE
These artists are the Theatre Program’s first guests from Middle East/North Africa as part of its new commitment to artists from this region.

EAST AFRICAN FELLOWS
These artists participated in the 2012 Theatre Stage Directors Workshop in Addis Ababa, Ethiopia and at the Lab will divide their time between mentorship sessions with director Liesl Tommy and rehearsals of Lab projects.

The Fre
By Taylor Mac
Directed by Lisa Peterson

This project is part of Mac’s “Kothornos Festival” (four plays that will premiere separately but ultimately be performed in an all-day festival mirrored after the Greek Dionysia). It is an all-ages play written in the form of Old Comedy. It is the story of an intellectual aesthete, who is trapped inside a mud pit in the middle of a swamp, and his desperate attempt at escaping the swamp’s fatuous inhabitants who call themselves, the Fre. Commissioned by the Children’s Theater Company.

Sibblies Drury’s play centers on two women (the Mother and the Girlfriend of a conceptual artist who has vanished) leaving them to sort through his overwhelming body of work. It is a piece about artists, legacy and photography that asks about what we try to leave behind, what we actually leave behind, and how we deal with being left.

Abasiama Ekpeyoung came to America with high hopes for her arranged marriage and her future, intent on earning a degree and returning to Nigeria. But when her husband is seduced by America, she is forced to choose between the Nigerian or the American dream.

The Vagrant
By Mona Mansour
Directed by Mark Wing-Davey

England/London 1982. Part three of a trilogy. As Arab émigré, Adham faces his last hurdle to secure a coveted permanent position at university, a wave of “domestic terrorism” hits his chosen city, while at the same time, the family he’s left behind in the Middle East faces their own escalating horrors. The life Adham has created threatens to unravel, destroying the political and personal equilibrium he’s spent 15 years perfecting. Commissioned by the Public Theater.

Vogel’s latest play follows the circuitous path of Scholem Asch’s play God of Vengeance from 1905 Warsaw to 1951 Stamford Connecticut. It chronicles a contentious work written by a young man during the Yiddish Renaissance: from the fights in the salon after its first reading in Warsaw to its triumph on Second Avenue New York—and onward to 1923 Broadway. What should be the pinnacle of the Yiddish theatre crossing over to the Great White Way becomes a spectacle of scandal: prosecution for obscenity, struggles over anti-Semitism, and oh yes, the first kiss between two women on the American stage. When does one fight to produce a manuscript? When does prudence dictate a manuscript stays in the drawer? And when should an author burn his/her own script? Commissioned by Oregon Shakespeare Festival and Yale Repertory Theatre.

A politically incorrect action-comedy following the life of Unity Spencer, a young colonial girl imbued with immortality but cursed to fight in every American conflict from the American Revolution to present day and beyond.

Sundance Institute Theatre Program
The Theatre Program has been a core component of Sundance Institute since Robert Redford founded the Institute in 1984. The Theatre Program identifies and assists emerging theatre artists, contributes to the creative growth of established artists, and encourages and supports the development of new work for the stage. Under the guidance of Artistic Director Philip Himberg and Producing Director Christopher Hibma, the Theatre Program is the leading play development program in the United States. Titles such as Spring Awakening, An Iliad, I Am My Own Wife, The Good Negro, Circle Mirror Transformation, Passing Strange, Grey Gardens, Crowns and Marie Antoinette have gone from Theatre Program Labs to production from coast to coast and internationally, garnering multiple Pulitzers, Tonys, OBIEs and other recognition. The Theatre Program’s East Africa initiative is the only professional program of its type on the continent, offering Labs, cross-cultural exchange, mentorship and exposure to artists in six African countries. The Theatre Program’s newest initiative is the Theatre Directors Retreat at Domaine de l’Armellière in Arles, France. www.sundance.org/theatre