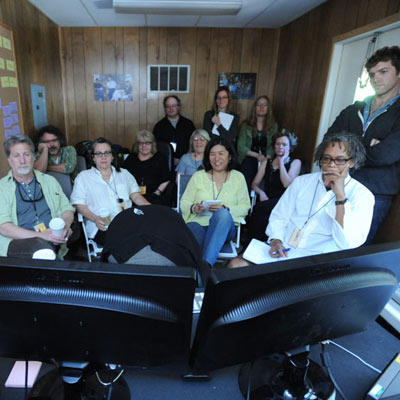 Los Angeles, CA — Sundance Institute today announced the selection of 24 Documentary Film Fellows representing nine film projects to participate in the 2012 Documentary Edit and Story Labs, June 22-30 and July 6-14 at Sundance Resort in Sundance, Utah. This year’s addition of a second Lab doubles the amount of documentary films and filmmakers the Institute is supporting in the post-production phase.

Keri Putnam, Executive Director of Sundance Institute, said, “Sundance Institute Labs provide a haven for filmmakers to work through challenges and take risks in their work with the support of our staff and Creative Advisors. We are encouraged that nearly every film team that has participated in a DFP Lab since 2006 has completed their film and launched it to audiences.”

“The Documentary Edit and Story Labs recreate the invited teams’ editing rooms and provide them with an Assistant Editor and support staff, allowing them to benefit from high-level, focused feedback sessions, and then implement changes through re-editing immediately,” said Cara Mertes, Director of the Sundance Institute Documentary Film Program and Fund. “We hear from filmmakers that participation in this Lab speeds up their process by at least three months and allows them to rediscover their original intentions as storytellers.”

The DFP celebrates its 10th anniversary in 2012 and since its inception has awarded grants to more than 425 documentary filmmakers in 61 countries.

The Genius of Marian (U.S.)
Directors: Banker White and Anna Fitch
Editor: Don Bernier
The Genius of Marian follows Pam White in the early stages of Alzheimer’s disease. Her son, the filmmaker, works with her as she attempts to write a book that tributes her mother, the renowned artist Marian Steele. As Pam’s family comes together to support her, they must also prepare for the new reality that Alzheimer’s disease brings.

Match +: Love in a Time of HIV (U.S.)
Directors: Ann Kim and Priya Desai
Editor: Bill Anderson
In India – a culture obsessed with marriage but where AIDS is an unspeakable disease – can you find love and companionship if you’re HIV-positive? Ancient tradition and the new reality of HIV collide. Match + is the modern love story that results.

Studio H (U.S.)
Director: Patrick Creadon
Producer: Christine O’Malley
Editor: Doug Blush
Studio H spends a year in the life of one of America’s most innovative classrooms. Designer/activists Emily Pilloton and Matt Miller, together with their high school students, unleash the power of humanitarian design to help their struggling community in North Carolina.

Gideon’s Army (U.S.)
Director: Dawn Porter
Editor: Matthew Hamachek
Gideon’s Army is the story of public interest lawyer Jonathan Rapping, his wife Ilham Askia, and the young lawyers they are training to provide quality criminal representation to poor people in the South. Facing long hours, low pay and a hostile court system, which will be able to go the distance?

God Loves Uganda (U.S.)
Director: Roger Ross Williams
Editors: Benjamin Gray and Richard Hankin
God Loves Uganda is a journey into the heart of East Africa, where Ugandan pastors and their American counterparts spread God’s word and evangelical values to millions desperate for a better life. Inspired by his own roots in the African American Baptist church, director Roger Ross Williams seeks to explore a place were religion and African culture intersect.