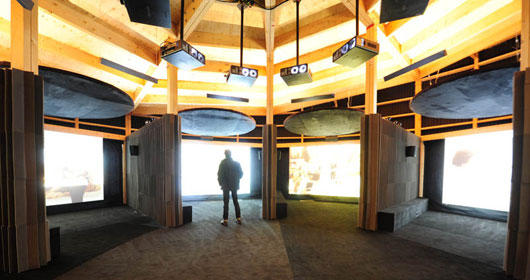 Los Angeles, CA — Sundance Institute today announced that the organization is deepening its commitment to its New Frontier program for artists innovating the art and form of storytelling, including the appointment of Shari Frilot and Kamal Sinclair as Co-Directors of the program.

New Frontier at Sundance Institute is a cross-programmatic initiative created to identify and foster independent artists working at the convergence of film, art, media, live performance, music and technology. Since 2007, the New Frontier exhibition at the Sundance Film Festival has provided the highest level of curation in the field, incorporating fiction, non-fiction and hybrid storytelling to showcase multi-media installations, performances and films. Sundance Institute established the New Frontier Story Lab in 2011 to deepen its support of storytellers pioneering new ways of working across various media and engaging with technology and in 2014 began the New Frontier Flash Lab and Artist Residency programs.

Robert Redford, President & Founder of Sundance Institute, said, “Artists continue to challenge us to immerse ourselves in new ways of experiencing stories. The Sundance Institute New Frontier program was created to discover, support and showcase those artists working at the forefront of this exciting new area.”

Keri Putnam, Executive Director of Sundance Institute, said, “New Frontier provides a unique and rich platform of support to artists who harness new technologies to develop interactive and immersive projects. Kamal and Shari will be instrumental in designing and implementing the future of our New Frontier program, allowing us to continue to evolve along with this dynamic field of storytelling.”

As Co-Directors, New Frontier, Frilot and Sinclair will collaborate on activities including cultivating and building relationships with artists and technologists, researching trends, and leading strategic planning and growth for the program.

Frilot will continue to curate New Frontier exhibition activities. A filmmaker, curator and festival programmer for events including MIX International Festivals and LA’s Outfest, she is presently in her 15th year as a Senior Programmer for the Sundance Film Festival. Frilot has been a pioneer in the development of immersive cinematic environments and the creative force behind New Frontier since its inception. She is an alumna of Harvard/Radcliffe University, and the Whitney Museum Independent Study Program.

Sinclair will oversee the annual New Frontier Story Lab, Flash Labs and Artist Residencies. She is a transmedia producer, theatrical director, community arts leader and multi-disciplinary artist. She served as artist and producer on the Question Bridge: Black Males collaborative transmedia art project and worked at 42 Entertainment on projects such as Legends of Alcatraz and Random Acts of Fusion. She graduated with her BFA from New York University’s Tisch School of the Arts and her MBA from Georgia State University’s Robinson College of Business.

Sundance Institute is a global nonprofit organization founded by Robert Redford in 1981. Through its artistic development programs for directors, screenwriters, producers, composers and playwrights, the Institute seeks to discover and support independent film and theatre artists from the United States and around the world, and to connect audiences to their work. The Institute promotes independent storytelling as art and as a compelling and powerful way to inform, inspire and unite people. Internationally recognized for its annual Sundance Film Festival, Sundance Institute has supported such projects as Beasts of the Southern Wild, Fruitvale Station, Sin Nombre, The Invisible War, The Square, Dirty Wars, Spring Awakening, A Gentleman’s Guide to Love and Murder and Fun Home. Join Sundance Institute on Facebook, Instagram, Twitter and YouTube.