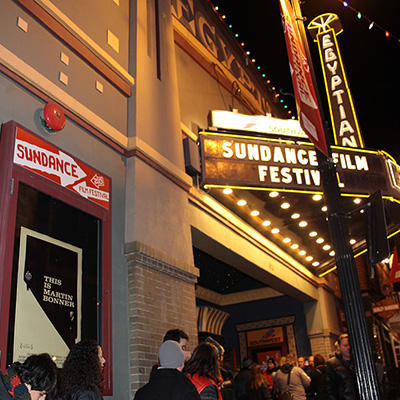 Park City, UT — Sundance Institute today announced that the 2013 Sundance Film Festival, which took place in Park City, Salt Lake City and Ogden, Utah in January, generated an overall economic impact of close to $70 million for the State of Utah, according to the independent annual economic and demographic study conducted by the University of Utah’s Bureau of Economic and Business Research at the David Eccles School of Business (BEBR).

The Economic Report, posted in full on the Sundance Institute website, also found that the 2013 Festival: supported over 1,407 jobs; generated over $56.8 million in international media exposure; provided nearly $5.8 million in tax revenue; and was attended by nearly 46,000 people. More than 65 percent of festival attendees traveled from outside of Utah, including nearly 4,000 visitors from international locations, and more than 40 percent of tourist attendees indicated that they intend to visit Utah again during the next year.

Laurie Hopkins Co-Managing Director of Sundance Institute, said, “Sundance Institute is proud to be a leading example of how investing in the arts can create jobs, boost tourism and support local businesses as well as provide a cultural experience for residents.   The more than $375 million in economic value that the Sundance Film Festival has brought to the state of Utah over the past five years demonstrates how the arts can support a local economy in a big way.”

“Utah is truly proud to be the official Sundance Film Festival host state. The Festival not only promotes tourism and educational opportunities for local schools, it provides consistent economic value annually,” said Governor Gary R. Herbert. “Our collaboration with Sundance Institute also allows a unique opportunity to network with worldwide business leaders and highlight Utah as a great place to do business.”

Sarah Pearce Co-Managing Director of Sundance Institute, said, “The Sundance Film Festival continues to be a collaborative community effort that showcases Utah to the world and promotes the best in independent film. We are pleased to work with so many local volunteers, vendors and partners to make this event a success and bring $70 million to the State of Utah.”

Over 13,000 Utah residents participated in 2013 Sundance Film Festival Utah Community programming. Notable events at the 2013 Festival included the annual Salt Lake Gala, attended by Governor Herbert, legislators and community leaders. In the Governor’s welcoming remarks, he commented on the value of hosting the Festival in Utah, as evidenced by its cultural and economic impact on the state. Sundance Film Festival offers two high school student screening programs that reached a combined 8000 students.  The programs bring together students and filmmakers for screenings and discussions on the art of storytelling and an array of social and cultural issues.  Over 500 Utah based non-profit and community leaders attended the Festival via the Institute’s complimentary Outreach Tickets. The Festival also welcomed Hill Air Force Base for a special screening at Ogden’s Egyptian Theatre. Upon the conclusion of the Festival, many Utah locals attended Best of Fest, free public screenings of the Festival’s award-winning films.

Building Audiences at Home and Abroad
Between the announcement of the film program in late November 2012 through wrap-up articles in February 2013, Sundance Institute and the 2013 Festival generated more than 31,100 print and online articles. From January 15 to February 15, 2013, the Festival generated 11,900 television pieces. In total, publicity value from the Festival totaled more than $56.8 million.

Sundance Institute’s social media and website content strategy continues to expand to reach new audiences across the world to inspire dialogue and raise awareness for independent film. The Institute’s website, Sundance.org, had unique visitors from 218 countries. Top countries outside the United States included the United Kingdom, Canada, France and Germany. In addition, the Festival now has over 1 million fans and followers across Facebook, Twitter, Instagram, Tumblr, Pinterest and Google+ platforms.

Economic Report Methodology
The Economic Report findings were generated using an economic impact model known as RIMS II, developed by the U.S. Department of Commerce’s Bureau of Economic Analysis. The economic impact study measures the impact of the Sundance Film Festival on jobs, wages, and value-added (or gross state product) on the state of Utah during a two-week period in January 2013. It also provides an estimate of the fiscal impacts that result from the increased economic activity generated by the Festival during the study period. Fiscal impacts refer to the effects of the Festival on state and local tax collections.

University of Utah Bureau of Economic and Business Research
Established in 1932, the Bureau of Economic and Business Research (BEBR) is an applied research center in the David Eccles School of Business at the University of Utah. BEBR’s mission is to conduct and support research related to the structure of the Utah economy, its resources, and its potential for expansion. Since its inception, BEBR has been a primary source of information on the Utah economy. BEBR’s professional staff gathers and analyzes data specific to both Utah and the Rocky Mountain Region to identify those factors which influence the state’s economic growth.

Sundance Institute®
Founded by Robert Redford in 1981, Sundance Institute is a global, nonprofit cultural organization dedicated to nurturing artistic expression in film and theater, and to supporting intercultural dialogue between artists and audiences. The Institute promotes independent storytelling to unite, inform and inspire, regardless of geo-political, social, religious or cultural differences. Internationally recognized for its annual Sundance Film Festival and its artistic development programs for directors, screenwriters, producers, film composers, playwrights and theatre artists, Sundance Institute has nurtured such projects as Born into Brothels, Trouble the Water, Son of Babylon, Amreeka, An Inconvenient Truth, Spring Awakening, Light in the Piazza and Angels in America. Join Sundance Institute on Facebook, Instagram, Twitter and YouTube.