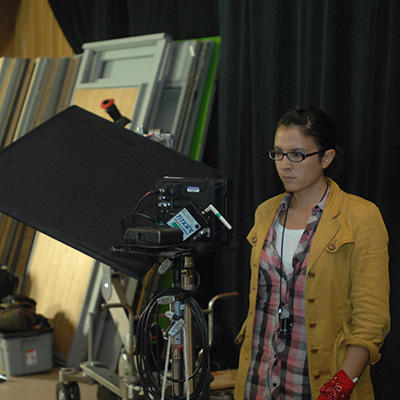 The event takes place during the Autry’s American Indian Arts Marketplace weekend, which attracts over 180 contemporary American Indian artists to Los Angeles. This is free and open to the public; guests are invited to attend a special catered reception with Freeland and Runningwater in the museum lobby following the program. Reservations are recommended; visit TheAutry.org to reserve tickets.

“Working with organizations in the community to promote Native arts through unique programming is vital to continuing the cultural narrative of Native Americans through the present and into the future,” said Diana Terrazas, the Autry’s American Indian Outreach Manager. “The Autry is pleased to partner with the Sundance Institute and UCLA’s American Indian Studies Center once again to showcase Native American film during our Marketplace weekend.”

“It has been a privilege to work with Sydney through Sundance Institute’s artist support programs,” said Runningwater. “We look forward to sharing and discussing her moving story of three Navajo teenagers who strive to escape the hardships of life on an Indian reservation and end up finding something different.“

About Sundance Institute
Founded by Robert Redford in 1981, Sundance Institute is a global, nonprofit cultural organization dedicated to nurturing artistic expression in film and theatre, and to supporting intercultural dialogue between artists and audiences. The Institute promotes independent storytelling to unite, inform, and inspire, regardless of geo-political, social, religious, or cultural differences. Internationally recognized for its annual Sundance Film Festival and its artistic development programs for directors, screenwriters, producers, film composers, playwrights, and theatre artists, Sundance Institute has nurtured such projects as Born Into Brothels, Trouble the Water, Beasts of the Southern Wild, Fruitvale Station, Sin Nombre, An Inconvenient Truth, Spring Awakening, Light in the Piazza, and Angels in America. Join Sundance Institute on Facebook, Instagram, Twitter and YouTube.

About the Autry National Center of the American West
The Autry is a museum dedicated to exploring and sharing the stories, experiences, and perceptions of the diverse peoples of the American West, connecting the past to the present to inspire our shared future. The museum presents a wide range of exhibitions and public programs—including lectures, film, theatre, festivals, family events, and music—and performs scholarship, research, and educational outreach. The Autry’s collection of more than 500,000 pieces of art and artifacts includes the Southwest Museum of the American Indian Collection, one of the largest and most significant in the United States.

Museum admission is $10 for adults, $6 for students and seniors 60+, $4 for children ages 3–12, and free for Autry members, veterans, and children age 2 and under. Admission is free on the second Tuesday of every month.

IMAGES ARE AVAILABLE ON REQUEST