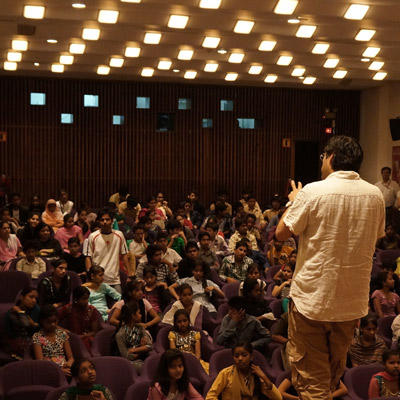 Los Angeles, CA — Sundance Institute and the President’s Committee on the Arts and Humanities announced today the program details for the third year of FILM FORWARD: Advancing Cultural Dialogue, an international touring program that offers film screenings, workshops and discussions with filmmakers. In eight locations across the U.S. and internationally, and in collaboration with local organizations, a program of eight independent films will be accompanied by workshops, filmmaker appearances and discussions.

FILM FORWARD uses the power of cinema to inspire curiosity, foster dialogue, promote broader cultural understanding and enhance awareness of shared stories and values across generations, language, education and borders. The program is an initiative of Sundance Institute and the President’s Committee on the Arts and Humanities in partnership with the National Endowment for the Arts, the National Endowment for the Humanities and the Institute of Museum and Library Services, in concert with U.S. Embassies and domestic presenting institutions.

The films selected for the third year of FILM FORWARD are: Beasts of the Southern Wild, by Benh Zeitlin; BONES BRIGADE: An Autobiography, by Stacy Peralta; Chasing Ice, by Jeff Orlowski; La Misma Luna (Under The Same Moon),by Patricia Riggen; The Light in her Eyes, by Julia Meltzer and Laura Nix; The Loving Story, by Nancy Buirski; Town of Runners, by Jerry Rothwell; and Valley of Saints,by Musa Syeed. Common themes explored in the films include issues surrounding family, friendship and community, as well as the intersection of tradition and modern culture. Film synopses and links to trailers are listed below.

Keri Putnam, Executive Director of Sundance Institute, said, “FILM FORWARD highlights film as a powerful medium for storytelling that brings people of different cultures, viewpoints, and backgrounds together in a shared dialogue. The first two years of FILM FORWARD connected films and filmmakers with audiences they might have never reached resulting in some remarkable and rich events; we look forward to building on these shared experiences in the third year of the program.”

Rachel Goslins, Executive Director of the President’s Committee on the Arts and the Humanities, said, “This program just gets better and better every year. The President’s Committee and the program’s federal partners, the National Endowment for the Arts, the National Endowment for the Humanities and the Institute of Museum and Library Services, are thrilled to once again bring the FILM FORWARD initiative to communities, both in the U.S. and around the world, who might not be otherwise exposed to these kinds of compelling stories and universal themes.”

Dates, venues, partners and program schedules for the third year of the initiative will be announced at www.sundance.org/filmforward at a later date.