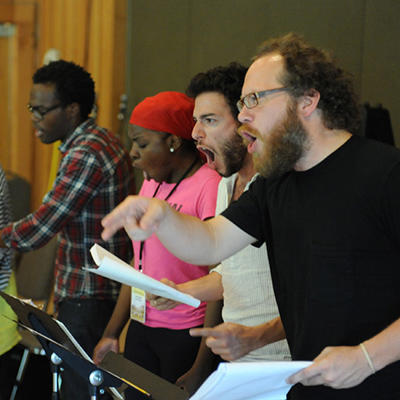 New York, NY — Sundance Institute today announced the three projects and two artists-in-residence that will participate in its two-week (December 1-15) Theatre Lab for musical theatre and ensemble-generated projects, taking place for the third time at the Massachusetts Museum of Contemporary Art (MASS MoCA). Under the supervision of Artistic Director Philip Himberg and Producing Director Christopher Hibma, the Lab is one of the Theatre Program’s five annual development opportunities for theatre artists around the world.

The projects and artists selected are:

First Daughter Suite
Words and music by Michael John LaChiusa
Directed by Kirsten Sanderson
First Daughter Suite is a part of a cycle of musical plays that are a fantasia based on historical characters and real events. First Daughter Suite explores the complex dynamic between mothers and daughters, as experienced by the women and children closest to the President of the United States. Patricia Nixon and her daughters, Tricia and Julie; Amy Carter and Susan Ford and their mothers, Rosalynn and Betty; Patti Davis and her mother, Nancy Reagan; and Barbara Bush and her daughter-in-law, Laura; all face obstacles and dilemmas that, in spite of the rarified environment of the White House and accompanying travails of the Presidency, are common to us all.

Madwoman in the Volvo
Written and performed by Sandra Tsing Loh
Directed by Lisa Peterson
Loh is developing a solo show based on her new memoir The Madwoman in the Volvo: My Year of Raging Hormones (May 2014, W.W. Norton). Inspired by her darkly hilarious 2012 Atlantic Monthly Best American Essay “The Bitch Is Back,” The Madwoman in the Volvo charts Loh’s roller-coaster ride into menopause while battling the pressures of the Sandwich Generation. Loh is a veteran public radio commentator who has previously starred in two original off-Broadway solo shows. Her last memoir was the New York Times notable book Mother on Fire.

Untitled Project
Fiasco Theater
Fiasco Theater will be developing a new play for the first time in its history. Having brought its acclaimed actor-driven, stripped-down, physically robust, musically enhanced style to the interpretation of classics (Cymbeline, Into the Woods), Fiasco will now turn its creative energy to the exploration of a new piece. The ensemble will bring years of exciting collaboration and process building to this experiment in making new work. Participants will include Fiasco company members Jessie Austrian, Noah Brody, Paul L. Coffey, Ben Steinfeld and Emily Young.

Artists-in-Residence
Byron Au Yong & Aaron Jafferis, Fellows of Sundance Institute’s Time Warner Fellowship Program Composer Au Yong & librettist Jafferis will be working on Trigger, a theatrical oratorio for 32 college singers, that delves into mental health and violence in America prompted by the Virginia Tech Massacre. Trigger is the second in a trilogy of music theatre works about what Americans fear. Asian men who receive media blitzes in America inform the circumstances for each show. The trilogy includes the Sundance Institute-supported project Stuck Elevator (fear of being trapped), Trigger (fear of being shot) and Fallout (fear of being gay).

Sundance Institute Theatre Program
The Theatre Program has been a core component of Sundance Institute since Robert Redford founded the Institute in 1981. The Theatre Program identifies and assists emerging theatre artists, contributes to the creative growth of established artists, and encourages and supports the development of new work for the stage. Under the guidance of Artistic Director Philip Himberg and Producing Director Christopher Hibma, the Theatre Program is one of the leading play development programs in the United States. Titles such as Spring Awakening, An Iliad, I Am My Own Wife, The Good Negro, Circle Mirror Transformation, Passing Strange, Grey Gardens, Crowns and Marie Antoinette have gone from Theatre Program Labs to production from coast to coast and internationally, garnering multiple Pulitzers, Tonys, OBIEs and other recognition. The Theatre Program’s East Africa initiative is the only professional program of its type on the continent, offering Labs, cross-cultural exchange, mentorship and exposure to artists in six African countries. The Theatre Program’s newest initiative is the Theatre Directors Retreat at Domaine de l’Armellière in Arles, France. www.sundance.org/theatre