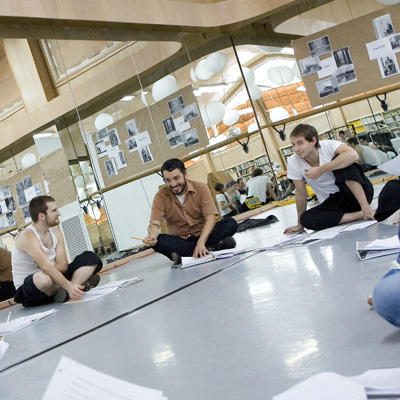 New York, NY — The Sundance Institute Theatre Program today announced the three projects selected for its 2012 Theatre Lab at White Oak in Yulee, Florida. The Lab provides creative support and direction for innovative musical theatre projects and ensemble-generated projects, which have unique needs for collaboration and rehearsal time. Under the supervision of Philip Himberg, Producing Artistic Director of the Theatre Program, and Associate Director Christopher Hibma, the two week Lab (October 30 – November 13, 2011) is produced in partnership with the Howard Gilman Foundation.

“The projects selected further demonstrate the Institute’s commitment to providing ongoing support for artists and projects,” remarked Himberg. “Stuck Elevator and Untitled World’s Fair Play participated in our most recent Theatre Lab at The Banff Centre, and our artists-in-residence are also returning alumni – Ms. Tesori was a composer Fellow at the charter Sundance Institute Playwrights Retreat at Ucross Foundation in Wyoming, and Ms. Kron workshopped both Well and In The Wake at previous Labs.”

Himberg continued, “I was deeply moved by Byron Au Yong’s score and Aaron Jafferis’ distinctive vision for Stuck Elevator, a music theatre piece that vigorously explodes the story of a lone food delivery man into a narrative reflection of our modern world, and The Debate Society has emerged as one of New York’s most original and compelling creators of devised story-telling.”

In response to the changing needs of the field, the Theatre Program hosts a range of creative Labs throughout the year and around the world, including a Theatre Lab at the Sundance Resort, Playwrights Retreat at Ucross Foundation, and Sundance Institute East Africa. Past activities have also included a Theatre Lab at MASS MoCA and a Theatre Lab on Governors Island in New York.

“We recognize that work on stage comes in many different forms, each with a unique creative process, and our Theatre Program is responsive to that need by offering a range of Labs for artists,” said Keri Putnam, Executive Director of Sundance Institute. “Our Theatre Lab at White Oak adds to that range by providing musicals and ensemble-generated projects with the best resource for success – a focused, collaborative time to bring their ideas to life.”

The projects selected for the 2012 Theatre Lab at White Oak are:

Based on the true story of an undocumented immigrant who survived 81 hours in a Bronx elevator, this comic-rap-scrap-metal-music-theatre work follows Guang’s increasingly fantastic attempts to escape a 4′ x 6′ x 8′ metal box. As he climbs into memories, nightmares, and impossible futures, he is cooked into a morsel of Orange Beef and mugged by a bursting bladder. Taking charge, Guang transforms into Takeout Man, battles his prison guard, flies paper airplane menu letters to his family, and leads an army of bicycle deliverymen. Suspended between the upward mobility of the American dream and the downward plunge into an empty abyss, Stuck Elevator travels between refuge/prison, freedom/safety, and voice/silence for our superhero. The text will be in Mandarin and English.

Chicago 1893: The Zoopraxiscope, cracker jacks and neon lights. The Ferris Wheel, hootchy-kootchy… hell they even had the hamburger! On the eve of a glowing new century, something terrible happens in a humble two-story home. And everything ends. Chicago 1933: When The Fair returns 40 years later, so do the unfinished histories of everything that could have been. And so things begin for the hermit upstairs and the mysterious look-a-like below. Play-making company The Debate Society creates a haunted world of forgotten futures, a rotting building and the spirit of invention.

“My father and I grew up in the same small Pennsylvania town and he was gay and I was gay and he killed himself and I became a lesbian cartoonist.” Fun Home is Jeanine Tesori and Lisa Kron’s musical adaptation of the acclaimed graphic novel by Alison Bechdel. The title refers to the family business, the Bechdel Funeral Home, and charts Alison’s quest to come to terms with her father’s life and death by painstakingly reconstructing their shared but unspoken bond.