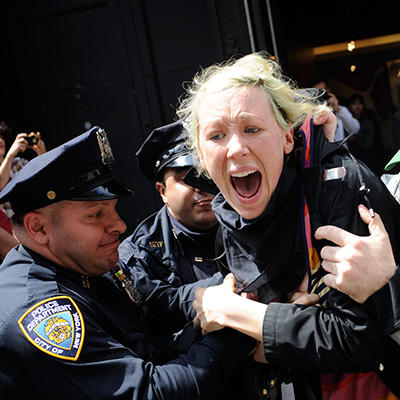 Los Angeles, CA — Sundance Institute today announced the 25 feature-length documentary films that will receive $550,000 in grants from its Documentary Film Program and Fund (DFP). Grantees were selected from 696 submissions from 104 countries.

Cara Mertes, Director of the Sundance Institute Documentary Film Program and Fund said, “As we enter a new cycle for political leadership in the U.S. and abroad, documentary filmmakers continue to seek out stories that elucidate the conditions of our lives. Their reach is global, and their stories connect and inspire a new generation of independent documentary filmmakers and audiences.”

Granted filmmakers reflect a range of experience, including five first-time feature filmmakers as well as noted documentarians Fred Wiseman, Sam Pollard and Jehane Noujaim. In-country filmmakers include those in Africa (Ghana), India and China, and additional countries of production include Afghanistan, Nepal, Senegal and Egypt.

Awarding grants is a core activity of the DFP, which provides year-round creative support and funding to nonfiction filmmakers globally. Proposals are accepted twice a year, and submissions are reviewed by a jury of creative film professionals and human rights experts, based on their approach to storytelling, artistic treatment and innovation, subject relevance and potential for social engagement. Submissions for the next round will be accepted beginning in late December, with a February 5 deadline. More information at www.sundance.org/documentary.

The DFP celebrates its 10th anniversary in 2012 and since its inception has awarded grants to more than 450 documentary filmmakers in 62 countries, including the projects announced today.

Boomtown (U.S.)
Director: Beth Murphy
A modern day Grapes of Wrath story is playing out across America as families pack their bags and head to North Dakota in search of the American Dream.

Bukom Fighter (Ghana)
Director: Makafui Zimrani
A nine year old boy from a shanty town in Ghana tries to create hope for himself using the only resource at his disposal; the power of his fists.

Perry vs. Schwarzenegger (U.S.)
Directors: Ryan White and Ben Cotner
In 2013, the U.S. Supreme Court will hear a case that challenges California’s ban on same-sex marriage. Perry v. Schwarzenegger, filed by two couples with an unlikely legal team, has now reached the nation’s highest court and is poised to be the first ruling on the right of gay and lesbian Americans to marry.

Rise and Fall of ACORN (U.S.)
Directors: Reuben Atlas and Sam Pollard
In 2009 a national community-organizing group was destroyed. The complex story of ACORN involves a journalist posing as a pimp, embezzlement, and voter fraud.

After Tiller (U.S.)
Directors: Martha Shane and Lana Wilson
Since the assassination of Dr. George Tiller in 2009, only four doctors in the country provide late-term abortions. With unprecedented access, After Tiller goes inside the lives of these physicians working at the center of the storm.

At Berkeley (U.S.)
Director: Frederick Wiseman
A world renowned, public university strives to maintain its academic excellence, public role, and the economic, racial and social diversity of the student body in the face of severe budget cuts by the California Legislature.

A Blind Eye (U.S. / Afghanistan)
Director: Kirsten Johnson
A one-eyed boy struggles to hide what really haunts him. A bold teenage girl defies convention, out running her nightmares of the Taliban, but still too afraid to show her face in a film. A U.S. Military surveillance blimp in the sky over Kabul tracks their every move.

The Faun Experiment (U.S.)
Directors: Tamar Rogoff and Daisy Wright
He expected to be in a wheelchair by age 40 with cerebral palsy. Instead, Gregg Mozgala embarks on a dance project with choreographer Tamar Rogoff. As art overturns science his life is forever changed.

The Girl Who Knew Too Much (U.S. / Nepal)
Directors: Amy Benson and Scott Squire, Co-Director: Ramyata Limbu
Shanta is an Untouchable Nepali girl with a rare opportunity to break her family’s cycle of poverty, through education. But, a year from graduation, Shanta falls victim to globalization’s new epidemic: suicide.

The Kill Team (U.S.)
Director: Dan Krauss
An American soldier attempts to expose U.S. war crimes even more heinous than Abu Ghraib and then is himself charged with premeditated murder.

Powerless (India)
Directors: Fahad Mustafa and Deepti Kakkar
In a city with 15-hour power outages, a nimble young electrician provides robin-hood style services to the poor. Meanwhile, the first female chief of the electricity supply company is on a mission to dismantle the illegal connections, for good.

Provenance (U.S.)
Director: Amie Siegel
Artist and filmmaker Amie Siegel traces the journey of Le Corbusier and P. Jeanneret designs in reverse — the economic circuit and life of objects, revealed across three continents. Without interviews, actors or voice-over, these coveted items are the protagonists of this story.

Regarding Susan Sontag (U.S.)
Director: Nancy Kates
The late writer, activist and public intellectual Susan Sontag was a study in contrasts; a courageous public figure who remained a closeted lesbian. The film examines her contributions to culture and her views, as a thinker and activist, on war, terrorism, torture and other contemporary issues.

Running in the City (China)
Director: FAN Jian
More than 240 million migrant workers who labor inside China aren’t acknowledged as urban residents due to China’s household registration policy. This is a story of one family’s rebellion.

The Shadow World (U.S. / Belgium)
Director: Johan Grimonprez
This feature documentary explores the international arms industry: a business in which wins and losses are counted in human lives.

The Square (Egypt / U.S.)
Director: Jehane Noujaim
What does it mean to risk your life for your ideals? How far will five revolutionaries go in defending their beliefs in the fight for their nation?

Solarize This (U.S.)
Director: Shalini Kantayya
In a city where oil spills, ecological red-alerts, and poverty are commonplace, Solarize This asks the hard questions of how a clean energy economy may actually be built, through the stories of three unemployed American workers seeking to retool at a solar power jobs training program in Richmond, California.

Uranium Drive-In (U.S.)
Director: Suzan Beraza
A proposed uranium mill gives an economically devastated mining community in Colorado hope of jobs for the first time in decades. When environmentalists step in to stop the uranium, pro-mill advocates are enraged. Is uranium worth it?

Dear Mandela (South Africa / U.S.)
Directors: Dara Kell and Christopher Nizza
When their shantytowns are threatened with mass eviction, three ‘young lions’ of South Africa’s new generation rise from the shacks and build a strong social movement to challenge their government in the highest court in the land, putting the promises of democracy to the test.

The Audience Engagement Award for Dear Mandela will support strategic exchanges between international human rights defenders, diplomats and law students poised to take action on the issues of evictions and housing rights, and a screening tour featuring a youth leadership initiative for shantytown dwellers in affected countries including Haiti, Zimbabwe, Nigeria, India and Brazil.

Founded by Robert Redford in 1981, Sundance Institute is a global, nonprofit cultural organization dedicated to nurturing artistic expression in film and theater, and to supporting intercultural dialogue between artists and audiences. The Institute promotes independent storytelling to unite, inform and inspire, regardless of geo-political, social, religious or cultural differences. Internationally recognized for its annual Sundance Film Festival and its artistic development programs for directors, screenwriters, producers, film composers, playwrights and theatre artists, Sundance Institute has nurtured such projects as Born into Brothels, Trouble the Water, Beasts of the Southern Wild, Amreeka, An Inconvenient Truth, Spring Awakening, Light in the Piazza and Angels in America. Join Sundance Institute on Facebook, Twitter and YouTube.