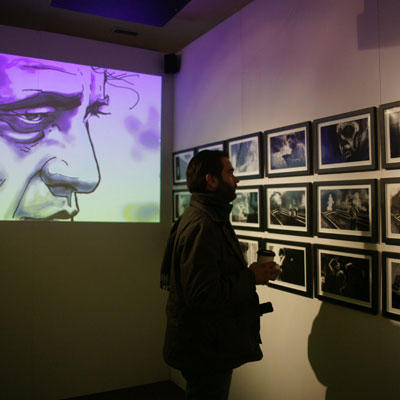 The New Frontier Story Lab will focus on supporting projects that have original stories and engage audiences in innovative ways, across multiple platforms. Organized as an immersive lab experience, activities will include individualized story sessions, conversations about key artistic, design and technology issues, and case study presentations. Drawing talent and expertise from all of Sundance Institute’s creative programs, including Feature Film, Documentary Film, and the Sundance Film Festival, the Lab has been planned under the supervision of Michelle Satter, Director of the Sundance Institute Feature Film Program.

“Over the past few years, new forms of storytelling have emerged and already proven the potential to engage audiences in creative and innovative ways,” said Satter. “We created the New Frontier Story Lab to support visionary artists developing projects that will change the way we experience stories in the future. We are thrilled to include such an exciting group of projects in our inaugural Lab.”

“The New Frontier Story Lab is an exciting expansion of our work to a new and important field where we felt independent voices needed nurturing and resources,” said Keri Putnam, Executive Director of Sundance Institute. “This new Lab is building upon the already-established legacy of the New Frontier program at the Sundance Film Festival, celebrating its fifth anniversary this year, which was an early supporter of work that extends beyond the big screen.”

The Coca-Cola Company and their long-time agency partner McCann will support Sundance Institute as the inaugural underwriter of the New Frontier Story Lab. Coca-Cola and McCann have long understood the value of story and how new technologies are vital to creating and sharing these stories. Through the collaboration, Coca-Cola and McCann will explore developing content using the same principles that drive the New Frontier initiative.

The artist teams and projects selected for the New Frontier Story Lab are:

18 Days in Egypt is a interactive documentary project that will tell the story of the first 18 days of the Egyptian revolution through the media (videos, photos, tweets and other electronic media) generated by those there. The context for the contributed media will be crowdsourced by the project’s community.

Jigar Mehta (Producer/Co-Creator) just completed a John S. Knight Fellowship at Stanford University where he was developing tools for collaborative journalism. Before coming to Stanford, he worked as a video journalist for The New York Times. Mehta received his Masters in Journalism in 2005 from the Graduate School of Journalism at UC Berkeley where he studied under documentary filmmaker Jon Else.

Yasmin Elayat (Technologist/Co-Creator) is an interaction designer and software developer based in Cairo.  She studied Computer Science at the American University in Cairo, then pursued a masters degree from the Interactive Telecommunications program at New York University, merging her interests in arts and technology.

When Jane stumbles upon her estranged father’s Facebook page,  she and her boyfriend Mark decide to embark on a road trip to anonymously catch a glimpse of  her father and his new family. During this fictional,  interactive experience, “Jane” and “Mark” will share their journey in real-time via social media, eventually culminating in a feature film that explores the modern dilemma of having your past be ever present.

Brigitte Dale (Writer/Director) is a writer, director and actress who began her entertainment career in Lincoln, Nebraska as a writer and video blogger for AOL and ABC Family. Since moving to Los Angeles she has produced, written, and starred in content for NatureMade Vitamins, Samsung, Ford, Disney, NASA, Comedy Central, MTV, and Lee Enterprises.

Robbie Wilkins (Creative Director/Producer) was a resident artist and member of the first Collaborative Documentary Fellowship at UnionDocs. His work has been commissioned by NPR and has aired extensively on MTV. Wilkins’ creative projects have also screened at the MoMA, Harvard’s Carpenter Center for Visual Arts, DCTV in New York, and Direcktorenhaus in Berlin.

In a world where Shakespeare’s characters struggle for freedom, Hamlet struggles to rally a group of the Bard’s greatest heroes to battle the evil forces of Shakespeare’s most frightening villains. Based on the comic series by Del Col & McCreery, Kill Shakespeare is being developed as a feature film, a game, and a theatre experience.

Anthony Del Col (Co-Creator) is a creative entrepreneur with a wide range of experience in the music, film television and publishing industries.  He is the co-creator and co-writer of Kill Shakespeare, the acclaimed comic book series that has been profiled by the New York Times, Washington Post, Publisher’s Weekly, BBC and CBC. Along with co-creator Conor McCreery, Del Col has been nominated for a Shuster Award for Outstanding Comic Book Writing.

Conor McCreery (Co-Creator) has served in both creative and business positions for film and television companies, contributed over one thousand stories and articles for media outlets such as the Globe and Mail, Wired.com, and The Grid. He is the co-creator and co-writer of Kill Shakespeare, which has been nominated for a Harvey Award for Best New Series.

The failed nation-state of Somalia has become one of the poorest and most dangerous countries on earth. With their traditional fishing livelihoods blighted by drought, chronic corruption, and the pillaging of their seas by foreign vessels, Somalia has become a breeding ground for hijacking and extortion by a new band of sea rovers. The Last Hijack is a feature documentary and interactive online experience that uses film and animation to tell the story of these men that took matters into their own hands, landing million dollar bounties with each heist.

Tommy Pallotta (Co-Director) is a visionary storyteller whose penchant for innovation was recognized by Microsoft Research and Development where he lead a research team to create and design interactive, animated storytelling experiences. His short film, Snack and Drink, is part of a permanent collection in the New York Museum of Modern Art. Pallotta has collaborated with Richard Linklater on the award-winning feature film Waking Life and A Scanner Darkly, animating both films using proprietary software and a technique he co-developed. His latest project is the Emmy-nominated transmedia thriller, Collapsus.

Femke Wolting (Co-Director) is Executive Director of Holland’s leading transmedia production outfit, Submarine, which she co-founded with Bruno Felix in 2000. Wolting has produced several projects including Peter Greenaway’s feature film Rembrandt’s J’accuse, documentary Another Perfect World, internationally-distributed animation series Kika & Bob, and the Emmy-nominated Collapsus. She has also directed a number of award-winning projects for VPRO, including Sneakers and It’s the End of TV As We Know It.

Chris Johnson (Co-Director) is a producer, fine art photographer and author. His photography has been widely exhibited and published and is in the collections of the San Francisco Museum of Modern Art, the Smithsonian Institution, the Oakland Museum, and the Center For Creative Photography, Tucson, AZ.  Johnson is a full Professor of Photography at the California College of the Arts where for ten years he served as President of the Faculty Senate.

Hank Willis Thomas (Co-Director) is a photo conceptual artist working primarily with themes related to identity, history and popular culture. His work is in numerous public collections including The Museum of Modern Art, The Whitney Museum of American Art, the Brooklyn Museum, The High Museum of Art in Atlanta and the Museum of Fine Art in Houston. Thomas is currently a Fellow at the W.E.B. Dubois Institute at Harvard University and an artist-in-residence at Cité Internationale des Arts in Paris, France.

Originally a concept album for a film that does not (yet) exist, Rome is a multiplatform interactive narrative experience inspired by the music produced by Danger Mouse and Daniele Luppi (featuring Jack White, Norah Jones, and Ennio Morricone’s original 40 piece orchestra from Italy). The project will culminate in a feature film produced by Likely Story and Annapurna Pictures and adapted from the novel “The Reapers are the Angels” which will tie all the threads together in one cohesive narrative.

Chris Milk (Director) is an artist focused on advancing technology generated emotional resonance through innovative interactive video projects. Milk’s work has garnered both viral status as well as a host of traditional accolades, including “Best of Show” awards at the Cannes Lions, D&ADs Pencils, The Clios, and SXSW, as well as multiple Grammy® nominations, MTV Moon Men, and the UK’s MVA Innovation Award. In 2011 he was honored in The Smithsonian’s Cooper-Hewitt Nation Design Awards, and his “Wilderness Downtown” piece is currently on display at the MoMA in New York.

The Sundance Institute Feature Film Program
Since 1981, the Sundance Institute Feature Film Program (FFP) has supported more than 450 independent filmmakers whose distinctive, singular work has engaged audiences worldwide.  The program’s approach to the discovery and development of independent artists has become a model for creative development programs internationally. Program staff fully embrace the unique vision of each filmmaker, encouraging a rigorous creative process with a focus on original and deeply personal storytelling. Each year, up to 30 emerging artists from the U.S. and around the world participate in a year-round continuum of support which can include the Screenwriters and Directors Labs, Creative Producing Fellowship and Lab, Composers Lab, Creative Producing Summit, ongoing creative and strategic advice, significant production and postproduction resources, a Rough-Cut Screening Initiative, a Screenplay Reading Series, and direct financial support through project-specific grants and artist fellowships. In many cases, the Institute has helped the Program’s fellows attach producers and talent, secure financing, and assemble other significant resources to move their projects toward production and presentation. In addition, the FFP is providing strategic resources to completed Lab films in distribution and marketing across all platforms to support and expand their connection to audiences worldwide.