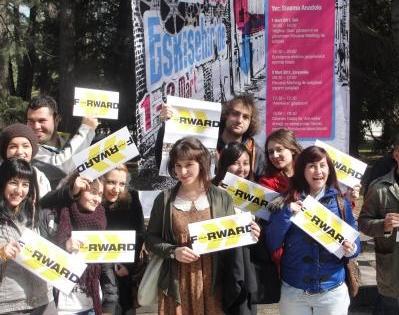 Mumbai, India — Sundance Institute announced today that FILM FORWARD: Advancing Cultural Dialogue, a program that promotes cultural dialogue through independent documentary and narrative film, is travelling from March 15 to 22, 2012 to five locations in India: Mumbai, New Delhi, Aligarh, Gurgaon and Noida. Mumbai Mantra Media Ltd and the American Center in New Delhi, in collaboration with Taj Enlighten Film Society and Whistling Woods International, will present the FILM FORWARD program which includes 10 films, filmmaker appearances and workshops at multiple venues in the five cities.  All FILM FORWARD screenings are free of charge for University students and the general public.

FILM FORWARD is an initiative of Sundance Institute and the President’s Committee on the Arts and the Humanities in partnership with the National Endowment for the Arts, the National Endowment for the Humanities, and the Institute of Museum and Library Services.  A full schedule of FILM FORWARD screenings and events in India along with a complete list of outreach partners is available at http://www.sundance.org/filmforward/destination/india-2012/.

“It is exciting to expand our relationships with the vibrant community in India as we mount this multi faceted cinematic program,” said Keri Putnam, Executive Director of Sundance Institute. “Together with our FILM FORWARD collaborators at Mumbai Mantra and the American Center in New Delhi, we hope to continue building cultural bridges which encourage discourse, the creation of new ideas and a meaningful cross-cultural dialogue.”

Filmmakers Asif Kapadia (Senna) and Linda Goldstein Knowlton (Somewhere Between) will be in attendance to participate in Q&As, discussions, workshops and meet-and-greet events with the different communities in the select destinations in India (complete schedule attached).

The films participating in the FILM FORWARD program represent a powerful exploration of universal themes that provide an avenue for greater cultural understanding. All 10 films collectively illustrate coming-of-age stories, explore identity and reveal the transformation process, both political and personal. Somewhere Between follows the story of four Chinese-American girls struggling with their Identity as they grow into young women, and Senna follows the life of legendary Formula One driver, Ayrton Senna who became a national treasure and symbol of success for Brazil. On the Ice navigates the rocky landscape of adolescence; The Green Wave depicts the challenges and resourcefulness of a country and people in conflict; Beginners explores the relationship between father and son and the endurance of love; Unfinished Spaces shows the collision between art and politics; Grbavica reveals the scars of war as a mother and daughter struggle through post-war Sarajevo and ultimately the strength of family; Bran Nue Dae is a musical coming of age story told from the Australian outback; Buck, the story of Buck Brannaman and his extraordinary work with horses, and Another Earth about the lives of two strangers whose lives become intertwined after the discovery of a duplicate Earth

A total of 10 films and filmmakers from the U.S. and abroad were selected by Sundance Institute and the partners to participate in the 2012 FILM FORWARD program, traveling to four domestic and five international locations. Filmmakers participate in screenings, extended Q&As, workshops, and master classes at Universities, film and cultural centers, museums, libraries and other community, educational, and cultural venues cultivating engaged dialogue, fostering appreciation of other viewpoints, and developing new audiences for independent film.

Another Earth / USA (Director: Mike Cahill) — After the discovery of a duplicate Earth, tragedy strikes, and the lives of these strangers become irrevocably intertwined.  When one of them is presented with the opportunity to travel to the other Earth and embrace an alternative reality, which new life will they choose?  Cast: Brit Marling (also a co-writer), William Mapother, Matthew-Lee Erlbach

Beginners / USA  (Director: Mike Mills) — BEGINNERS imaginatively explores the hilarity, confusion, and surprises of love through the evolving consciousness of Oliver, whose life is rocked by two announcements from his elderly father: that he has terminal cancer, and that he has a young male lover. Cast: Ewan McGregor, Christopher Plummer, Melanie Laurent

Bran Nue Dae / Australia (Director: Rachel Perkins) — This musical, set in the Summer of 1969, tells the story of a young man who flees the Catholic mission where he is studying to join the priesthood.  He journeys across Australia on a life-changing journey that ultimately leads him back home.  Cast: Rocky McKenzie, Jessica Mauboy, Geoffrey Rush

Buck / USA (Director: Cindy Meehl) — BUCK profiles famous “horse whisperer” Buck Brannaman, tracing his life from an abusive childhood to his career as a world-renowned horse handler and trainer. By teaching people to communicate with horses through instinct, not punishment, he frees the spirit of the horse and its human comrade.

Grbavica / Bosnia and Herzegovina (Director: Jasmila Zbanic) — GRBAVICA explores the painful long-term effects of war on a Bosnian woman and her daughter as they struggle to make a life in post-war Sarajevo.  Removing the veil from the ultimate taboo of the war in the Balkans, the use of rape as a weapon, the film reveals that the post-war denial of this war crime is as devastating as the crime itself.  Cast: Mirjana Karanovic, Luna Mijovic, Leon Lucev.

The Green Wave / Germany (Director: Ali Samadi Ahadi) — Ali Samadi Ahadi’s timely documentary reveals how Iranian civilians reacted to the 2009 Iranian Presidential elections.  Using actual footage of the protests as well as interviews with Iranian bloggers and political leaders, Ahadi paints a compelling portrait of a nation on the brink of revolution.

On the Ice / USA (Director: Andrew Okpeaha MacLean) — Two Alaskan teenagers deal with guilt and a web of deceit after accidentally killing a friend in a fight that got out of control. With their future in the balance, the two boys are forced to explore the limits of friendship and honor. Cast: Frank Irelan, Adamina Kerr, John Miller

Senna / UK (Director: Asif Kapadia) —The story of Ayrton Senna, perhaps the greatest race car driver who ever lived, is an epic tale that literally twists at every turn. Facing titanic struggles, he conquered Formula One and became a global icon who was idolized in his home country.

Somewhere Between / USA (Director: Linda Goldstein Knowlton) – Somewhere Between tells the story of four teenaged girls adjusting to life in the US after their Chinese birth parents are forced to part with them due to China’s “One-Child” policy.  The film provides an intimate look into the lives of teenage adoptees as they come to terms with their unique identities.

Mumbai Mantra Media Ltd, the Media & Entertainment vertical of the Mahindra Group, is actively evaluating opportunities in content and infrastructure in the domestic as well as international media and entertainment space. Mumbai Mantra’s ‘Antaheen’, won 4 National Awards including Best Feature Film in 2009. It has also co-produced the film adaptation of Shakespeare’s ‘The Tempest‘ directed by Julie Taymor. Several other films are in development.

Mumbai Mantra has also made a commitment towards providing a platform for independent voices in Indian cinema to champion an emerging generation of exciting film makers. The first step in this direction is the forging of a partnership with the renowned Sundance Institute founded by Robert Redford, for the establishment of the Mumbai Mantra | Sundance Institute Screenwriters Lab which is planned to be an annual event in India, and the Sundance Institute | Mahindra Global Filmmaking Award to be awarded to 4 international film makers annually. www.mumbaimantra.com

The U.S. Embassy in New Delhi is one of the largest U.S. diplomatic missions in the world, a reflection of the importance the United States places on its relationship with India. The Embassy represents 17 U.S. federal government agencies, from the U.S. Department of State to the Federal Aviation Administration. The Embassy coordinates the activities of four consulates — in Mumbai, Kolkata, Chennai and Hyderabad – ensuring that the U.S.-India relationship is strong throughout the country. The Embassy also maintains a Virtual Consulate through its web site serving residents of Bangalore.

FILM FORWARD: Advancing Cultural Dialogue is an international cultural exchange program designed to enhance cross-cultural understanding, collaboration and dialogue around the globe by engaging audiences through the exhibition of film and conversation with filmmakers. FILM FORWARD is an Initiative of Sundance Institute and The President’s Committee on the Arts and the Humanities, in partnership with the National Endowment for the Arts, the National Endowment for the Humanities, and the Institute of Museum and Library Services.

The Institute of Museum and Library Services (IMLS) is an independent federal grant-making agency dedicated to creating strong libraries and museums that connect people to information and ideas. The IMLS works at the national level and in coordination with state and local organizations to sustain heritage, culture, and knowledge; enhance learning and innovation; and support professional development.

1:30pm:  SOMEWHERE BETWEEN and Q&A with Linda Goldstein Knowlton

9am-4pm: GRBAVICA, THE GREEN WAVE, ON THE ICE, UNFINISHED SPACES

7pm : Screening SOMEWHERE BETWEEN with Q&A

9:30am: SOMEWHERE BETWEEN with Q&A

2:30pm: SOMEWHERE BETWEEN with Q&A

11am: SOMEWHERE BETWEEN with Q&A

7:30pm: SOMEWHERE BETWEEN with Q&A