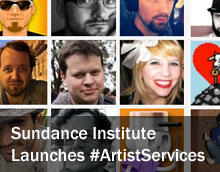 Los Angeles, CA (July 27, 2011) — Keri Putnam, Executive Director of the non-profit Sundance Institute, today announced an expansion of the Institute’s Artist Services program, which provides opportunities for Sundance Institute artists to reach audiences, raise funding and receive support through a robust educational and resources site. While the Sundance Film Festival has long offered a platform for films to be acquired for distribution, the expansion of this initiative aims to provide opportunities for the many projects that are distributed independently.

Through the program, filmmakers can now make their films available online to consumer markets via iTunes, Amazon, Hulu, Netflix, SundanceNOW, and YouTube while still retaining ownership of their work and making independent decisions about strategies for each outlet. Each partner is highly regarded for its visibility, reach, strong and reliable security protections, and social media connectivity. They will identify and promote these film projects to their audiences, while in turn, the Institute will endorse their availability through its own marketing and promotional efforts and through the vast social community developed over the course of the Institute’s 30-year history.

New Video, the Institute’s exclusive aggregation partner for distribution across these portals, will offer all eligible Sundance Film Festival and Lab titles a unique gateway to digital distribution that emphasizes filmmaker ownership and control, with the benefit of New Video’s 20 years of marketing and sales expertise.

In addition, the Institute has also entered into a deal with Topspin Media to provide its artists with direct marketing tools and fulfillment services. Topspin is a direct marketing and retail software platform for musicians, filmmakers and authors that provides tools for independent artists to increase awareness of their work and build relationships with fans.

Among the first films and filmmakers to use these services will be two selections from the 2011 Sundance Film Festival: Connected: An Autoblogography about Love, Death & Technology by director Tiffany Shlain, which premiered in the U.S. Documentary Competition section and On the Ice, by director Andrew Okpeaha MacLean, which premiered in the U.S. Narrative Competition section. In addition, the filmmakers of Jess + Moss, Lord Byron, New Low, Obselidia, The Oregonian, Space Tourists, and The Woods are also embarking on independent, creative release strategies that will take advantage of the initiative’s offerings. Details on the availability of each film to the public will be announced.

“When I founded the Institute in 1981, it was at a time when a few studios ran the industry and an artist’s biggest concern was whether their film would get made,” said Robert Redford, Founder and President of the Institute. “Technology has lessened that burden, but the big challenge today is how audiences can see these films. The Artist Services program is a direct response to that need. We’re not in the distribution business; we’re in the business of helping independent voices be heard.”

The first phase of the program, announced in January at the 2011 Sundance Film Festival, featured a collaboration with Kickstarter for filmmakers to build creative funding campaigns for production and distribution costs. As of July 2011, dozens of projects from Institute-supported filmmakers have raised more than $650,000 via Kickstarter. Also announced in January and continuing is a relationship with Facebook®, which offers Institute alumni advice, educational materials and best-practices tips on how to build and engage audiences via the service.

“By acting as a conduit between filmmaker and distributor, we are presenting an alternative to traditional distribution while building knowledge about online distribution strategies that will benefit the broader field of independent film,” said Putnam. “We’ve worked with these leaders in online distribution to make it easier for filmmakers to present their work to the widest audiences possible.”

The Artist Services program furthers the Institute’s non-profit mission to support independent artists, and is designed for filmmakers interested in independent “creative distribution” as they navigate the evolving landscape in film distribution, marketing and financing. With unparalleled recognition worldwide, the nonprofit Sundance Institute is in a unique position to bring together a wide range of services and lend invaluable promotional support for artists.

The Sundance Institute Artist Services initiative is made possible by The Bertha Foundation. O’Melveny & Myers generously provided pro bono legal services for the program. The initiative was developed based on research and input from independent filmmakers, industry advisors, the Institute’s Technology Committee and its Board of Directors.

Sundance Institute
Sundance Institute is a global nonprofit organization founded by Robert Redford in 1981. Through its programs for directors, screenwriters, producers, composers and playwrights, the Institute seeks to discover and support independent film and theatre artists from the United States and around the world, and to introduce audiences to their new work. The Institute promotes independent storytelling to inform, inspire, and unite diverse populations around the globe. Internationally recognized for its annual Sundance Film Festival, Sundance Institute has nurtured such projects as Born into Brothels, Trouble the Water, Son of Babylon, Amreeka, An Inconvenient Truth, Spring Awakening, Light in the Piazza and Angels in America. The Sundance Institute Artist Services initiative is made possible by The Bertha Foundation. O’Melveny & Myers generously provided pro bono legal services for the program. The initiative was developed based on research and input from independent filmmakers, industry advisors, the Institute’s Technology Committee and its Board of Directors. Join Sundance Institute on Facebook, Twitter and YouTube.

Amazon
Amazon.com, Inc. (NASDAQ: AMZN), a Fortune 500 company based in Seattle, opened on the World Wide Web in July 1995 and today offers Earth’s Biggest Selection. Amazon.com, Inc. seeks to be Earth’s most customer-centric company, where customers can find and discover anything they might want to buy online, and endeavors to offer its customers the lowest possible prices. Amazon.com and other sellers offer millions of unique new, refurbished and used items in categories such as Books; Movies, Music & Games; Digital Downloads; Electronics & Computers; Home & Garden; Toys, Kids & Baby; Grocery; Apparel, Shoes & Jewelry; Health & Beauty; Sports & Outdoors; and Tools, Auto & Industrial. Amazon Web Services provides Amazon’s developer customers with access to in-the-cloud infrastructure services based on Amazon’s own back-end technology platform, which developers can use to enable virtually any type of business. Kindle, Kindle 3G, Kindle with Special Offers and Kindle DX are the revolutionary portable readers that wirelessly download books, magazines, newspapers, blogs and personal documents to a crisp, high-resolution electronic ink display that looks and reads like real paper. Kindle 3G and Kindle DX utilize the same 3G wireless technology as advanced cell phones, so users never need to hunt for a Wi-Fi hotspot. Kindle is the #1 bestselling product across the millions of items sold on Amazon.
www.amazon.com

The Bertha Foundation
The Bertha Foundation was established in 2010 by a family who believes that bright ideas, combined with resources and strong leadership, can create profound social impact. We believe in the power of social activism to generate social, political, economic and environmental change. We believe in passionate individuals and projects that can effect change on a local or global scale. Our goal is to facilitate and support their growth. We hope those touched by The Bertha Foundation will in turn be inspired and motivated to create meaningful opportunities for others. www.berthafoundation.org

Netflix
With more than 25 million members in the United States and Canada, Netflix, Inc. (Nasdaq: NFLX) is the world’s leading Internet subscription service for enjoying movies and TV shows. For $7.99 a month, Netflix members in the U.S. and Canada instantly watch unlimited TV episodes and movies streaming over the Internet to PCs, Macs and TVs. Among the large and expanding base of devices streaming from Netflix are the Microsoft Xbox 360, Nintendo Wii and Sony PS3 consoles; an array of Blu-ray disc players, Internet-connected TVs, home theater systems, digital video recorders and Internet video players; Apple’s iPhone, iPad and iPod touch, as well as Apple TV and Google TV. In all, more than 200 devices that stream from Netflix are available in the U.S. and a growing number are available in Canada.  www.netflix.com

O’Melveny & Myers Entertainment, Sports and Media Practice
For nearly a century, O’Melveny & Myers LLP has represented motion picture studios, television, music, and new media companies, sports organizations, governing bodies, professional sports teams (and their owners), financial institutions, strategic investors, and individual talent on groundbreaking and significant industry transactions. At the core of the Entertainment and Media Practice is the representation of clients in transactions involving the production, financing, and distribution of motion pictures and television programming aimed at audiences around the world. Our firm’s extensive experience with businesses in the new media, telecommunications, and convergence sectors, combined with our long-standing relationships and know-how in the entertainment, electronics, and financial services industries, can provide a critical link for companies. www.omm.com/entertainmentandmediatransactions/

YouTube
YouTube is the world’s most popular online video community allowing millions of people to discover, watch and share original videos.  YouTube provides a forum for people to connect, inform and inspire others across the globe and acts as a distribution platform for original content creators and advertisers large and small. YouTube, LLC is based in San Bruno, Calif., and is a subsidiary of Google Inc. www.youtube.com