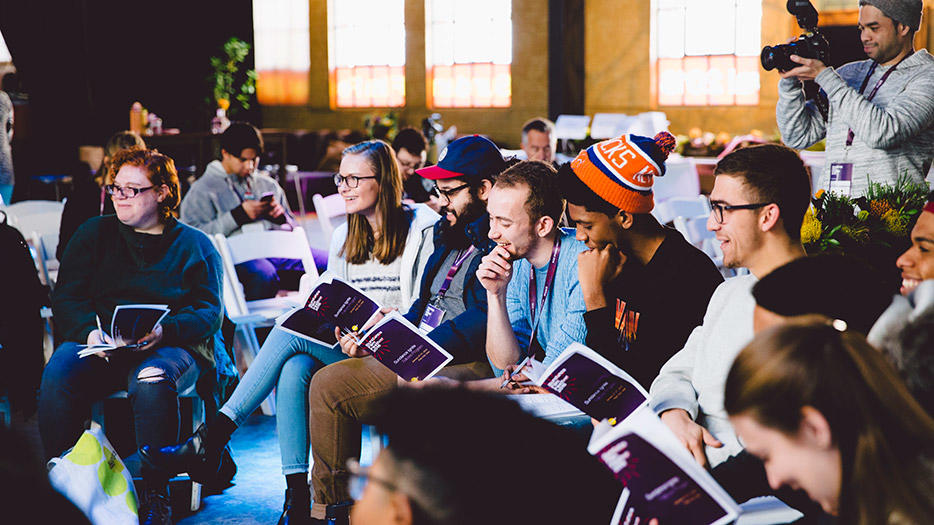 Los Angeles, CA — Sundance Institute and Adobe Project 1324 announced the newest round of 2018 Sundance Ignite
Fellows today, chosen from a global crop of more than 800 applicants. The fifteen 18-to-24-year-old filmmakers selected
to participate in this one-year fellowship hail from five continents, with creative groundings spanning from television
writing to documentary photography to narrative short films.

“These fifteen remarkable emerging artists are truly on the forefront of what’s next in our culture, and
we are thrilled to help them reach the next level with their fresh voices and unique perspectives,” said
Meredith Lavitt, Director of Sundance Ignite. “Sundance Ignite fellows aren’t tomorrow’s filmmakers
— they are today’s filmmakers, and we look forward to connecting them to a wealth of opportunities for growth
during their year with us.”

For the third year, fellows were selected from their submissions of one- to eight-minute original films and their written
applications. This year’s prompt asked,
“What stories ignite you?” Submissions were evaluated by Institute staff, Adobe Project 1324, and
industry mentors and finalists were selected based on their original voice, diverse storytelling and rigor in their
filmmaking pursuits.

With Sundance Ignite as their launchpad, past fellows have springboarded into opportunities on the festival circuit, graduate
film programs and beyond. Past Sundance Ignite Fellows include
Charlotte Regan, whose winning submission

Smoke That Travels
was part of
her talk at TED2017; social impact documentary filmmaker
Leah Galant (

The Provider
, Official Selection SXSW 2016) and
Sachin Dharwadker, who was recently named one of Sundance Institute’s 2017 Episodic Lab fellows with his
project
The Prince of Hyde Park.

The 2018 Sundance Ignite Fellows are:

Amri Rigby is a filmmaker born and raised in Decatur, Georgia. He is currently majoring in Arts, Technology
and the Business of Innovation at the University of Southern California’s Jimmy Iovine and Andre Young Academy.
Once he discovered his passion for storytelling after taking an animation class, he decided to pursue filmmaking. Amri
aims to create films that engage audiences by inspiring, uplifting and empowering.

Andrea Porras-Madero was born and raised in Mexico. She moved to California at age 14, where she began making
films. She is currently a double major in Film Production and Latin American Studies at the University of Southern California.

Artist, filmmaker Ayo Akingbade was born and raised in Hackney, East London. She experiments with a range of media, including
combining analogue techniques with digital processes. In 2017, her project
Tower XYZ received a Special Mention Award at International Short Film Festival Oberhausen, she obtained a film
degree from London College of Communication and participated in Ji.hlava’s Academy in the Czech Republic.

Carol Nguyen is a 19-year-old filmmaker based in Toronto. Her work explores culture, identity and family, topics
that heavily define her understanding of the world. Through her career, Carol aims to tackle gender equality and diversity
in film. Today, Carol is continuing her passion for filmmaking at Concordia University in Montreal.

Crystal Kayiza grew-up in Oklahoma and is now a Brooklyn-based documentary filmmaker and Sally Burns Shenkman
Woman Filmmaker Fellow at the Jacob Burns Film Center. After graduating from Ithaca College with a degree in Documentary
Studies and Production, Crystal spent two years at the ACLU working on criminalization of poverty issues. Her documentary
work and writing has been featured in
The Nation,
Scalawag Magazine and
OkayAfrica. She received a Heartland Emmy Award in 2017 for her film
All That Remains, which profiles Boley, Oklahoma, one of the nation’s last all-Black towns.

Gerardo Coello Escalante is a Mexican filmmaker. He was born and raised in Mexico City where he attended various
filmmaking and theater workshops and programs. In 2013, he moved to New York and attended NYU’s Tisch School of
the Arts, graduating in December 2016. Gerardo currently works on independent films and documentaries while writing and
directing his own work in between projects.

Matthew Puccini is a Brooklyn-based filmmaker. His first film,
Solo, won the King Award for Screenwriting at NYU’s First Run Film Festival. His second short,
The Mess He Made, premiered at SXSW and was a finalist for this year’s Iris Prize. Matthew is a member of
the 2017 New York Film Festival Artist Academy, a recipient of the 2017 Richie Jackson Artist Fellowship and an Artist
in Residence at The Spruceton Inn.

Matty Crawford is a writer/director and recent graduate from the UK. His short films have screened at BAFTA-recognised
festivals, collecting a number of awards such as Best Director Award at the Kodak/Nahemi Competition and the New Talent
Award at this year’s BFI Future Film Festival. He has recently finished production on a new short film funded by
the Arts Council England, as his next short film
LOVE HOTEL premieres at London Short Film Festival in 2018.

Mohamed Touahria is an Algerian filmmaker studying English at Djelfa University in Algeria. He has made three
short films and participated in short film festivals across north Africa.

Paloma Lopez is a filmmaker from Caracas, Venezuela. She graduated from the Savannah College of Art and
Design in 2017, with her senior thesis film
Singer. She currently lives and works in Los Angeles, where she is an assistant to an independent film director.
Her passion lies in the visual storytelling aspect of documentary photography, which sparked her love for film.

Sindha Agha is a Pakistani-American independent filmmaker who grew-up in a small town in Illinois and is
now based in Los Angeles. Sindha experiments with documentary & narrative genres to create candid, intimate films
that illustrate how social forces shape deeply personal experiences. She is dedicated to helping people understand one
another better, keen on dialetheism, married to sincerity and has it out for shame.

Sky Bruno is a filmmaker based in Kāneʻohe, Hawaiʻi. He is currently studying Digital Cinema at the University of Hawaiʻi at Manoa’s Academy for Creative Media. His latest short-doc
SHAPE was an official selection at the 2017 Honolulu Surf Film Festival and the 2017 ʻOhina Short Film Showcase.
With his passion for filmmaking, Sky hopes to create opportunities in Hawaiʻi and help develop original voices in the
future generations of storytellers.

Sidney Butler is an aspiring screenwriter from Houston, Texas. Her television pilot,
Stella with the World on Her Shoulders, was one of two pilots produced by NYU’s highly selective Advanced Television Course, and was fully funded by the Will & Jada Smith Family Foundation. Her writing has been
published in
Interview, The Light Leaks and on Medium. She currently resides in Los Angeles where she is the writer’s PA for the Untitled Grey’s Anatomy spinoff.

Terrance Daye is an award winning poet and filmmaker from Long Island, New York. Terrance’s creative work
reimagines traditional representations of black male identity and invests strongly in destigmatizing mental illness within
the black community. Terrance received his Bachelor’s from Morehouse College and is pursuing his MFA in filmmaking
from NYU Tisch School of the Arts. Terrance’s most recent film project,
The Colored Hospital: A Visual Poem was shortlisted for the 44th Student Academy Awards.

Born and raised in New Delhi, Varun Chopra graduated from Loyola Marymount University School of Film and Television where he focused on stories
of common people with aspects of social justice. He was the recipient of the SFTV Dean’s Scholarship. His short
films have screened at various International film festivals. He was featured in the
Los Angeles Times among a team of diverse filmmakers on a discussion on diversity in Hollywood. Varun works in Los
Angeles as a freelance director and is currently editing a television show currently streaming on Netflix. He is one
of the ten fellows of Visual Communication’s Armed with a Camera fellowship for 2017-2018.

Sundance Ignite is a partnership with
Project 1324, an Adobe initiative that supports, connects and amplifies a global community of emerging creatives
who are making an impact through their art. More details about Sundance Ignite are available at
sundance.org/initiatives/ignite. Follow the Project 1324 community on

Founded in 1981 by Robert Redford, Sundance Institute is a nonprofit organization that provides and preserves the space
for artists in film, theatre, and new media to create and thrive. The Institute’s signature Labs, granting, and mentorship
programs, dedicated to developing new work, take place throughout the year in the U.S. and internationally. The Sundance
Film Festival and other public programs connect audiences to artists in igniting new ideas, discovering original voices,
and building a community dedicated to independent storytelling. Sundance Institute has supported such projects as
Boyhood, Swiss Army Man, Manchester By the Sea, Brooklyn, Little Miss Sunshine, Life, Animated, Sonita, 20 Feet From
Stardom, Beasts of the Southern Wild
,
Fruitvale Station,
Sin Nombre,
Spring Awakening,
A Gentleman’s Guide to Love and Murder and
Fun Home. Join
Sundance Institute on
Facebook,
Instagram,
Twitter and
YouTube.

Adobe is changing the world through digital experiences. For more information, visit
www.adobe.com.