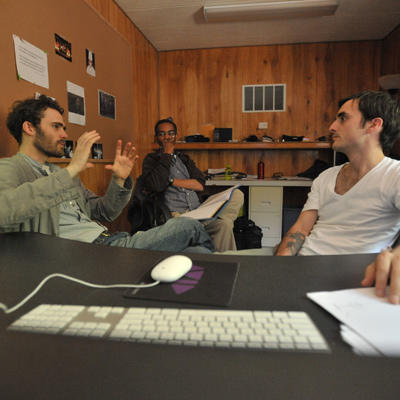 Lab Fellows are invited from a pool of 40-60 active DFP-supported projects. Built upon the Sundance Institute Lab model launched in 1981 by Robert Redford, Fellows participate in an intensive, residential retreat focused on creative support around issues of story and structure. Renowned film professionals join with Institute staff as Creative Advisors to the Fellows and their projects.

“Holistic creative and professional support for independent documentary films are at the heart of the Sundance Institute DFP mission, and we are thrilled to be increasing the amount of time and resources dedicated to cultivating both film projects and the ongoing careers of independent documentarians through these Labs,” said Cara Mertes, director of the Sundance Institute Documentary Film Program. “The Labs offer an opportunity to build new communities of practice in documentary, as well as infusing the documentary field with a deep understanding of the important role of original composition in non-fiction cinema.”

The Documentary Edit and Story Lab is an 8-day immersive Lab focusing on the art of editing in documentary.  Five in-production documentary film teams are mentored by leading editors and directors all working to meet the film’s highest potential. Since 2009, the Composers + Documentary Lab has evolved to a stand-alone Lab over six days, pairing four DFP grantee projects with four emerging film composers specifically interested in documentary. The Lab offers a unique opportunity to explore the role of composition in non-fiction filmmaking. Mentors include leading film composers and  documentarians.

“The Fellows selected for these Labs represent some of the most exciting documentary projects currently being developed, and we are inspired by their potential to impact audiences in meaningful ways,” said Keri Putnam, executive director of Sundance Institute. “The Composers + Documentary Lab, which represents the combined efforts of the Sundance Institute Documentary Film and Film Music Programs, is a strong example of the collaborative nature of filmmaking as well as the need to help artists craft thoughtful music to accompany and enhance non-fiction storytelling.”

The five films selected for the 2011 Sundance Institute Documentary Edit and Story Lab are:

¿Donde Estan?  (U.S./El Salvador)
Director: Maria Teresa Rodriguez
Producer: Kaye Pyle
Editor: Ann Tegnell
¿Dónde Están? documents the search for children who disappeared during the Salvadoran civil war.  Told through the eyes of three individuals searching for their family, identity and justice in post-conflict El Salvador, it asks how a post-war society can right the wrongs of the past.

The Revolutionary Optimists (U.S.)
Codirectors: Maren Grainger-Monsen, Nicole Newnham
Editor: Andrew Gersh
Amlan Ganguly empowers children in the slums of Calcutta to become change agents, battling poverty and transforming their neighborhoods with dramatic results. The Revolutionary Optimists follows Amlan and three children he works with on an intimate journey through adolescence, as they bravely fight the forces that oppress them, including polio, child labor and child marriage.

The four films selected for the 2011 Sundance Institute Composers + Documentary Lab are:

Gardens of Paradise (U.S.)
Director: Bernardo Ruiz
Composer: Ben Goldberg
A veteran reporter and his colleagues at an embattled news weekly challenge the drug cartels and corrupt local officials during a wave of unprecedented violence against journalists in Mexico.

The House That Herman Built (Canada/U.S.)
Director: Angad Bhalla
Editor: Ricardo Acosta
Composer: Ronen Landa
Herman’s House (formerly The House That Herman Built) captures the remarkable creative journey and friendship of Herman Wallace, who was imprisoned in a 6-by-9-foot cell for over 30 years, and artist Jackie Sumell while examining the injustice of prolonged solitary confinement.

A Place at the Table (U.S.)
Director/Producer: Jerret Engle
Coproducer: Cort Tramontin
Composer: Michael Roth
The small but tenacious Eziko Cooking and Catering Centre trains some of the poorest people from Cape Town’s slums for skilled jobs in the restaurant industry A Place at the Table follows four of these students through classes and into internships at luxury hotels, where they are quickly pushed beyond the boundaries of their own dreams, into new and uncertain terrain.  Their experiences provide a remarkable window on a struggle millions of the world’s poor undertake every day:  the surprisingly difficult journey from poverty to middle class life.