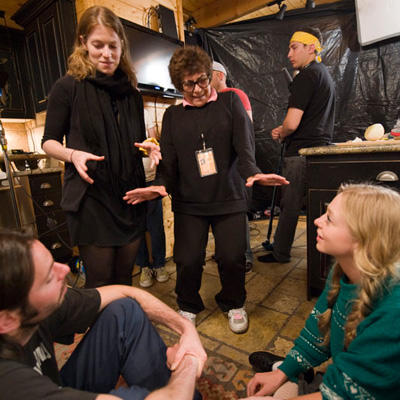 Putnam noted, “Sundance Institute has long believed in the value of diverse storytellers contributing to a vibrant culture. Looking at representation of women filmmakers is an important activity in that context, and we wanted to start our inquiry in our own organization. What we’ve already found is that if statistics tell us a story, the story being told about women filmmakers today needs work.”

16.9% of the 3,879 feature films in both narrative and documentary categories submitted to the 2012 Sundance Film Festival were directed by women. While the number of films made by women as directors and producers is higher in the independent film arena, and particularly among documentary films, there remains a marked disparity between the numbers of feature length films completed by male versus female filmmakers.

Recognizing a unique opportunity to advance film culture and to forward its mission to discover and develop independent artists and audiences, Sundance Institute has collaborated with Women In Film to take a fresh look at this issue. Together, they will ultimately harness the creative programs of both institutions to understand and work toward addressing these challenges.

Schulman said “Studies have shown that women make up just 16% of the behind the scenes crew on domestically produced commercial films.   We want to commit our collective Women In Film and Sundance Institute influence and resources to make sure women beginning their filmmaking career at Sundance Institute continue to have a support system all along the way.  We want to encourage long and productive careers for these women, in hopes that they will pave the way to increasing the overall number of films made for and by women into the future.”

Looking at distribution statistics regarding the 250 top-grossing films released 2010 (compiled by womenintvfilm.sdsu.edu), only 7% were directed by women, 10% written by women and 24% produced by women. Early research shows that when the number of women in behind the camera roles increases, so do the roles for women in front of the camera and so does the content interesting to women and girls worldwide. These encouraging facts indicate that we can be effective in driving these poor statistics upwards through ongoing discourse and strategic programs.

The initial goals for 2012 are to invite considered reflection and study on the statistics regarding women filmmakers; to follow the 2012 Sundance Institute “class” of female Festival filmmakers, Fund and Lab filmmakers to analyze challenges they may face moving projects forward; and finally to formulate a vision for what may be possible within the scope of both institutions’ programs. The efforts will focus on supporting opportunities or paths toward sustained careers, inclusivity and parity, and the diversity in the content and backgrounds of women filmmakers. In addition, Women In Film has agreed to co-program a symposium in Los Angeles with Sundance Institute spotlighting the challenges facing independent women filmmakers, and to open up their mentorship and career counseling programs to Sundance Institute supported filmmakers where they will receive guidance, mentoring, and business and creative support services.

Women In Film
Women In Film is a non-profit organization dedicated to helping women achieve their highest potential within the global entertainment, communication and media industries and to preserving the legacy of women within those industries.  Founded in 1973, Women In Film and its Women In Film Foundation provide for members an extensive network of contacts, educational programs, scholarships, film finishing funds and grants, access to employment opportunities, mentorships and numerous practical services in support of this mission.  For more information about Women In Film and programs, visit www.wif.org.