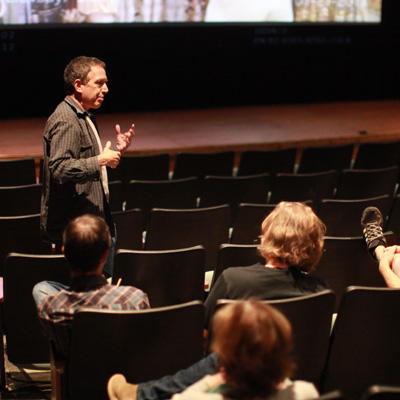 Los Angeles, CA — Sundance Institute and Skywalker Sound today announced that the Sundance Institute Music and Sound Design Labs at Skywalker Sound will take place at Skywalker Ranch in 2013 and 2014 and also announced the artists that will participate in the 2013 Labs. This is the first time the two organizations will collaborate to support independent filmmakers and film composers and marks a significant expansion of the Institute’s existing Composers Labs to include sound design.

The Institute has hosted its Composers Labs at Sundance Resort for fiction feature films since 1999 and documentaries since 2005, allowing composers and independent filmmakers to collaboratively explore the process of writing music for film. Fellows also participate in workshops and creative exercises under the guidance of leading film composers and film music professionals acting as Creative Advisors.

Keri Putnam, Executive Director of Sundance Institute, said, “Hosting the Composers Labs at Skywalker Ranch allows an expansion of the program to include sound design, giving further insight into the powerful ways that sound and music can impact independent films. We are deeply grateful to the Skywalker team for working with us to provide our Fellows with the tremendous benefit of accessing this legendary facility”

Josh Lowden, General Manager of Skywalker Sound, said, “We’re very excited to formalize this relationship. Sundance Institute is virtually synonymous with independent film, and Keri and her team have done an amazing job to honor the Institute’s legacy. Twenty-five years ago Skywalker was founded by a filmmaker for filmmakers, and we have never forgotten our roots. We continue to believe in independent filmmaking, and are thrilled to deepen our relationship with the Institute by hosting these Labs at Skywalker.”

Peter Golub, Director of the Sundance Institute Film Music Program, said, “Skywalker Sound is a leader in the field of post-production and sound design, and their world-class facilities offer the ideal environment for our Composers Labs. Lab fellows will have access to Skywalker’s sound designers and mixers for ongoing collaboration, as well as the state-of-the-art facility during their stay.”

Artists and projects selected for the 2013 Sundance Music And Sound Design Lab – Documentary (June 3-10) are:

Director: Kirsten Johnson
A Blind Eye (U.S.) — The voice of an American camerawoman explores the nature of cinematography and what she has failed to see while filming in Afghanistan through her encounters with two Afghan teenagers. Najeeb, a one-eyed boy, struggles to hide what really haunts him, while a bold teenage girl must decide how much she will risk to be visible. A U.S. Military surveillance blimp in the sky over Kabul tracks their every move.

Director: Judith Ehrlich
Open (U.S.) — The fight for free speech in the 21st century is being fought in cyberspace, and its most dramatic story may be unfolding in Iceland. Open follows trailblazing Internet revolutionary Birgitta Jónsdóttir and three generations of digital “hacktivists” as their stories converge in the tiny island nation now poised to become the world’s first haven for freedom of information and transparency online and off.

Director: Thomas Allen Harris
Through a Lens Darkly: Black Photographers and the Emergence of a People (U.S.) — A 90-minute documentary film with an innovative companion transmedia project that explores the ways black communities have used the medium of photography to construct political, aesthetic and cultural representations of themselves and their world. This will be the first film to vividly bring to life the individual photographers, photographic collectives, and anonymous and celebrated subjects, whose work has transformed the lives of African Americans through the magic and power of the camera lens.

Kathryn Bostic
Kathryn Bostic is a prolific composer, pianist and singer-songwriter. She is a recipient of several awards and fellowships including the Sundance Fellowship for Feature Film Scoring, BMI Conducting Fellowship and the ASCAP Musical Theatre Workshop. She has written for both off-Broadway and Broadway productions. Currently her score can be heard in the Mark Taper production of August Wilson’s Joe Turner’s Come and Gone.

Miles Jay
Miles Jay is a composer, contrabassist, and multi-instrumentalist with many traditional and cross over artists around the world. Supporting himself as a musician around the Eastern Mediterranean and North Africa for much of the last decade, Miles has re-imagined the contrabass, adapting a wide range of melodic ornamentation to his own technique, as well as having invented and hand-built a new type of contrabass utilizing rawhide for a soundboard. Miles has performed in such venues as Carnegie Hall, the Emirates Palace Abu Dhabi, TED, and the United Nations.

Todd Reynolds
Todd Reynolds is a long-time New York violinist for Bang on a Can, Steve Reich, Broadway, and founder of the string quartet known as ETHEL. His double CD set, Outerborough, rose to “best in classical” on the Amazon classical charts of 2011. A classical violinist ‘gone horribly wrong’, his genre-defying and technologically savvy music and performances have been called “a charming, multi-mood extravaganza, playful like Milhaud, but hard-edged like Hendrix.”

Artists and projects selected for the 2013 Sundance Music And Sound Design Lab – Feature Film (July 10-25) are:

Writer/director: Miguel Calderón
Zeus (Mexico) — Sporadically employed and still living with his mother, Joel finds his only joy in falconry in the flatlands outside Mexico City, until an encounter with a down-to-earth secretary forces him to face reality.

Writer/director: Meredith Danluck
State Like Sleep (U.S.A.) — Under the surreal cloud cover of northern Europe, a young American widow reluctantly revisits her past when her mother is hospitalized in Brussels. While coping with the bleak reality of parental loss, Katherine explores her deceased husband’s secret life of underground sex clubs and finds comfort in a relationship with a stranger as equally broken as she is.

Writer/director: K’naan
Maanokoobiyo (Somalia/U.S.A.) — In war-torn Somalia, an artistic orphan named Maano joins the mercenary killing squad of a notorious warlord, only to discover his adoptive father and gang leader is responsible for wiping out his family.

Writer/director: Pamela Romanowsky
The Adderall Diaries (U.S.A.) — Writer Stephen Elliott reaches a low point when his estranged father resurfaces, claiming that Stephen has fabricated much of the dark childhood that that fuels his work. Adrift in the precarious grey area of memory, Stephen has to navigate the unstable terrain of truth and identity, led by two sources of inspiration: a new romance, and a murder trial that reminds him more than a little of his own story. Based on the memoir by Stephen Elliott.

Co-writer/director: Eva Weber
Let the Northern Lights Erase Your Name (UK/Germany/U.S.A.) — Twenty-eight-year-old Clarissa discovers on the day of her father’s funeral that everything she believed about her life was a lie. She flees San Francisco and travels to the Arctic Circle to uncover the secrets of her mother, who mysteriously vanished when Clarissa was fourteen. Based on the novel by Vendela Vida.

Jongnic Bontemps
Jongnic Bontemps has had the pleasure to score numerous films, including award-winning Daughter of Fortune, A Different Tree, Soaring on Invisible Wings and Saudade. Jongnic’s scores incorporate ethnic instruments with organic and synthetic textures to create a unique musical world for a film. This skill has been honed through his music education at Yale University, Berklee School of Music and the University of Southern California and his collaborations with some of the top film composers. Jongnic’s scores have been heard at film festivals around the world including Cannes, The Pan African Film Festival, American Black Film Festival and Run & Shoot Martha’s Vineyard

Lucas Lechowski
Based in Los Angeles, Polish born Lucas Lechowski is a violinist/guitarist who creates music, experiments with sounds, improvises and performs. His recent film scoring credits include a 2013 Student Academy Award winner “Un mundo para Raúl” (dir. Mauro Mueller). Currently he is composing music for a two-hour NBC News television special commemorating the 50th anniversary of the death of President Kennedy, entitled “Where Were You?”

Heather McIntosh
Heather McIntosh is a cellist, bassist and composer who got her musical start playing with the Elephant 6 collective in Athens, Georgia and continued on to perform with artists such as Gnarls Barkley and Lil Wayne. Recently relocated to Los Angeles, her film credits include Compliance by Craig Zobel and The Rambler by Calvin Lee Reeder.

Vladimir Podgoretsky
Vladimir Podgoretsky started his professional career as a musical theater composer. His 2007 ballet Snow Maiden (Snegurochka) was a huge success and continues to be regularly performed in theaters throughout Moscow. Vladimir moved to the US to become a film composer and after graduating from the UCLA film scoring program has been working with leading composers on films such as Rise of the Guardians, A Single Shot, The Eagle, Season Of the Witch and Hansel and Gretel: Witch Hunters. He has also worked on the acclaimed video game World of Warcraft and the ABC TV series Revenge.

Mac Quayle
A resident of Topanga Canyon, California, Mac Quayle has written music for over 20 films and television shows and accumulated a long list of credits as a music producer, dance remixer and multi-instrumentalist, including a Grammy nomination for producing Donna Summer. His music is heard in films such as the Indian documentary Beyond Grace and the Irish drama A Belfast Story and some of his collaborations as an additional composer appear in Drive, Spring Breakers and Only God Forgives.

The Sundance Institute Music and Sound Design Labs at Skywalker Sound are made possible by BMI, Time Warner Foundation, and the Film Music Foundation.