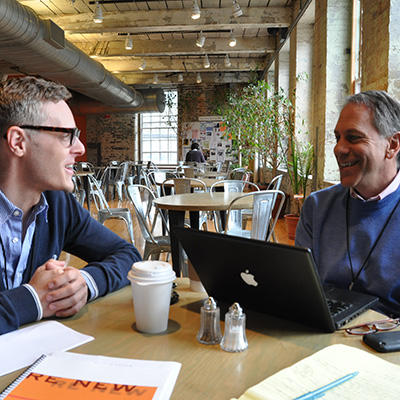 The Retreat will complement other initiatives of the Theatre Program by providing specific resources to directors in the field, including meeting the identified needs for more opportunities to exchange ideas and practices with other mid-career, freelance directors.

Keri Putnam, Executive Director of Sundance Institute, said, “The Theatre Directors Retreat marks an expansion of our Theatre Program to support directors exclusively for the first time. It also grows from our long-held belief that engaging in a new context, environment and community can provide fresh perspectives for artists.”

Philip Himberg, Artistic Director of the Sundance Institute Theatre Program, said, “We have long felt compelled to understand and support the specific needs of stage directors, and when our director alum, Anne Kaufman, came to us with many of the same concerns, we knew it was time to deepen our support in this area.”

Maja Hoffmann of the LUMA Foundation said, “’The LUMA Foundation is supporting Sundance Institute to develop live theater and performance art. We are happy to host the Theatre Directors Retreat in the inspiring surroundings of Arles where we plan our future cultural center for the 21st century.”

Indhu Rubasingham is Artistic Director of the Tricycle Theatre. Her inaugural production at the Tricycle, Red Velvet, was nominated for an Olivier Award for Outstanding Achievement by an Affiliate Theatre. The production will return to the Tricycle in 2014 prior to a run at St Ann’s Warehouse, New York. She was recently awarded the Arts & Culture Award at the Asian Women of Achievement Awards for astounding achievements in theatre. Indhu was awarded the Carlton Multi-Cultural Achievement Award for Performing Arts and in 2010 she received the Liberty Human Rights Arts Award for The Great Game: Afghanistan. She has previously been Associate Director of The Gate Theatre, Birmingham Rep and The Young Vic. For the Tricycle Theatre: Paper Dolls; Red Velvet; Women, Power & Politics; Stones in His Pockets; Detaining Justice; The Great Game: Afghanistan; Fabulation; Starstruck.

Ken Rus Schmoll is a freelance director who grew up in Bloomfield, Connecticut, and currently lives in Brooklyn, New York. His work has been seen at New York Theatre Workshop, Vineyard Theatre, Foundry Theatre, Clubbed Thumb, 13P, LCT3, SPF, Talking Band, Humana Festival, Spoleto Festival USA, Two River Theater, Long Wharf Theatre, and others. He is an affiliated artist with Clubbed Thumb, a Sundance Institute alum, co-chair of the Soho Rep Writer/Director Lab, and the recipient of two Obie Awards. Next up: Ain Gordon’s Not What Happened at BAM and George Brant’s Grounded for Page 73.

Chay Yew has directed the world premiers of Osvaldo Golijov and David Henry Hwang’s Ainadamar (Tanglewood, Lincoln Center and Los Angeles Philharmonic) and Rob Zuidam’s Rage D’amors (Tanglewood). For his direction, he was awarded the OBIE and Drama League Awards. He recently edited Version 3.0, an anthology of contemporary Asian American plays for TCG publications. An executive board member of Society of Directors and Choreographers and an alumnus of New Dramatists, he is also the artistic director of Victory Gardens Theater in Chicago. Upcoming projects include the world premieres of Luis Alfaro’s Mojada, Marcus Gardley’s Black Odyssey and Gospel of Lovingkindness, and the revival of Ariel Dorfman’s Death and the Maiden.

The Sundance Institute Theatre Program is made possible by generous support from The Andrew W. Mellon Foundation, National Endowment for the Arts, Time Warner Foundation, LUMA Foundation, and The Shubert Foundation.

Sundance Institute Theatre Program
The Theatre Program has been a core component of Sundance Institute since Robert Redford founded the Institute in 1984. The Theatre Program identifies and assists emerging theatre artists, contributes to the creative growth of established artists, and encourages and supports the development of new work for the stage. Under the guidance of Artistic Director Philip Himberg and Producing Director Christopher Hibma, the Theatre Program is the leading play development program in the United States. Titles such as Spring Awakening, An Iliad, I Am My Own Wife, The Good Negro, Circle Mirror Transformation, Passing Strange, Grey Gardens, Crowns and Marie Antoinette have gone from Theatre Program Labs to production from coast to coast and internationally, garnering multiple Pulitzers, Tonys, OBIEs and other recognition. The Theatre Program’s East Africa initiative is the only professional program of its type on the continent, offering Labs, cross-cultural exchange, mentorship and exposure to artists in six African countries. www.sundance.org/theatre

LUMA Foundation
The non-profit LUMA Foundation is committed to supporting the activities of independent artists and pioneers, as well as international institutions working in the fields of art and photography, publishing, documentary, and multimedia. Established by Maja Hoffmann, the foundation promotes challenging artistic projects combining a particular interest in environmental issues, human rights, education, and culture in the broadest sense.

The LUMA Foundation’s current focus is to create a truly experimental site, the Parc des Ateliers in Arles (France), dedicated to the production of art and ideas and developed with architect Frank Gehry. This ambitious project envisions an interdisciplinary centre for the production of exhibitions, research, education and archives, and is supported by a growing number of public and private partnerships.

The Foundation engages in long-term collaborations with institutions like the New Museum of Contemporary Art (New York), CCS Bard College (Annandale-on-Hudson, New York), Serpentine Gallery and Tate Modern (London), the Kunsthalle Zürich and the Fotomuseum Winterthur (Switzerland), as well as arts festivals and biennials around the world.