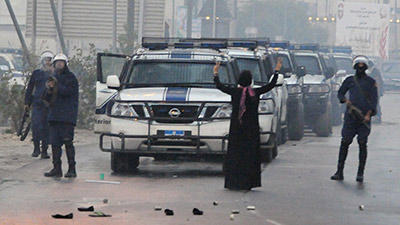 Park City, UT — Sundance Institute and the President’s Committee on the Arts and the Humanities will host a free public screening of We Are The Giant followed by a guided discussion with Director Greg Barker on March 8, 7:00 p.m. at the Jacob Burns Film Center in Pleasantville, NY. Following the screening, Barker will be joined by 1979 Revolution creator and video game designer Navid Khonsari and executive producer Vassiliki Khonsari to discuss new mediums for impactful storytelling, explore the theme of revolutionaries and share their motivations behind the creation of their social and political films and games.

Audience members who wish to attend the free screening and demonstration, please RSVP to Lori Zakalik at Lzakalik@burnsfilmcenter.org with your first and last name and the subject line “Sundance Film Forward Event.”

We Are The Giant transports viewers to the front lines of the Arab Spring and offers a harrowing look at the struggles of ordinary individuals who are transformed by the critical moral and personal challenges they encounter when standing up for what they believe is right.  It premiered at the 2014 Sundance Film Festival

1979 Revolution is an episodic action/adventure game designed to engage players with an immersive “on the ground” experience of the Iranian Revolution.  The game integrates an emotionally impactful narrative with interactive moral choices and intuitive touchscreen gameplay while remaining true to history.  It premiered at the 2015 Sundance Film Festival.

The Institute of Museum and Library Services is the primary source of federal support for the nation’s 123,000 libraries and 35,000 museums. The mission of IMLS is to inspire libraries and museums to advance innovation, lifelong learning, and cultural and civic engagement. The agency’s grant making, policy development, and research help libraries and museums deliver valuable services that make it possible for communities and individuals to thrive. To learn more, visit http://www.imls.gov and follow @US_IMLS on Twitter and on Facebook.

The Jacob Burns Film Center is a nonprofit cultural arts organization dedicated to: presenting the best of independent, documentary, and world cinema; promoting 21st century literacy, and making film a vibrant part of the community. Located on a 47,500 sq. foot, three-building campus in the center of Pleasantville, the JBFC is just 30 miles outside of New York City. Since the opening in 2001, over 2 million people have seen over 5,400 films from more than 40-plus countries. The campus includes the 27,000 sq. foot Media Arts Lab, the JBFC’s state-of-the-art education center, a creative and educational community for storytellers in the digital age, offering one-time workshops, intensive courses, and weekend programs for children and adults of all ages.