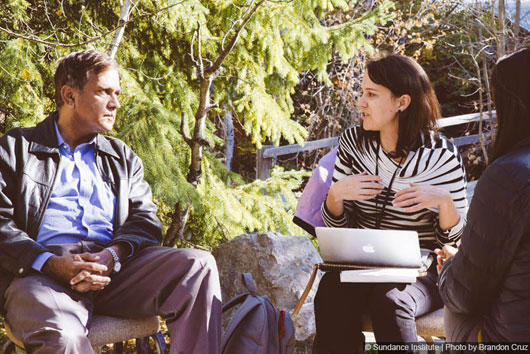 As filmmakers, we are forever on the hunt for stories. We are greedy for these little delicious nuggets of human experience, placed in some kind of order, an order that elicits emotion. We crave that moment when someone, somewhere, sees something we’ve made, on a big or small screen, and gets a tear in their eye, or laughs out loud or slams their fist into the couch because it’s the only logical reaction. Now and then, something we’ve made changes someone’s mind. Sometimes, stories we tell change someone’s life.

Social entrepreneurs, from what I gathered in three days at the Sundance Institute | Skoll Foundation Stories of Change Convening, are greedy for Godzilla-sized impact. Poverty in the United States, India’s broken rural healthcare system, outrageous corruption in Africa and beyond, poor farmers in Myanmar who can’t afford basic farming equipment – these are problems that these daring social entrepreneurs have the audacity to try to fix.

So what happens when you put four filmmakers and four Skoll-Awarded Social Entrepreneurs (each accompanied by a senior staffer from their organization) in a room for three days (with a few breaks for fresh mountain air, or meditating upon a bubbling brook)? Pure love. Really – I’m not being gushy. There was a frisson during our brainstorming sessions that made me realize that we, the filmmakers, had a lot in common with the social entrepreneurs we were paired with. We were there to help dig out new stories from their work, or to find new ways of telling their stories. It was really, really hard – at least for me. Articulating (in my case, trying, and failing, and trying again to articulate) why stories work, or don’t, and how to tinker with them so that audiences are truly moved, deep in their souls, is tricky business. And being a first-time media advisor was terrifying indeed.

But it was also a lot of fun.

1. Their stories have built-in drama

Social entrepreneurs encounter some of the most challenging dilemmas in some of the most interesting places in the world. And even here in the United States, their work provides access to stories we may take for granted. Rebecca Onie from Health Leads described low-income families in Boston coming into emergency rooms needing not health services, but really, housing, food and heat in winter. What happens when doctors start to write prescriptions not for medicine but for food? Natural drama, moments of crisis, life-affirming resolution, are built into their work.

Social entrepreneurs are innovative by definition, and by necessity. They come up against roadblocks. Tenacious beings all, they figure out a way around, through, over or under whatever is standing in their way. So when you put that creativity into storytelling, it’s dynamite. Our little crew – Gopi Gopalakrishnan and Karen Pak Oppenheimer from World Health Partners and I – sat beside a bubbling brook, sun warming our faces, and started brainstorming. Once we got going, we couldn’t stop! Here’s a glimpse into our brains.

Each social entrepreneur had to give a short presentation about their work, and my impulse was to kiss their feet. They would have none of it.  The danger when making films about, or with, organizations, is that you lose critical distance. You can end up with a puff piece. It’s so easy to fall in love with your characters when they are engaged in such difficult and brave work. But it doesn’t make for a good film. My hunch is that working with these social entrepreneurs, they wouldn’t let you glorify their work. They are too aware of their own blind spots. They enjoy the process of trying, failing, failing harder. They are mindful that others are doing good work too, and they see themselves not as ‘the answer’ but as a catalyst. They are a bridge between what’s possible now, and what’s desirable in the future. Also, they defy the ‘white male hero swoops in to save the day’ narrative. In Myanmar, the talented designers of Proximity Designs’ cool-looking, imaginatively-named and cheap farming equipment, are homegrown, not imported. Each organization is working to make the people they ‘help’ be their own heroes.

The Stories of Change Convening is a 3-day intensive storytelling workshop where Sundance-supported filmmakers help Skoll-Awarded Social Entrepreneurs identify and develop their organization’s stories in an immersive lab-like setting. Now in it’s seventh year, the Stories of Change initiative is a partnership between Sundance Institute and Skoll Foundation that harnesses the power of storytelling to help address the world’s most pressing problems.

Dara Kell is a South African filmmaker and editor. She directed Dear Mandela, which won multiple awards including Grand Jury Prize at the Brooklyn Film Festival and Best South African Documentary at the Durban International Film Festival. The film was broadcast across Europe and the African continent, and on PBS in the United States. It was nominated for an African Academy Award and has been translated into 10 languages. “Dear Mandela” is the centerpiece of a global community engagement project that educates slum residents about their housing rights and inspires young people to become leaders. Strategic screening tours of the film have taken place in Haiti, Mali and Brazil, with tours forthcoming in India, Nigeria and South Africa. Dara was commissioned to create a series of films about children’s perspectives of the 2014 FIFA World Cup. Filmed in Brazil’s army-occupied favelas, the documentaries are part of a campaign to make mega sporting events more safe and fair for children. Dara’s short film about jailed Uyghur dissident Ilham Tohti was created for PEN America and is being used to advocate for Tohti’s freedom in China. Dara’s most recent editing work is featured on Albert Maysles’s film “Iris” which premiered at the 2014 New York Film Festival. She was co-editor of “The Reckoning” (Sundance Film Festival, 2009) and was an additional editor on the Academy Award-nominated “Jesus Camp”. She won a New York Emmy Award for her editing work, and is the recipient of Participant Media’s ‘Outstanding Filmmaker’ award, representing Africa. Dara runs New York-based production company Sleeping Giant together with her filmmaking partner and husband Christopher Nizza. Their work has been supported by the Sundance Institute, the New York State Council on the Arts and the Ford Foundation.

Dara studied Journalism and Political Science at Rhodes University and creative writing at the Iowa Writers Workshop. She is a published poet and is currently at work on a collection of short stories about South Africa.