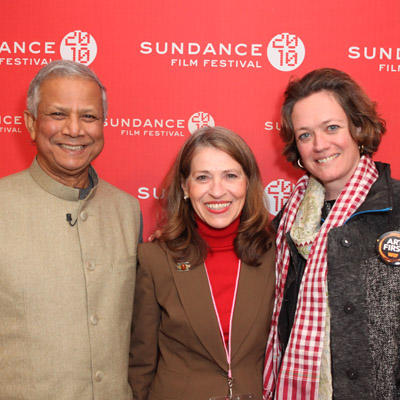 Los Angeles, CA – The Sundance Institute Documentary Film Program and the Skoll Foundation today announced a special Celebrating “Stories of Change” panel to be held at the 2012 Sundance Film Festival. The panel celebrates the fifth anniversary of the Stories of Change: Social Entrepreneurship in Focus Through Documentary initiative, dedicated to exploring film’s role in advancing knowledge about social entrepreneurship.

At this special event on Tuesday, January 24, 3:00 p.m. at the Egyptian Theatre, Skoll Foundation President and CEO Sally Osberg will moderate a thought-provoking dialogue between award-winning filmmakers (including clips from their work) and innovators who are impacting millions. Panelists include Joia Mukherjee (Partners in Health), Jehane Noujaim (Director, Control Room), Bunker Roy (Founder, Barefoot College) and Kief Davidson (Director, The Devil’s Miner). Ticket information is available at www.sundance.org/tickets.

Also at the Festival, the Documentary Film Program and the Skoll Foundation will host a Stories of Change Convening. A series of private workshops focused on storytelling strategies as well as nightly networking events, film screenings and panels will create a framework for defining entrepreneurs’ unique personal and organizational stories. A select group of Skoll Foundation-awarded social entrepreneurs and filmmakers will participate.

“It is a gift not only to put the work in, but also get the word out,” said Sally Osberg, CEO of the Skoll Foundation. “We believe in the power of social entrepreneurs to find innovative ways to solve the planet’s most daunting problems – and then, ingenious ways to spread the message that change is not just possible, it is essential.”

Since 2007, Stories of Change has supported nearly 100 filmmakers and social entrepreneurs through a strategic combination of high-level, invited gatherings and documentary film project funding. Convenings at the Sundance Film Festival, the Skoll World Forum, the Sundance Institute Creative Producing Summit and related gatherings have created a network of learning and professional exchange for documentary filmmakers, change-makers, and their stakeholders. The partnership has also made possible the production of ten new, feature-length independent documentary films that reframe and amplify social entrepreneurship – an innovative approach to the central issues of our time.

The Skoll Foundation drives large scale change by investing in, connecting and celebrating social entrepreneurs and the innovators who help them solve the world’s most pressing problems. It has given almost $300M since 1999, including awards to 91 entrepreneurs in 74 organizations on five continents. The aim? Identify those already bringing positive change around the world and help them extend their reach, tell their stories, and maximize their impact. Jeff Skoll created the Skoll Foundation to help create a sustainable world of peace and prosperity. It has been led by CEO Sally Osberg since 2001 and its Skoll World Forum is the premier conference on social entrepreneurship. www.skollfoundation.org

Sakena Yacoobi’s Afghan Institute for Learning, a grassroots organization she founded 12 years ago, brings education to women in Afghanistan. Due to security concerns about filming a feature-length documentary in Afghanistan at this time, this project is a short film which premiered at the Skoll World Forum in 2010.

An intimate observational documentary that follows three women with limited formal education as they take a life-changing journey from their home villages in Africa and the Middle East to India in order to become educated in solar engineering.

In Bangladesh, solar-powered floating schools are turning the front lines of climate change into communities of learning. As the water steals the land, one man’s vision is recasting the rising rivers as channels of communication and transforming people’s lives.

Poor Consuelo Conquers the World tells the story of popular soap operas and telenovelas that are being used to combat the effects of poverty around the world. The film makes the connection between the fictional stories and the real lives of the fans and shows that in the post-TV/Internet age, radio remains a vital way to reach millions of the world’s poor.

In the slums of Calcutta, children are leading the way to saving lives. Amlan Ganguly, a lawyer turned social entrepreneur, empowers children to become “health minders” in their communities. As a result, malaria and diarrhea rates are dropping, neighborhoods being transformed, and children are blossoming. The Revolutionary Optimists shows both the desperate, flawed world that Ganguly is trying to change and the vibrant, colorful world his optimism is making a reality.

Access to clean water is a human right, but if we cannot talk about why the water is contaminated in the first place, change will not happen. Using animation to look at innovative ways of producing green energy from human waste, SH*T! is a socially minded film that plays fast and loose with taboo and relevant issues. It tells you how to save the planet, improve the economy while you do it, and have a laugh or two in the process. You’ll be sorry you flushed.

Using a technique developed by Search for Common Ground to employ popular culture as a tool for reconciliation, Kenyans scramble to produce a dramatic TV soap-opera series, hoping taboo story lines can bridge deep divisions as their country is wracked by ethnic and tribal tensions in the wake of elections.

To Catch a Dollar: Muhammad Yunus Banks on America

This film journeys with Dr. Muhammad Yunus, 2006 Nobel Peace Laureate and the architect of microfinance, as he continues building opportunities for the poor worldwide through Grameen microcredit and his latest venture, social business. The film chronicles the first year of Grameen America and the challenge of marrying a process proven in developing countries to the American dream of immigrant women in Queens, New York.

This is the story of Partners In Health, a remarkable public health charity organization operating in thirteen of the poorest countries around the world and the controversial man who founded it, Dr. Paul Farmer. Dr. Farmer and his colleagues are larger-than-life heroes to millions, fighting to change the way the world cares for the poorest among us, by insisting on quality health care as a basic inalienable human right.

This feature-length documentary follows a year in the lives of out-of school young people selected for a high-stakes community rebuilding project in North Philadelphia.