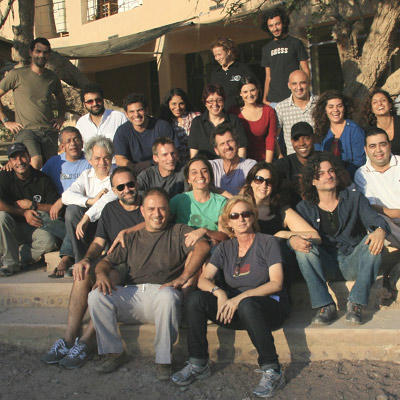 Launched in 2005, the Lab is led by the Royal Film Commission of Jordan (RFC) and managed by Deema Azar, in consultation with Sundance Institute’s Feature Film Program, under the direction of Michelle Satter. The Lab provides an opportunity for filmmakers from the region to develop their work under the guidance of accomplished Creative Advisors—this year including Jeremy Pikser (Bulworth), Najwa Najjar (Pomegranates & Myrrh), Mo Ogrodnick (Deep Powder).  Aseel Mansour (Line Of Sight), Rose Troche (The L Word, The Safety Of Objects) and Jerome Boivin (La cloche a sonné)—in an environment that encourages storytelling at the highest level.

George David, General Manager of the RFC, said, “For the ninth consecutive year, RAWI continues to unveil the regions’ exceptional talent and narratives as part of the RFC’s goal to champion a new generation of Arab film professionals who will represent our noble culture and values, our triumphs and struggles and our hopes and dreams through their films.”

Paul Federbush, International Director of the Sundance Institute Feature Film Program, said, “We’ve had the privilege to help give voice to some extraordinary new filmmakers in the region over our nine-year partnership with the RFC. This year’s Fellows continue in that tradition and bring a diverse range of stories that we believe will resonate with audiences around the world.”

Me, Myself & Murdoch by Yahya Al-Abdallah (Jordan)
After being hit by a car and falling into a coma, a young Palestinian man wakes up and finds he has lost his ability to speak Arabic and can only communicate in Hebrew.

Yahya Al-Abdallah was born in Libya in 1978 and raised in Saudi Arabia. He holds a Masters in Film from EICAR Cinema School in Paris. He found success on the festival circuit in 2008 when his short SMS went to Rotterdam and several other film festivals.

200 Meters by Ameen Nayfeh (Palestine)
After the Second Intifada, a married Palestinian couple find themselves separated by newly erected cement walls that divide the West Bank. When his son falls ill, the husband must find a way to get around the wall and be reunited with his family.

Ameen Nayfeh was born in Palestine in 1988 and spent his formative years moving between Jordan and Palestine. Despite an early interest in filmmaking, in 2010 he earned his B.S. in Nursing from A-Quds University in East Jerusalem. Two years later, he earned a Producing degree from the Red Sea Institute of Cinematic Arts in Jordan with the goal of being able to tell authentic stories from his region. He splits his time between Palestine, Jordan, Germany, and Bahrain.

Tramontane by Vatche Boulghourijian (Lebanon)
A young blind man’s quiet life is rocked when he inadvertently discovers that he has been living under a fake identity for his entire life. He journeys through rural Lebanon in search for the truth about where he comes from.

Vatche Boulghourjian is a Lebanese filmmaker. He holds an MFA from New York University’s Graduate Film Program, where he was a departmental fellow. Fifth Column, Boulghourjian’s thesis film at NYU, received a production grant from the Hollywood Foreign Press Association and in 2010 premiered at the Cannes Film Festival, as part of the Cinéfondation program, where it was awarded Third Prize. His films have screened at festivals worldwide. Boulghourjian is currently developing his first feature Tramontane with the support of the Venice Biennale College Cinema, the Doha Film Institute, Sundance Institute and the IFP.

Sons of Sunday by Rami Kodeih & Nora Salim (Lebanon)
One murder irrevocably changes the lives of three practical strangers who are trying to survive the crime-riddled underbelly of post-war Beirut.

Rami Kodeih completed his master’s degree from Académie Libanaise des Beaux-Arts in 2006. He wrote and directed two short films (A Sheherazade Tale and The Mill), which have screened at several festivals around the world. Rami currently directs corporate films and ongoing documentaries for Al Jazeera and often collaborates with Nora Salim.

Nora Salim first started writing at age fourteen for the local edition of the Los Angeles Times. She went on to study English literature with an Emphasis in Creative Writing at Stanford University, where she also took classes in narrative film and documentary. She is currently working with two-time Oscar-winning director Bill Guttentag and often collaborates with Rami Kodeih as a writer/researcher/producer.

3D (Dirty, Difficult, Dangerous) by Wissam Charaf & Hala Dabaji (Lebanon)
An unlikely love story between an Ethiopian housemaid and Syrian refugee finding solace in each other through their respective struggles in Beirut.

Born in 1973, Wissam Charaf is a Lebanese/French director, news producer, cameraman and editor. In his news work, he has covered major conflicts ranging from Lebanon and the Near East to Darfur, Afghanistan, Haiti and North Korea. His short film An Army of Ants competed in the Locarno Film Festival and won the Jury Prize at the Lunel Film Festival in France.

Hala Dabaji was born in Lebanon in 1981. She earned both her B.A. and M.A. in Fine Arts at the Lebanese Academy of Fine Arts. She works as a multidisciplinary artist in Beirut.

Cairo, Earlier by Ala’a Mosbah (Egypt)
As the Egyptian revolution begins, two teenagers from a small village attempt to get to Cairo in order to be part of the action.

Ala’a Mosbah is an Egyptian filmmaker and author. In 2010 he graduated from the American University in Cairo with majors in Communications and Media Arts, with a minor in Film. He has written several books which have won national prizes in Egypt. Since moving to Doha in 2011, he has been actively involved with the Arabic film scene through producing, writing, and directing many short films. He is currently working on editing his feature documentary The Day I Stop Painting in addition to working in the Film Department at the American University in Cairo.