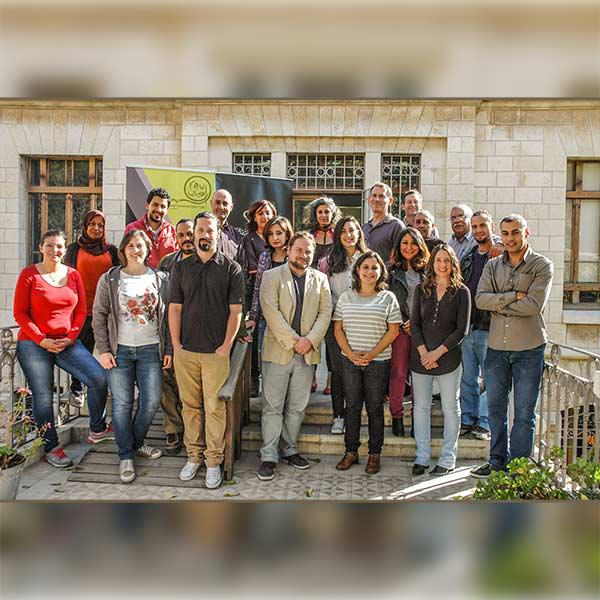 Los Angeles, CA —Sundance Institute and The Royal Film Commission – Jordan announced the six projects selected for the 10th anniversary of the Rawi Screenwriters Lab, which took place October 28 to November 1 in Amman, Jordan. Created as a cornerstone of the Institute’s deep commitment to artists in the Middle East, the Lab has supported over seventy artists from more than a dozen countries.

More recently, 2009 Rawi alumna Haifaa Al Mansour (Saudi Arabia) premiered her first feature Wadjda at the 2012 Venice Film Festival. It was soon acquired by Sony Pictures Classics and was distributed to critical and audience acclaim from around the world. Wadjda is the first feature film shot entirely in the Kingdom of Saudi Arabia and the first ever by a Saudi female filmmaker.

The 10th anniversary events in Amman included a panel on the craft of screenwriting led by Al Mansour, a public screening of Zindeeq by Lab Advisor Michel Khleifi, and a reception designed to connect local artists with filmmakers from across the region.

Keri Putnam, Executive Director of Sundance Institute, said, “Stories told by independent artists, whether working in the U.S. or internationally, provide remarkable windows into other cultures, and deepen understanding. Ten years into our work in the Middle East, we look forward to continuing to  give voice to artists in the region.”

Michelle Satter, Founding Director of the Feature Film Program, said, “We deeply value our collaboration with the Royal Film Commission as well as the artists we have supported in the Middle East over the past 10 years. The films that have emerged from the Lab have reflected upon many of the region’s important cultural and political moments over the past decade. I am proud to see the work of these  artists enriching the broader culture with unique and impactful stories.”

George David, General Manager of the Royal Film Commission, said, “We are proud of what this Lab has accomplished over the past ten years. It is safe to say that Rawi, with the support of the Sundance Institute has become a recognized contributor to the development of Arab feature films. Cinematic works, which were born in Rawi, have been featured in major films festivals and released in cinema screens globally, exposing our Arab culture and heritage to the world.”

Modeled on the Institute’s renowned US-based Screenwriters Labs, the Rawi Screenwriters Lab provides an opportunity for filmmakers from the Middle East region to develop their work under the guidance of accomplished screenwriters in an environment that encourages storytelling at its highest level. The Lab is led by the Royal Film Commission of Jordan and managed by Deema Azar, in consultation with Sundance Institute’s Feature Film Program, under the direction of Founding Director Michelle Satter and International Director Paul Federbush.

The six artists selected for the 2014 Rawi Screenwriters Lab include:

Shake
Writer and Director: Deema Dabis (Jordan)
Free-spirited Kareemah decides to leave her home in Los Angeles to pursue her lifelong dream when she accepts an offer to tour Palestine with an international circus troop. As she struggles to manage her insecurities as a first-time performer, she is continuously shaken up by the complexities of life in Palestine.

Dabis received an MFA in Cinema from the Red Sea Institute of Cinematic Arts. From a young age she has always been in love with stories and believes fiercely that the power of creation and a new vision will not only bring healing and insight into our world but also has the potential to create alternative narratives and realities. She is working on a number of projects including her first short film The Sri Lankan, which received funding from the Jordan Film Fund.

Baghdad Perfume
Writer and Director: Roua Ahmad (Iraq)
The tale of a middle-class family and their struggles during the darkest period in Iraq between 2004 and 2006. As the occupation becomes more oppressive and water and electricity begin to run out, the family of three tries to stay together through kidnapping, illness, and the increasing danger of staying in Baghdad.

Ahmad was born on 1983 in Iraq. She received a certificate of participation from USC School of Cinematic Art and a Bachelor’s degree in Computer Programming. She later got her MFA in Directing and Editing from The Red Sea Institute of Cinematic Arts. Filmmaking has been her ambition since the age of 12. After graduation she worked as an editor and screenwriter for a television production company. Her short films include The Last Hour, and have been screened and nominated for awards in 12 film festivals around the world.

Killer of the Selawa
Writer and Director: Islam Azzazi (Egypt)
Co-Writer: Charles Akl (Egypt)
In the tense atmosphere following the revolution in Egypt, a man spends the night in a remote villa on the outskirts of Alexandria, trying to obtain a permit for his father’s weapons. After news spreads of a vicious, mythical beast in the area, the man finds himself caught up in a murderous accident.

Since his Dostoyevski inspired thesis project, Al-Kharaz (Beads), Azzazi has directed and produced numerous Documentaries and short films. His documentaries include Wujouh Al-Fayoum (Fayoum Portraits) and Dominate Your Eyes. He has also produced and directed the short film Nahar we Leil (Day & Night), 2006. Azzazi has worked at El-Warsha Theatre Company where he coached actors and photographed theatrical productions. In 2007 he established a new production company WIKA with three other filmmakers.

Charles Akl works as a writer, director, editor, art critic and photographer. After graduating from the University of Alexandria’s Faculty of Fine Arts in 2006, he has worked in several domains ranging from architecture design to writing and editing for several arts publications, including Magaz. Akl has also worked as the program coordinator at Al Mawred Al Thaqafy.

Tide
Writer and Director: Hussen Ibraheem (Lebanon)
A man and woman struggle in the aftermath of their son’s death. As the tide approaches their coastal home and they make their way by car to a relative’s house in the mountains, they must confront the tension the tragedy has created between them.

Ibraheem is an independent filmmaker, born in Beirut, Lebanon. After getting his BA in Architecture, Ibraheem followed his love for animation working as a freelance storyboard artist and character designer. Ibraheem was granted a scholarship from The Red Sea Institute of Cinematic Arts where he studied directing and cinematography. His second short film produced at RSICA, Typo, is currently touring 13 film festivals in Poland, Bulgaria, Hungary, Greece, USA, UK, and Italy.

The Golden Cap Club
Writer and Director: Merva Faddoul (Lebanon)
A young girl comes of age as the organized world of the adults crumbles during the invasion of Kuwait in the early 1990s. Determined to win a trip to Disneyland, she collects bottle caps in an attempt to find the ‘golden cap,’ as her family tries to distract her from the sudden challenges they face.

Faddoul is an award-winning writer and director. She recieved an MFA in Film Production from the University of Southern California and a BA in Communications from the Lebanese American University. Her short films have won grants from National Geographic and the Doha Film Institute and they have screened at dozens of festivals worldwide including the Cannes Short Film Corner, Human Rights Nights (Italy), Doha-Tribeca Film Festival, and Tricycle Cinema in London. She is a member of the Writers Guild of America and the International Academy of WebTV.

Snow
Writer and Director: Omaima Hamouri (Palestine)
Eight year-old Dina believes that an old family curse is behind the conflict that arises each summer between her parents, and becomes convinced that snow is the only way to solve their problems. With the help of her grandmother, she resolves to delay her parents’ divorce until the first snowfall.

Hamouri was born in 1988 in Jerusalem. She received her bachelor degree in Mass Media from Al-Quds University, followed by an MFA in Editing and Screenwriting from the Red Sea Institute of Cinematic Arts in Jordan. With a never-ending passion for telling human stories through film, Omaima is now working as an independent filmmaker.