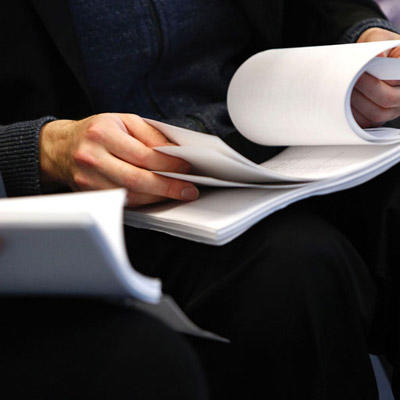 Los Angeles, CA — The seven artists and projects that participated in the seventh annual Rawi Screenwriters Lab were announced today by The Royal Film Commission-Jordan and Sundance Institute. The Lab was held October 30 through November 3, with Fellows from Algeria, Jordan, Lebanon, Palestine and Syria participating, as well as Creative Advisors from the U.S., Europe, the Middle East and South America. The Lab is part of the Sundance Institute Feature Film Program’s work to support emerging filmmakers around the world.

Launched in 2005 and held in Wadi Feynan, Southern Jordan, the Lab provides an opportunity for filmmakers from the region to develop their work under the guidance of accomplished Creative Advisors in an environment that encourages storytelling at the highest level.

“As an organization that seeks to discover emerging talent, we understand the importance of supporting voices from regions where change is happening,” said Keri Putnam, Executive Director of Sundance Institute. “The Rawi Screenwriters Lab allows us to build and sustain our support of these artists at a critical time in their personal histories and cultures.”

Mohannad Al-Bakri, Capacity Building Manager at the Royal Film Commission-Jordan, expressed his excitement with the newcomers and their projects: “Over the past six years, Rawi has nurtured a new generation of filmmakers with a vision for a changing Arab identity.  It gives us great pride to see stories developed in the early years of Rawi become films seen around the world.  Needless to say, none of this would be possible without our partners’ support.”

“Now in our seventh year, we continue to be impressed by the strength of the writing and diversity of storytelling in the projects submitted to the program,” said Alesia Weston, Associate Director of the Sundance Institute Feature Film Program, International. “It is a privilege to work with the RFC and be part of the artists’ journey bringing these stories to life.”

The participants and projects selected for the 2011 Rawi Screenwriters Lab are:

On a final exam day at a school in Lebanon in 1982, eleven-year-old Wissam is intent on declaring his love for his classmate Joanna. He has trouble finding the courage to do so until an unexpected event occurs, bringing them together and changing their perception of the world.

Oualid Mouaness producing work includes Rize (2005 Sundance Film Festival) and Kitchen Privileges (SXSW 2000) and has directed several shorts including Saint in the Sun. The Liberian-born Mounaness received his undergraduate degree in Lebanon and acquired an MFA at FSU before moving to Los Angeles.

Blessed Benefit tells the story of Ahmad, a construction worker who gets tangled up in an unfortunate business deal leading him to prison. He meets fraudster Khaled, who ruins his last hope to prove his innocence. Ahmad comes to the realization that life in prison might be better than the one that he has on the outside.

Mahmoud Al Massad is an award-winning Palestinian-Jordanian filmmaker whose films have screened at over 120 regional and international film festivals. His documentaries This Is My Picture When I Was Dead and Recycle were released theatrically in several European countries. Since 2002, his films have screened in educational filmmaking programs and film academies in Europe.

The Eye of the Devil
By Katia Jarjoura (Lebanon)

The Eye of the Devil is a story about Iraq, 1988. In a country devastated by war and controlled by a merciless dictatorship, a courageous housewife is hiding her brother, a deserter, while trying to hold the family together.

A Lebanese-Canadian filmmaker, Katia Jarjoura is the director of several documentaries, including Goodbye Mubarak! the Road to Kerbala and Caught in Between. Her short film In their Blood won the France 2 Award at the Brest Film Festival.

A Few Days in Syria
By Ahmad Ameen (Jordan)

A Few Days in Syria follows a TV news reporter who seeks a new beginning for herself and son when what looks like a revolution has started in Syria. The story is about Haya and her family who are trying to survive the consequences of not taking sides in the middle of a burning political situation.

The First Full Moon tells the story of Zulal Kazazian who can’t seem to get pregnant or make art that is taken seriously. Devastating events lead her from New York back to Aleppo, a place she’s avoided for 20 years, to break a “curse” she has always believed was placed on her. The journey brings her face to face with her family’s darkest secrets.

Sona Tatoyan is a first generation Syrian-Armenian-American actress, producer, writer and director living in New York. As an actress she has worked extensively around the US. As a filmmaker she recently completed a short, Toujours. The First Full Moon will be Tatoyan’s feature debut as writer-director.

Honey Cigar is a story that takes place in Paris, France, 1993 of Selma, an awkward teenager who fantasizes impossible love stories. When Jerome, a free-spirit hunk, falls for her, she trashes all the values of her traditional upbringing to fit into his world. Her emancipation affects the love and sex lives of her cousins Zeina, Nadia and Minouche and ultimately shatters the balance of power between men and women in their Algerian family.

Algerian filmmaker Kamir Aïnouz was born in Paris and worked in financial news in New York and London before turning to film. She studied filmmaking at USC and screenwriting at UCLA and has  been working on the US remake of the French mother-daughter comedy LOL and a biopic of Egyptian-born singer Dalida. Honey Cigar is her first original script.

Solitaire King follows ex- prisoner Ziad, post solitary confinement. He drives a cab between check points, increasingly unable to distinguish between reality and fantasy. His obsession with a beautiful passenger, Mirvat makes his search for sanity especially difficult. He struggles with her disdain and the increasingly difficult circumstances force him to confront his options in a new light.

Bassam Jarbawi received an MFA in screenwriting and directing from Columbia University in New York.  His short film Chicken Heads was awarded best film at several international festivals, including the Golden Muhr Award at the Dubai Film Festival.

The seventh annual Rawi Screenwriters Lab of The Royal Film Commission-Jordan is presented in consultation with Sundance Institute and made possible in part by a grant from the Doris Duke Foundation for Islamic Art.

Royal Film Commission – Jordan
The Royal Film Commission (RFC) was established in July 2003 with a mandate to promote for and contribute to the development of an internationally competitive Jordanian audio-visual industry. It provides training in filmmaking, production support services and organizes screenings all over the country. The RFC is a Government organization, financially and administratively autonomous, headed by a Board of Commissioners chaired by Prince Ali Bin Al Hussein. www.film.jo