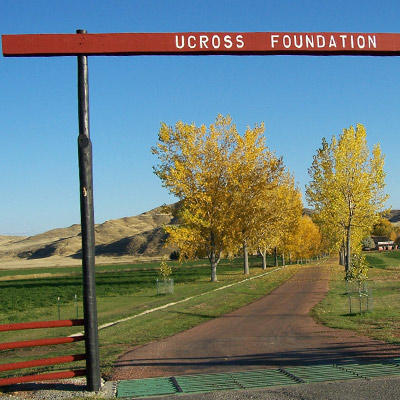 New York, NY — Sundance Institute today announced the seven artists selected for its 2014 Playwrights Retreat at Ucross Foundation. The 15th annual writing colony at the 20,000-acre working cattle ranch outside of Sheridan, WY takes place February 3-21. Under the supervision of Artistic Director Philip Himberg and Producing Director Christopher Hibma, the Playwrights Retreat is made possible through the generosity of Ucross Foundation.

Himberg said, “Our Playwrights Retreat at Ucross Foundation celebrates a milestone 15th anniversary this year, and we are pleased to continue this unique collaboration between Sundance Institute and the renowned Ucross Foundation. The Retreat provides a rare opportunity for theatre artists to begin new projects and refine drafts while creating an intimate community of theatre makers. Sundance Institute dramaturg Mame Hunt is on hand to guide and respond to the writing.”

Notable artists and projects supported in previous years through the Playwrights Retreat program include A Gentleman’s Guide to Love and Murder by Steven Lutvak and Robert L. Freedman (Hartford Stage Company and La Jolla Playhouse, Broadway), Song for the Disappeared by Tanya Saracho (Goodman Theater, Chicago), ToasT by Lemon Anderson (Under The Radar), and Appropriate by Branden Jacobs-Jenkins (Woolly Mammoth, Washington D.C. and Signature Theatre, NYC).

The seven artists selected are:

Eisa Davis
Plays include Bulrusher (Pulitzer Prize finalist), Angela’s Mixtape, Ramp (Ruby Prize), The History of Light, Warriors Don’t Cry, the musical Flowers Are Sleeping, and the collaborations Hip Hop Anansi and Active Ingredients. Recent performing credits in theatre include The Cradle Will Rock (Encores), David Auburn’s new play Lost Lake (O’Neill), Luck of the Irish (LCT3), The Call, This (Playwrights Horizons, CTG), the rock musical Passing Strange; the films Free Angela, Welcome to the Rileys (opposite James Gandolfini), In The Family, The Architect, Robot Stories, The Volunteer and Jack Ryan (both upcoming); and the television series The Wire, Damages, Smash, and Hart of Dixie. In addition, her songs were featured regularly on the Showtime series Soul Food. Eisa has received two Obie Awards, the Helen Merrill Award, and fellowships from the MacDowell Colony, Yaddo, Cave Canem, the Van Lier and Mellon Foundations. She was an artist-in-residence at Symphony Space, a resident playwright at New Dramatists, and was the 2012 winner of the Alpert Award in Theatre. She is the 2013/14 Arthur Levitt Fellow at Williams College. Something Else and Tinctures are albums of her original music.

Frank London
Frank London is a member of The Klezmatics, winning a Grammy Award for Best Contemporary World Music for their recording, Wonder Wheel (lyrics by Woody Guthrie). He composed 1001 Voices: A Symphony for Queens, Talmud Texts for poet Jake Marmer and the Ayn Sof Arkestra, the multimedia Jewish opera A Night in the Old Marketplace, Brass and Percussion Quartets for Carnegie Hall, Wachauer Begegnungen for folksinger Norbert Hauer, improvising soloists, and 90-piece wind ensemble Trachtenkappelle Rossatz in Austria, and the opera Green Violin. He has played with Angelique Kidjo, Youssou N’dour, Omara Portuando, Itzhak Perlman, David Byrne, Karen O & the Yeah Yeah Yeahs and Iggy Pop, and is featured on over 300 recordings.

Dave Malloy
He has written music for seven full-length musicals, most recently Natasha, Pierre & The Great Comet of 1812, an electropop opera based on War & Peace, for which he was also librettist, orchestrator and Pierre. Comet premiered at Ars Nova in the fall of 2012, winning a Richard Rodgers Award and a Special Citation OBIE, before transferring to Kazino, a Russian supper club built specially for the show. He is also one of the co-creators/performers of Three Pianos, a drunken romp through Schubert’s “Winterreise” (Ontological-Hysteric Theater, New York Theater Workshop, American Repertory Theater; 2011 Special Citation OBIE Award), and the composer for the Brooklyn-based ensemble Banana Bag & Bodice. Other musicals include Beowulf – A Thousand Years of Baggage; Beardo; Sandwich; and Clown Bible. Other notable shows include (The 99-cent) Miss Saigon, a shoe-string adaptation complete with a toy helicopter on a zip line, and pieces with Hoi Polloi, Witness Relocation, Clubbed Thumb, and Shotgun Players. He won a 2009 Jonathan Larson Grant and the 2009-11 NEA/TCG Career Development Program Grant for Theatre Designers. He has been a Guest Professor in devised music theater at Princeton and Vassar Universities. Upcoming: Black Wizard / Blue Wizard at the Incubator Arts Project, with co-creator/performer Eliza Bent. He lives in Brooklyn.

christopher oscar peña
He is originally from California and now resides in Manhattan. Selected plays include maelstrom, icarus burns, alone above a raging sea, l(y)re, the suicide tapes and awe/struck. His play with composer Melissa Lusk i wonder if it’s possible to have a love affair that lasts forever? or things I found on craigslist will close the University of Illinois-Chicago School of Theater’s LAUNCH year season in 2014. He is the creator and co-star of 80/20, a new series for the web, which was recently named an Official Selection at the 2013 New Media Film Festival in LA, and won the 2013 Outstanding Achievement in writing from LAWEBFEST. His newest play TINY PEOPLE (or, it gets better) was featured in the 2013 Crossing Borders Festival at Two Rivers Theater. Awards/fellowships: Latino Playwrights Award (Kennedy Center), New York Theatre Workshop Emerging Artist Fellow, Playwrights Realm Writing Fellow, Sewanee Writers Conference Fellow, US/UK Exchange (Old Vic New Voices). His play a cautionary tail received its professional world premiere at The Flea Theater in 2013. He is working on a new commission from Chicago’s Goodman Theater where he is in residence as a member of their Playwrights Unit. He was the Lark Play Development Center’s 2012-2013 Van Lier Fellow and is currently a 2013-2014 Fellow in the Lark’s Playwrights Workshop. The first collection of his work is forthcoming from NoPassport Press.

Roxie Perkins
A San Francisco Bay Area native, Roxie Perkins is a graduate from UCLA’s School of Theatre, Film, and Television with a BA in playwriting and directing. Her work has been produced at CalArts, UCLA’s MFA New Play Festival, A Working Theatre, The Shed, and UCLA’s MFA Francis Ford Coppola One Act Marathon. As the 2013 recipient of the Dr. Floyd Gaffney National Playwriting Award, her play, RUN, was featured in UCSD’s MFA Wagner New Play Festival. She is a Teaching Artist at Berkeley Repertory School of Theatre and resides in
Los Angeles.

Shaina Taub
Shaina is a songwriter and performer, raised in Vermont and living in Brooklyn. She was Ars Nova’s 2012 Composer-in-Residence. Her original soul-folk opera, The Daughters, was a finalist for the Richard Rodgers Award and has been developed by the Yale Institute of Music Theater and CAP21 Theater Company. She is currently writing songs for two new musicals: There’s A House, commissioned by the Oregon Shakespeare Festival, with playwright, Kim Rosenstock, and Robin, commissioned by Ars Nova, with playwright Jen Silverman. She has developed songs for Walt Disney Imagineering, been a member of the Johnny Mercer Songwriter’s Project, and recently gave a TEDx Talk on why artistic communities are crucial to creativity. As a singer/ songwriter, she plays regularly in New York with her trio, has released two albums, What Otters Do and Shaina Taub Trio, and her headlining Joe’s Pub concert was featured on NPR/WNYC’s Best Gigs of the Year. She has traveled the world as a musician and performer, appearing on stages from Abu Dhabi to Germany to Nashville, and venues including the Sydney Opera House, the Kennedy Center and the Beacon Theater. She has received a MacDowell Fellowship, a Yaddo Fellowship, served on the music theater faculty at Pace University and is a University Scholar alumnus of NYU’s Tisch School of the Arts. Shaina is currently playing the role of Mary in the critically acclaimed electropop opera, Natasha, Pierre & The Great Comet of 1812.

Elise Thoron
Elise’s musical plays have been produced in the United States and Europe: Green Violin, music by Frank London of the Klezmatics; Prozak and the Platypus, music by Jill Sobule; Charlotte: Life? or Theater?, music by Gary Fagin. As writer/director: Recycling: washi tales in collaboration with Karen Kandel and company of Japanese traditional performers, commissioned/premiered at The Krannert Center for the Performing Arts; also Los Angeles County Museum (2011), Hong Kong, Singapore (2014). For 20 years, Elise has created cross-cultural exchanges with Russian and American theater artists. She directed the first Sam Shepherd play in Moscow; adapted and directed The Great Gatsby in Russian at a The Pushkin Theater in Moscow, where it played for over nine years. As Associate Artistic Director at American Place Theatre, Elise developed and directed many new plays and solo shows. She also co-founded with Wynn Handman Literature to Life, a theater literacy program, now nationwide where Lemon Andersen’s County of Kings was first developed for students, before performing at The Public, Spoleto, and venues around the world. Elise is thrilled to be working again with Lemon on his new play ToasT, developed at Sundance Institute Theater Lab and the Ucross Foundation, at the Public Theater; and writing a new opera, Memory of Fire: Hatuey, with composer Frank London.

Sundance Institute Theatre Program
The Theatre Program has been a core component of Sundance Institute since Robert Redford founded the Institute in 1981. The Theatre Program identifies and assists emerging theatre artists, contributes to the creative growth of established artists, and encourages and supports the development of new work for the stage. Under the guidance of Artistic Director Philip Himberg and Producing Director Christopher Hibma, the Theatre Program is one of the leading play development programs in the United States. Titles such as Spring Awakening, An Iliad, I Am My Own Wife, The Good Negro, Circle Mirror Transformation, Passing Strange, Grey Gardens, Crowns and Marie Antoinette have gone from Theatre Program Labs to production from coast to coast and internationally, garnering multiple Pulitzers, Tonys, OBIEs and other recognition. The Theatre Program’s East Africa initiative is the only professional program of its type on the continent, offering Labs, cross-cultural exchange, mentorship and exposure to artists in six African countries. The Theatre Program’s newest initiative is the Theatre Directors Retreat at Domaine de l’Armellière in Arles, France. sundance.org/theatre

Ucross Foundation
Founded in 1981, Ucross Foundation is an internationally known retreat for visual artists, writers, composers and choreographers working in all creative disciplines. It provides living accommodations, studio space, uninterrupted time and the experience of the extraordinary High Plains landscape to competitively selected individuals. Ucross supports individuals whose work reflects innovative thinking, a depth of creative exploration, and the potential for significant future accomplishments. A number of residents have won recognition such as the Pulitzer Prize, the Tony Award, the National Book Award, the MacArthur Fellowship, the Guggenheim Fellowship and many other honors. Through its Residency Program, art gallery, and associated activities, Ucross actively seeks to support an appreciation for vibrant human creativity and aims to cast a reflection into the future from the cultural mirror of our lives and times. ucrossfoundation.org