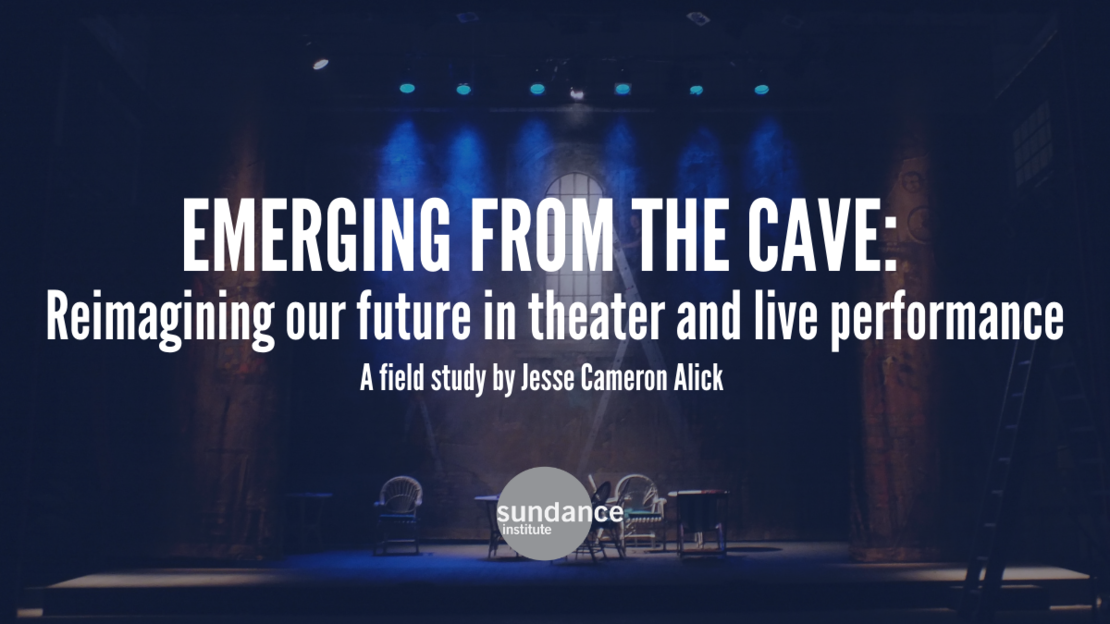 Los Angeles, CA, August 4, 2021—In early 2021, nearly a year into a global pandemic, Sundance Institute commissioned Jesse Cameron Alick, the newly-appointed Associate Artistic Director for the Vineyard Theater in New York and past creator advisor to the Institute’s Theater Program, to launch an in-depth field study to hear directly from theater makers about the most urgent needs of artists and the field. The commission began as part of the Institute’s effort to re-imagine its own work in the field of theater and live performance. The report that resulted yielded the work published today: Emerging from the Cave: Reimagining Our Future in Theater and Live Performance, available at emergingfromthecave.com.

The Institute has supported theater and live performance artists through lab and residency programs since 1984, and since the 2019 departure of longtime program director Philip Himberg, has been in a transition, assessing and tailoring programs to best meet the field’s needs. The COVID-19 pandemic forced a contraction of the Institute’s programs, including the theater program, with support of these artists continuing on in different forms through a new Interdisciplinary Program.

Between January and April 2021, Alick interviewed over 70 artists, administrators, donors and leaders from around the world about their experiences during the pandemic with the Black Lives Matter uprising and the summer’s racial equity reckoning; what they learned, what they lost, the state of the industry now and their thoughts on how to bring the field back in a stronger, more equitable and more vibrant way. With people starting to emerge from their caves, this study is a snapshot of where theater and live performance stand more than a year after current constrictions began, and a road map from some of the most creative and visionary minds in the field: a possible compass for the future.

“We are beginning a conversation that we hope artists, funders, and organizations will continue in order to provoke new modes of support. We understand that some of these issues are not solvable by arts organizations alone. In fact, we feel strongly that a lot of the solutions need to originate from places outside the institutions,” said Keri Putnam, CEO, Sundance Institute. “We are inspired by the common themes, the provocations, the power of collective action that is embedded in these calls to action from across the field. We hope people will read, discuss, and engage with the conversation started in this study, presented and collected by Jesse Alick.”

“When the pandemic hit, I truly didn’t know what to do,” said Jesse Cameron Alick. “I saw my industry fall apart overnight and the art I love rendered impotent as all my friends immediately went on unemployment. A way out felt impossible. But when summer hit and we poured into the streets in the Black Lives Matter protests, a conversation about the future of the field started which I found comfort and hope in. I started to listen to people much smarter than myself. With the help and support of Sundance Institute, this study is the result of that journey. It belongs to the great arts workers that I interviewed but in a very real way it also charts the way I found my way out of darkness and into possibility.”

The independent study conducted with industry professionals from around the globe features 40 women; 34 men; and 2 gender-nonconforming individuals, with a total of 5 trans participants. And 72% BIPOC artists are represented with 22 identifying as Black; 21 White; 13 Latinx; 9 AAPI; 5 MENA; 3 South Asian; and 3 Native/Indigenous.

“This study is an invaluable resource,” said Tony Award Winner and Sundance Institute Board of Trustees Member Lisa Kron. “If you’re looking for clues to the road forward for our unsettled field, I highly recommend a deep dive into the lucidly rendered interviews here, which contain a wealth of observation, insight, and analysis from practitioners from across the forefront of contemporary theater.”

HIGHLIGHTS:
Alick found in these interviews that there were many things people agreed on — especially the notion that during this time period, artists have been innovating like never before. The interviewees also expressed:

Artists are looking for long-haul commitments from institutions, long-term investment in projects, project follow-up, fluid development support, and full-time employment. These are investments that, if made now, could have a major impact on the art that is created over the next decade.

It was widely acknowledged how necessary and enriching it was for the human spirit to physically experience art “AFK” (away from keyboard). Having said that, New Media technology that marked this past year is undeniable. Artists are actively engaged in a dynamic investigation of new forms with multi-platform, multi-model expressions of live performance. These new explorations of the live digital body have brought about an investigation into what “live performance” even means. And the most popular new idea that surfaced in these interviews was the need for the field to have a place where we can collectively engage in big conversations.

Full profiles on all the interviewees and the complete study are available at www.emergingfromthecave.com.

“For the last 15 years I’ve known Jesse and witnessed him working as a Black dramaturg in America. He is a tireless advocate for artists and new work,” said Pulitzer-Prize winning playwright and study participant Suzan-Lori Parks. “During our recent cultural reckoning, it was no surprise that Jesse went to artists first in order to discover what they needed to thrive in this new world. This report of his is thorough, compassionate and groundbreaking. With it, he is establishing himself as a major and preeminent thinker in our field and that in itself is a thrill to watch.”

ABOUT JESSE CAMERON ALICK
Jesse Cameron Alick was recently named the new Associate Artistic Director at the Vineyard Theater in New York. He is a dramaturg, producer, poet, playwright, essayist, artistic researcher and science fiction expert. Born and raised Buddhist high in the mountains of Montana, Jesse is a first generation American born of Grenadian descent. He moved to New York City at 17, began working as a spotlight operator and over the course of his first three years in the city worked for a myriad of off off broadway companies doing everything from working as a box office manager, to lighting board op, to program folder, back stage crew, theater rental manager, and hip hop poetry teacher. Jesse co-founded the Subjective Theater Company at 19, moved on to become the company’s first resident playwright and then eventually took the helm as Producer and Artistic Director. Jesse ran Subjective for 10 years and staged 15 full productions around Manhattan and Brooklyn. He was at the Public Theater for 15 years and for the last 5 was the Company Dramaturg, where he planned bespoke development paths for projects, from acorn to oak. He managed a commissioning program with over 20 ongoing projects, worked on readings and workshops, was a production dramaturg, and ran programs such as the Emerging Writers Group and Public Lab/Public Studio. Jesse was involved in all the artistic development that fed plays into the Public’s season pipeline. Outside the Public, he is an active freelance dramaturg at various off-Broadway theaters in the city, nationwide and in the UK. He studied writing with Adrienne Kennedy and has taught theater courses, lectured at classes and mentored students at a myriad of programs (Lewis and Clark, NYU, Goddard, UT Austin, Primary Stages, Playwrights Horizons school, Fordham). www.jessecameronalick.com

SUNDANCE INSTITUTE:
As a champion and curator of independent stories for the stage and screen, Sundance Institute provides and preserves the space for artists in film, theater, film composing, and digital media to create and thrive. Founded in 1981 by Robert Redford, the Institute’s signature Labs, granting, and mentorship programs, dedicated to developing new work, take place throughout the year in the U.S. and internationally. Sundance Co//ab, a digital community platform, brings artists together to learn from each other and Sundance Advisors and connect in a creative space, developing and sharing works in progress. The Sundance Film Festival and other public programs connect audiences and artists to ignite new ideas, discover original voices, and build a community dedicated to independent storytelling. Sundance Institute has supported such projects as Clemency, Never Rarely Sometimes Always, Zola, On The Record, Boys State, The Farewell, Honeyland, One Child Nation, The Souvenir, The Infiltrators, Sorry to Bother You, Won’t You Be My Neighbor?, Hereditary, Call Me By Your Name, Get Out, The Big Sick, Mudbound, Fruitvale Station, City So Real, Top of the Lake, Between the World & Me, and Wild Goose Dreams. Join Sundance Institute on Facebook, Instagram, Twitter and YouTube.

The Sundance Institute Theater Program has provided a catalytic process of artistic development for independent theater-makers in the United States and globally, using a range of artist-driven engagement opportunities that connect, support, and sustain artists and their projects across their careers. The Program is currently on hiatus and theater and live performance artists are being supported by a new Interdisciplinary Program during the pandemic period.

The Theater Program has advanced the work of risk-taking theatre artists by providing rare developmental opportunities that support artists throughout their careers. By providing a continuum of support, the Program has contributed to a meaningful and engaging cultural dialogue between artists and their audiences. The Theater Program’s international activity has supported mentorship and cross-cultural exchanges, focusing on artists from Arabic-speaking countries based in the Middle East, North Africa, and Europe. The Program has a long history of supporting the development of U.S. and international new work for the stage, including projects such as Appropriate; Fun Home; A Gentleman’s Guide to Love and Murder; Taha; Circle Mirror Transformation; An Iliad; The Lily’s Revenge; Happy New Fear; The Good Negro; A 24-Decade History of Popular Music; The Light in the Piazza; Passing Strange; Spring Awakening; Boredom; The Laramie Project; 36 Abbas Street; I Am My Own Wife; and Night. To explore more projects that the Sundance Institute Theater Program has supported, click here.