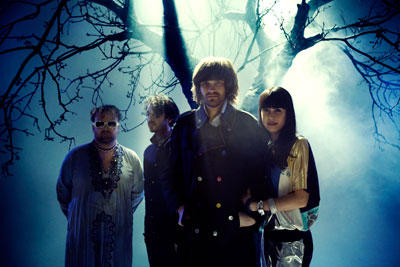 London, 12 April 2012 — Sundance Institute and The O2 announced today that BRIT Award-nominated psychedelic pop band Guillemots and Academy Award-winning musician/actor Glen Hansard will join the Opening Night Event An Evening with Robert Redford and T Bone Burnett at the first-ever Sundance London film and music festival on 26 April at The O2. Guillemots and Glen Hansard will perform separately during the event.

These performances will enhance the conversation between filmmaker, actor and Sundance founder Robert Redford and 12-time Grammy Award winning  musician, songwriter, and soundtrack and record producer T Bone Burnett about the relationship between film and music. Redford and Burnett will share their recollections of achieving great musical moments with the many filmmakers, actors and musicians they’ve collaborated with throughout their storied careers. Joined on stage by Nick Hornby (High Fidelity), who will moderate the evening, the two artists of ‘sound and screen’ will utilise film clips from some of the many films they’ve worked on for which music made an indelible contribution. Redford and Burnett will also discuss some of their favourite musical moments from other great films that have influenced their work.

Guillemots are: Fyfe Dangerfield, Magrão, Aristazabal Hawkes and Greig Stewart. Formed in 2004, they make music that works and moves on many levels, for many people. Their Mercury-nominated 2006 debut album, Through The Windowpane, broke into the Top 20 and eased their 2008 follow-up, Red, into the Top 10. The quartet’s third album, Walk The River, is a collection as elemental, timeless and awe-inspiring as the deep, green countryside surroundings in which it was created.

Guillemots said: “Would Guillemots like to hang out onstage with Robert Redford and T Bone Burnett and play a few songs too? Well, yes, we would actually! This is definitely a pretty good way to spend an evening.”

Hansard is best known as the principal songwriter and vocalist/guitarist for Irish group The Frames and as one half of acclaimed duo The Swell Season. His acting credits include appearing in BAFTA-winning film The Commitments, as well as starring in Once, which premiered at the 2007 Sundance Film Festival, where it won the World Cinema Dramatic Audience Award. His song “Falling Slowly” from Once, co-written with Markéta Irglová, won the Academy Award for Best Original Song in 2007 and earned him several other major nominations or awards. In recent months Hansard has been seen in the documentary The Swell Season, contributed two songs to the blockbuster soundtrack, The Hunger Games, and been active in the promotion of Once, The Musical, which opened on Broadway. His first solo album, Rhythm and Repose, will be released June 18.

Previously announced events and performances for Sundance London include: a rare intimate concert performance by Placebo; Tricky and Martina Topley-Bird performing Maxinquaye; a performance by Rufus and Martha Wainwright following the world premiere of Lian Lunson’s film about the music of their mother, folk singer Kate McGarrigle; and screenings of 14 feature-length and eight short films from the 2012 Sundance Film Festival in Park City, Utah, U.S.A.